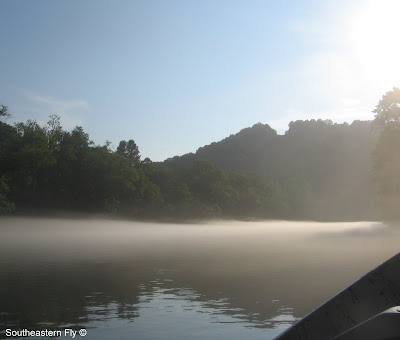 Foggy and Calm on the Caney Fork

Mike and Jim came up to fish the Caney Fork River via Woodstock GA. I met them at Mike's motor home and we loaded their gear into the truck for the quick ride to the access. Mike has been fly fishing for over twenty years and Jim has been fly fishing a little less than ten years. Both are accomplished anglers and we went searching for bigger fish. The day started out with a little fog, but it was predicted to be sunny and hot. 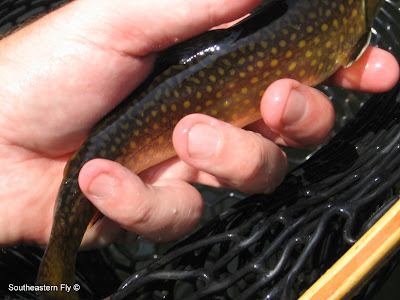 The Brookies are "Coloring-up" Nicely 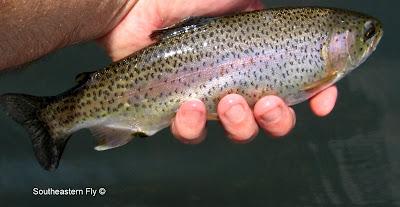 We Got Into These Early and Often
Mike took the rear casting brace, while Jim fished from the front deck of the drifter. Jim started the day off with a bluegill and quickly moved onto trout when the water turned off. As the water began to settle down Mike joined in with some bows of his own. We fished nymphs early among the many canoes, boats and pontoons. It was combat fishing at its finest. The guys were troopers though and never complained...but we did have some good discussion.

A Fresh Hatchery Brat
One part of the dam repairs consists of drilling over 1100 holes in the limestone and filling the holes with grout. The water level in the lake needs to remain approximately 630 feet (above mean sea level). The Army Corps is charged with keeping the lake level at about 630, therefore the releases, from the dam, will track pretty close to the rainfall. The easy way to remember the water release process while the repairs are underway is....Water In Water Out. 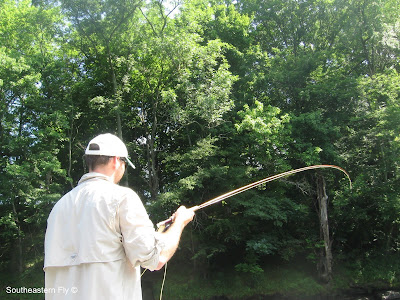 Jim Working on the Slam
So the guys continued fishing nymphs, we added streamers, then went with dries and other topwater patterns. They caught their share of the usual fish and Jim completed a slam, but we didn't hook up with the big one, this time. It certainly wasn't from their lack of effort. These two were troopers and fished hard up until the end. Jim threw the streamer all the way to the ramp as the sun disappeared and the thunderstorms moved into the area.
It was a pleasure to fish with a couple of fine anglers and genuinely nice guys for the day. 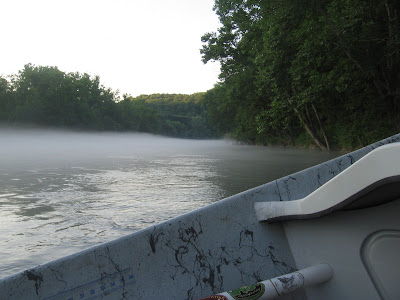 The Day Ended as the Day Began....Foggy and Clear