There is one thing about living close to the Home of Country Music and that is the opportunity to hear some talented artists. This morning my family and I were invited to attend church with a good friend and his family. It was a bluegrass service and there were a couple young ladies performing, as they do most Sundays. Anna Grace and Sarah make up the duo High Road. Today they were performing with a small bluegrass band, in a small southern church and they did an amazing job.

Saturday, David and Nathan came along for a trip on the Caney Fork. Nathan came up from the Atlanta area and spent the day casting to tailwater trout. It was just us in the drifter, with a hundred canoes and splashing paddles. Today it was combat fishing at it's finest. Stopping to fish a shoal only to have boats come within inches of a good drift. People diving into the water to shake off the heat. The fish in the river also came out to play. The low water was the ticket for us today. Well, the water and finding a place in the line of watercraft were tickets for us today. 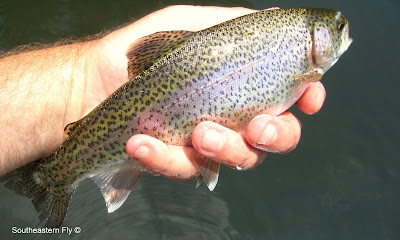 One of the First Fish of the Day
We started the day early with dry flies and droppers. Nathan hooked up first and was also the first to catch a fish on the dry and David followed. David brought a new stick that was perfect for casting a small dry/dropper rig and I got a chance to test my reflexes. David rigged up my Hydros and introduced me (by mistake) the world of casting a 12 foot leader. So, I made him cast it a while just for punishment... 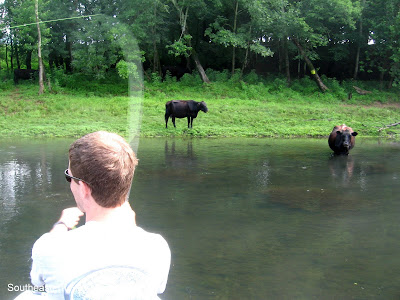 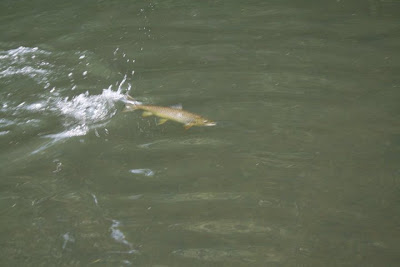 One of the Fighting Browns

Another Hatchery Brat
We spent the morning trying some different dry/dropper combos. I tried some midges that have been on my mind as of late and most worked on the hatchery brats. Some of the new creations worked well and I will be working more on some of the patterns as the week goes along. 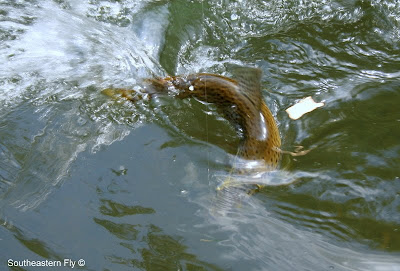 A Fighting Brown
After lunch we put David in the front of the boat, me behind the oars and Nathan in the back to keep an eye on us. We had the usual life jacket and fishing license conversation with our friends from the TWRA. Then we put my usual single nymph rig in David's hands and started picking spots that looked likely. First we landed a decent rainbow and then the browns came out to play. David hooked a nice brown and that's when Nathan and I went to work. First we began the heckling... "adjust the drag", "Side Pressure!", "that brown is going to kick your tail", and my personal favorite "don't let it get away, I'll get the net and Nathan get the camera". David played the brown into the net just as another couple boats came into the picture. It was a very slow day for most, but ours was just picking up. 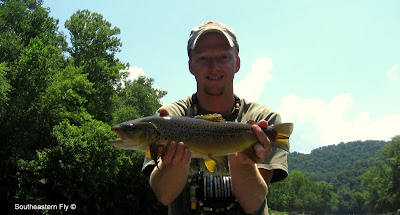 David with a Solid Brown 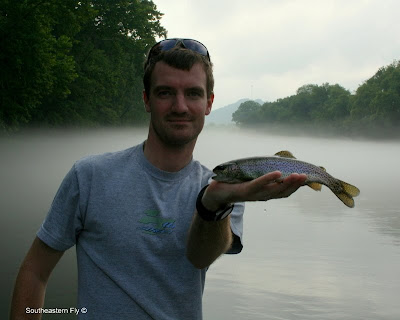 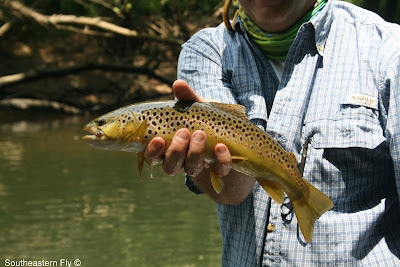 Another Product of the Single Nymph Rig
David's brown earned him the opportunity to sit behind the oars and row us a while. Some of the other anglers on the river slowed and let us go ahead and we found a nice place in among the canoes and other watercraft. It was my turn with the nymph stick and when we found some open water Nathan and I boated a few fish. Included in those fish was a nice brown that came when I was turned around having a conversation with a guy, about drift boats. It was a good thing David was watching my indicator, while as usual, I wasn't paying attention to my own rig... 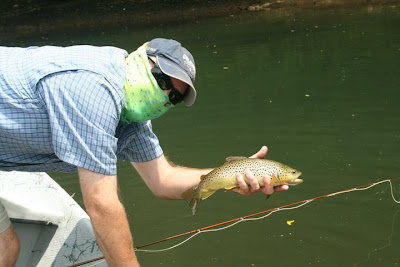 "I didn't get a good look at him officer, he was wearing a mask and kept asking about my big brother."*
After my second brown it was Nathan's turn on the nymph stick. We put him in the front of the boat and with very little coaching he began working on the perfect drift. Soon it was Nathan's turn to pick up his brown and the fish did not disappoint. Nathan came through with a well played fight and with a little heckling he brought the brown to the net. 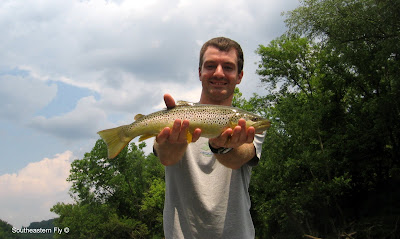 Nathan With His Nice Brown
The dry dropper worked early in the morning. Color was more critical than style of dropper. Casting to feeding fish was a lot of fun. The highlight of the morning was watching a huge 24"+ brown kill a shad. The fish was so big I discounted it as a beaver for the first minute or so. It was only after we caught a glimpse of some yellow that we backed the drifter up and watched the show. Yes, we will be fishing that area hard from now forward.
Nathan and David were a pleasure to fish with today. We caught a lot of hatchery brats early, caught some nice browns, then finished up the day with more hatchery brats. Low water was the key to locating the fish and the key to concentrating the fish into the smaller pockets and pools. For now I am back on the tying bench to work on some new patterns and to stock up on nymphs for the "hot stick".
*Caption With permission from Mark Smith
Posted by ____________________________ at 8:24 PM