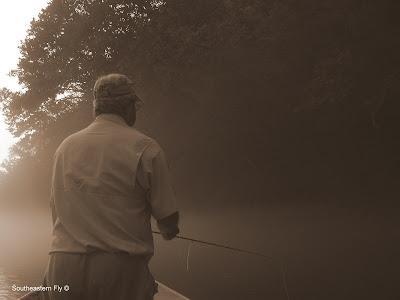 The View from the Drifter
We have been back on the Caney Fork after last week’s significant rain event. Nashville and the Cumberland Plateau both experienced flood conditions again. This time the rain was not the monumental flood that occurred in May of this year.

Every ditch and creek that flows into the Caney Fork has been cleaned from the heavy rain. There is a small gravel bar at the mouth of the creeks and some of the gravel bars have tires sitting on them. My suspicion is, the ditches have been eroding and people had been trying to stop the erosion with tires. Some tires have been dislodged and now are sitting on the gravel bars. Those tires may provide some future fish habitat. Now don’t get me wrong the river is not full of old tires, this is just an FYI that we noticed since the heavy rains. There you have it, some river trivia if you will and nothing to be alarmed about.

Along the lines of the gravel bars, there are now nice little pools downriver of the newly spilled gravel and some of those pools may hold a fish or two. This brings us to the next point, which is, there are changes in the river bottom. This is not significant news, but is worth considering when wading and adjusting those indicators. 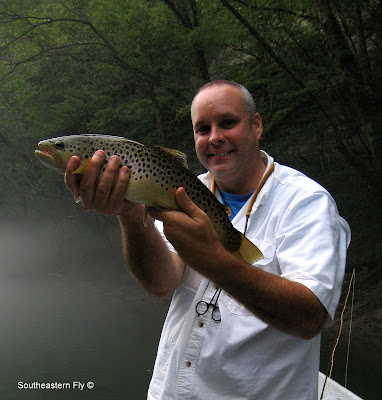 The generation over the past weeks has been good and the forecast appears to be unchanged. The water is low later in the day, but anglers should be ready for the water to fall out a little slower due to the extra sluice and the high levels of the Cumberland downstream. The water eventually falls out to low dry fly levels; it just takes a little longer than most folks like, me included!

On a recent trip Anthony and I got into some Caney Fork Hatchery Brats. We both noticed the browns and rainbows are beginning to fatten up and they are growing slightly in length as well. The browns are beginning to change their colors as they are getting ready for the fall spawn (attempt). The browns that miss their opportunity to attempt their spawn will hopefully have accelerated growth and be ahead in size by next spring. There are already some colorful six month browns (this is an estimate, we didn’t ask for their birth certificate) that appear to be already getting a little extra length.

Curiously the brook trout are not showing the same amount of growth, or presence for that matter. Some of the reasons could be that not as many have been stocked or we just haven’t gotten into them as of late. However, there is a report of a 16” brookie caught in the river within the past few weeks. Even on the +2” Caney scale that is a nice brookie. 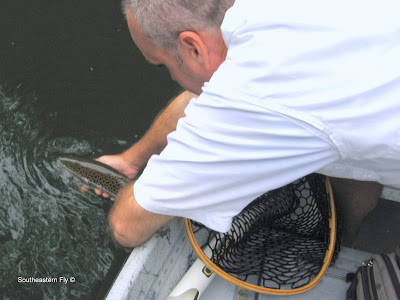 Over the past few trips we have been stopping at a nice hole to fish. There are fish in the hole, probably more fish than we know. The fish have been feeding just under the surface each time we stop and not real interested in dries. So, last week we stopped and we fished nymphs. Anthony was on the oars and gave me the opportunity to try some different things. He put the drifter in exactly the right position and dropped the anchor, just like an old pro or as he coined the phrase, just like a guide’s guide would do. We determined there are fish in the hole and then we determined there are a lot of fish in the hole. After several good drifts we brought several fish to the net and now the Guide’s Guide Hole has been born.

The canoe hatches are slowly tapering off now that school is back in session and in addition to the cooler weather that is just around the corner. The fish will sulk when a boat passes over their head, but they will come right back and start feeding again after just a few minutes of calm…..or should we say calm by the Caney Fork standards anyway. There is one caveat to this statement and it is when people make a lot of noise in the aluminum canoes. The fish come back, but it seems to take somewhat longer for the fish to recover after the apparent shock of paddles hitting aluminum. Eventually, if anglers can wait long enough, the fish can clear the “ringing in their heads” and they will resume their normal feeding activity.

There it is, the report from last week and hopefully folks can gain some knowledge from the information. The water is still cold and the fish are still feisty. If you are thinking about planning a trip, now would be an excellent time to book it. We have caught nice fish over the past few months and most on top water. Top water fishing is some of the best action on the river right now, heck all year for that matter. The fish are looking up and the browns are beginning to eat in preparation for the fall spawn. If we do not have another significant event the river should be real good in the coming weeks. Hope to see you on the water. 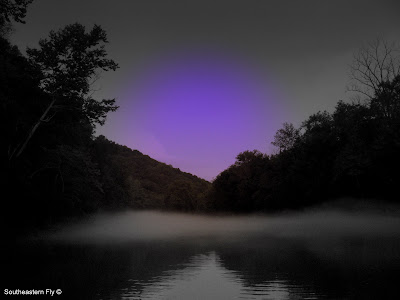