Quickly Becoming My Favorite Hatchery Brat Shot
Although the temperatures were in the upper 90's, it was a good day for Dave, from Banner Elk and his son Stephen, from Asheville to come and fish the Caney Fork River. The water was still cool, but unlike the previous trip with Curtis and Ellen, the water was much more clear and the afternoon storm came much later in the day. Curtis came along to try out a NuCanoe and spent the afternoon batting clean-up, which on this day was also a good place to be. Curtis was able to catch a couple real nice browns. One of those browns was a fish that Stephen had on the line for a moment and then lost.....at least that's our story anyway. 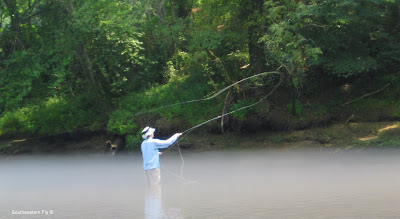 A Stop for a Cool Dip and Some Quick Casting to the Bank
We started the day with some casting lessons and then moved onto the proper mending and hookset. We fished nymphs early and the nymphs produced the usual hatchery brats in the upper part of the river. Folks on the river were very nice throughout the float, but the sun was unrelenting. With the high temps the fish were looking up, so we put the guys on top water and offered some high protein flies to the bigger Caney Fork trout. 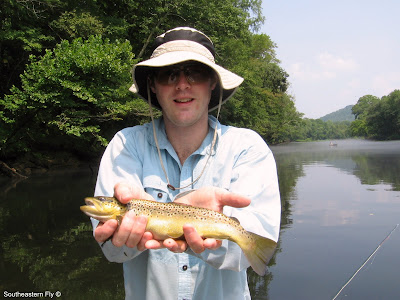 Reward Him
We saw a fish feeding in a difficult spot. Stephen took the long rod and laid the perfect cast into the feeding lane. After some quick encouragement the brown came to the top and took the fly. Casting to feeding fish has been good this summer and with the right fly, the right cast and the right fish it looks a lot easier than it really is... 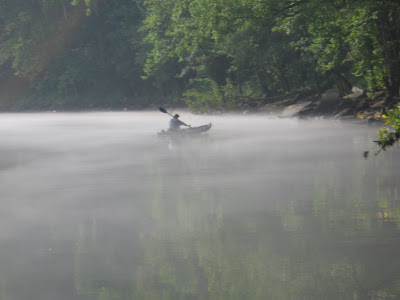 Curtis Going Back for Another Try 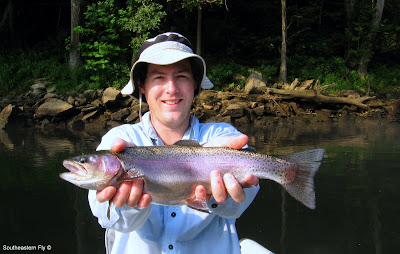 The Coolest Take of the Year
As we were floating down the river and engaged in good conversation we floated into one of my favorite holes. Most anglers overlook it, well some anglers overlook the hole. We fish it pretty hard most days. On this day we chose to fish the hole before moving to the next shoal. Stephen cast out toward the bank and as the fly settled down onto the surface of the water, a huge explosion erupted. He set the hook, but missed the fish. The fly was sailing back toward the boat when Stephen decelerated the rod and the fly landed about three rod lengths from the boat. The rainbow most have felt the fly hit the surface and came over to inspect. The first pass looked to be uneventful and we decided to leave the fly floating in the zone of the fish. The fish started downstream, but changed it's mind and rose to the surface. Then the bow took the fly, Stephen set the hook and the fight was on. The entire take was in slow motion. The fight however wasn't in slow motion. After a few minutes we got the fish to the net and after a quick photo we put the fish in the net for some rehab. Then Stephen did the honors of the release and we relived the take and the battle several times.

The Most Stealthy Angler on the River 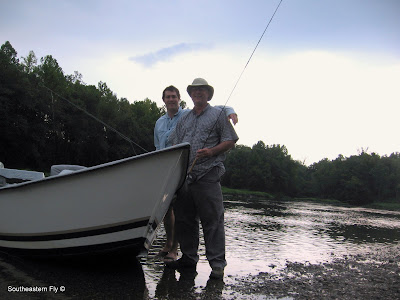 Dave and Stephen at the End of the Day
Father and son trips are a lot of fun. Spending a few hours in a boat helps to slow life's pace and gives people time to catch up. The fishing is a good way to occupy the mind between conversations and fish brought to the net are a momentary celebration for the anglers.
Overall this was a very nice day. The heat was extreme at times, but the guys stayed hydrated with the Gatoraide and water. We left some fish for Curtis and he did not let many get through. When the afternoon storm rolled in we headed for the take-out and loaded the drifter. It was a good day and I was glad to have the opportunity to guide such enjoyable company. 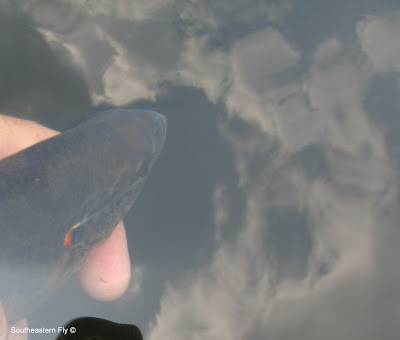