Deweese, Charlie and I met-up at Happy Hollow and made our way to launch the drifter at Center Hill Dam. Deweese has been on float trips before and Charlie had fished with the fly rod several years back. We backed the drifter out into the current and dropped the anchor. After some refreshers in casting, mending and hookset, as well as a quick rainbow, I pulled up the anchor and we started the 1/2 day trip on the Caney. 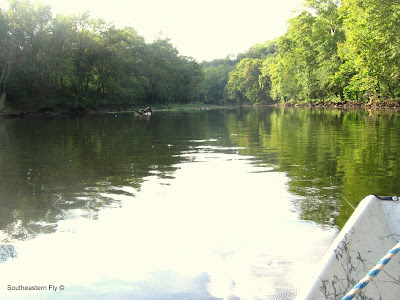 We Found an Empty River Late in the Day
Traffic was medium early in the trip. The canoe companies turned loose several canoes and everyone was in a good mood as we floated on clear falling water. We were fishing nymphs early, but the winds picked up and made nymphing pretty tough for everyone. The wind was blowing upstream, which made a good drift next to impossible. Also, the ripples on the water made the nymph dance up and down under the indicator. We had a few hits early on nymphs, but with the nymphs dancing the fish seemed to be turned off for the most part. 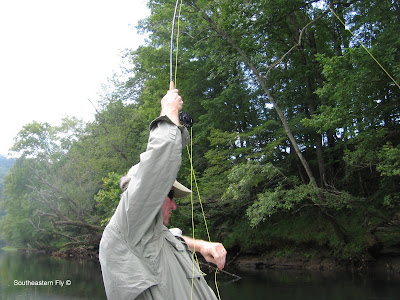 Deweese Hooked Up with a Nice Brown
After the nymphs did not produce to my liking we went to the top. Deweese hooked up pretty quick with a real nice brown. The fish made several attempts to release itself and then made a run. With a headshake and a flip of the tail, the brown freed itself. This left us all with a groan and Deweese a lingering memory to overcome. 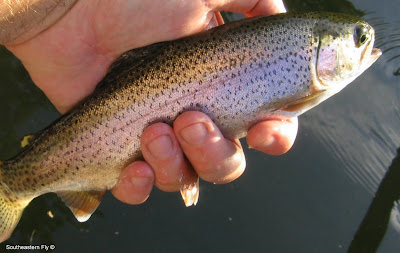 Charlie Got into Some Action as Well
The top water high protein offerings continued to produce strikes, but we were having trouble with the hook-ups. We worked on the hookset and then the wind died down. We went back to nymphs and Charlie got on a rainbow pretty quick. We continued the float with the nymph rigs, fished in all the likely places. The fish gave some action to finish out the float and the guys continued to brush up on their skills as we floated into Happy Hollow. 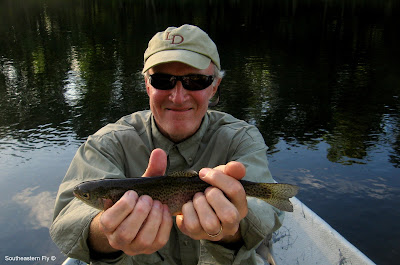 Deweese with one of His Rainbows
Charlie and Deweese continually got better over the course of the float. The fishing was off early, which I believe was mostly due to the wind, but after it died down the guys got on their game and hooked up. The traffic was down somewhat and with the holiday weekend over, the canoe and kayak traffic should die down even more in the coming weeks.
Check back later this week for another report from the Caney Fork River.