Fishing Report, Along with Just Some Ideas and Such

Some days, I do wade. Most of the time I just sneak off and don't let anyone know, except my family. The fall fishing season is just around the corner and some say it started on Monday. This week I spent a little time on the river trying new things as well as brushing up on old skills for tailwaters. 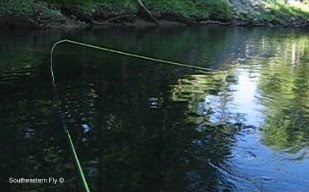 A Rainbow Puts a Bend in the Hydros

The rainbows came for a greeting within minutes of getting in the water. The release from Center Hill Dam was over and falling water was the flavor of the moment. There were a few fish to be caught on the regular nymphs and then when the water fell out, a little more, I began to experiment with some dry flies on a shoal. Dries didn't work as well as I hoped, but there was a little action. Then I began to try some random flies that produced more action, but no big fish came to hand. 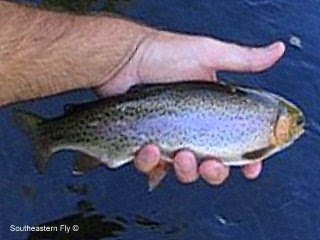 A Chunky Rainbow on Nymph Pattern

This trip not only reminded me of how I started fishing tailwaters a few years back, it also reminded me of some techniques I have put in the back of my mind. For instance- soft hackles. Swinging soft hackles is a good way to pick up fish. For me, the soft hackles work best in swifter moving water. Perhaps over the shoals or swinging them off the end of the shoals into the pools.

Last year we did some fishing with soft hackles on a few occasions. It was the usual one soft hackle and most times a Bust-a-Brown. Then I did a little on-line research about Davy Wotton and multiple fly rigs, specifically multiple soft hackles. This technique requires a dry fly closest to the rod, an anchor fly in the middle and a unweighted soft hackle (or two) as the tailing flies. This technique takes some smooth casting skills, but can be rewarding.

As the day wound down and the canoe traffic began to fade, the bigger fish came out and started showing themselves. There were a couple of close calls, but I couldn't get them to play and finished up the evening on a healthy hatchery brat brown trout.

The midge hatch was coming on strong just before dark and there were a few other varieties of bugs as well. Next time I will be working those shoals with a soft hackle, or two or five...