Steve and I went up to the Obey to check out the action. It has been a few months since I was up that way and this was Steve's first time on the river. On the way we discussed a bunch of topics. As we drove along the Cumberland River I commented on how the Cumberland can be the color of chocolate milk, while the Obey will run clear. It appears I should have Considered the storm that rolled through Celina and then onto East Tennessee the night before. The Obey was as stained as I have ever seen it stained. But, we were there and the drifter was sitting in the river waiting to get out and chase some fish. So, we did what we were supposed to do and.....we fished! 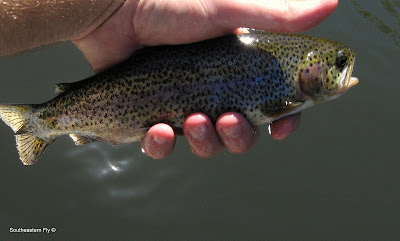 Always Take a Picture of That "First Fish"
We started with top water in spite of seeing very few rises. We tried some streamers, including the new Monster Shark Prototype streamer fly. We were getting our hat handed to us early as the generation caught us quickly. We continued on downstream trying a variety of flies. 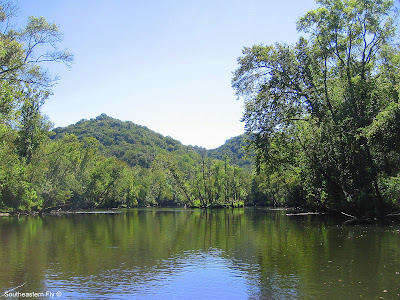 We drifted along spotting a few fish and some local bank fishermen (that's another story for another time). Then when the generation smoothed out, or the high pressure leveled off, or the trout got hungry, or the flies looked like they might taste good, who really knows- but the trout began to open their mouths and we picked up some fish on nymphs. We had the indicators set about six to eight feet above the fly and the fish seemed to like that pretty well. 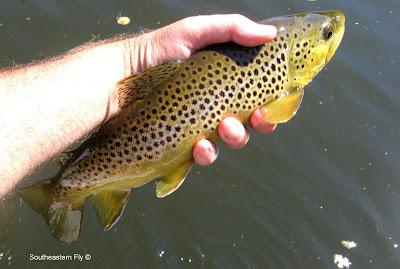 The Obey is a river with plenty of cover including downed trees along the entire float. We eventually started banging the banks and as we moved down river toward the takeout, we were rewarded with a nice brown trout. Fishing nymphs in the stick-ups and downed timber can be rewarding, but it can frustrating too. We hooked up on enough trees to clear out a couple rows in the fly box before the day was over. That will put me on the vise for some upcoming trips.
I just came in from a float on the Caney this afternoon. The day was a nice day and the fish were cooperative. Look for that report later in the week. Until then here is a picture of the ramp at Betty's Island, which is supposed to be poured in the next day or two. 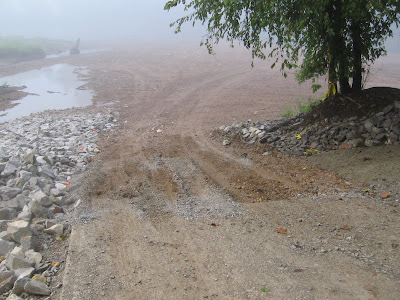