Fishing Report for the Caney Fork 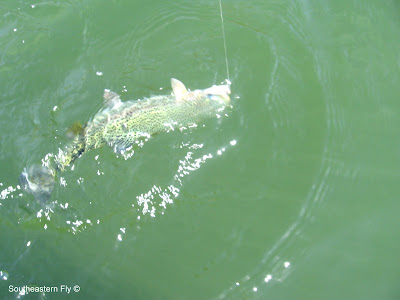 The First Fish of the Day
Mark and I floated the Caney over the weekend and found an extension of the past couple floats. The water still has a deep green color and it is slightly cloudy as well. The traffic on the river was less than expected, however some of the shoals seem to hold more anglers than fish. The water level in the lake is holding in the 625' range and I would suspect the water level in the lake could be lending to the cloudy water. 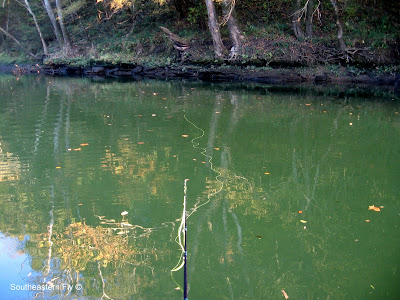 Leaves on the Top and Leaves are Under the Water Too
There are a lot of leaves in the river right now. This happens about this time every year and slows the fishing. It appears most of the fish have stopped looking up, so catching on the dry flies and hoppers has slowed. A few hours after generation is the best time to throw the top water offerings, but riding along in the drifter, with a nymph, is the easiest and at the moment the most productive for us.

The Water is Still Somewhat Clear
The fish are still eating, but the browns have slowed for their yearly ritual. They have now moved onto the shoals, but they seem to be a little more difficult to figure out. They are much more interested in themselves than they are eating. Yes, it is that time of year and when it is over, well streamers could be the ticket as the browns begin to search out high protein to get ready for winter. 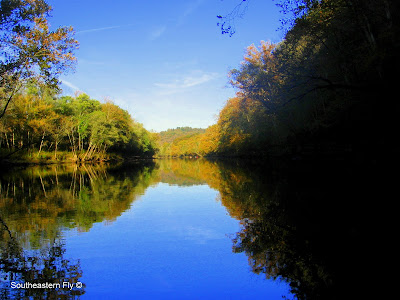 It is Hard to Beat the Scenery 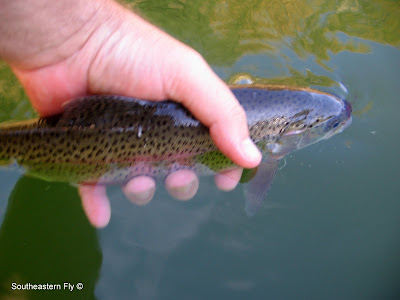 All "Colored-Up"
So, the rainbows kept us somewhat busy throughout the day. The river was not"on fire", but it was consistent. We saw some large browns and large rainbows, which kept things busy. The fish are in the usual places and eating the usual nymphs at the usual times. Falling water is productive and makes for a nice float. Don't be afraid to try something different, especially if you find a pod of rising fish. Check back later this week for another update on the river conditions.