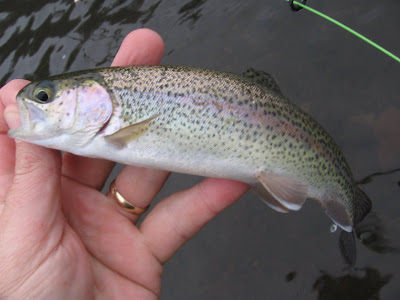 The Usual Elk River Rainbows
I slipped off to the Elk River this afternoon. It has been a long time since, I have found the time to get down to the river where I have been lucky to spend so much time. Over the past year though it has been tough, between trips and personal fishing, to get away from the Caney Fork. So, in spite of the rains last night and the drizzle of the morning, I was off.

The water was stained, which is expected after a rain. The wind was up and the fish were rising, but the most surprising thing was the number of cars in the parking lot. The stained water presented an obstacle. The Fall weather also presents a change in the trout diet. To combat these conditions I thought the best fly would be an attractor nymph. There just so happened to be a Tutto on the Orvis rod that I took with me.

For those who are wondering what the heck a Tutto is? Let me do my best to explain. It is a flashy nymph, with a big bead head, PT body, flashy tail and flash back. Tutto means everything in Italian and this fly imitates most attractor nymphs on the market, combined. Why take the time to change attractors? There wasn't a good reason (and I can be lazy when I am fishing on my own) so I started there. The third cast picked up a Elk River Rainbow and the afternoon began. 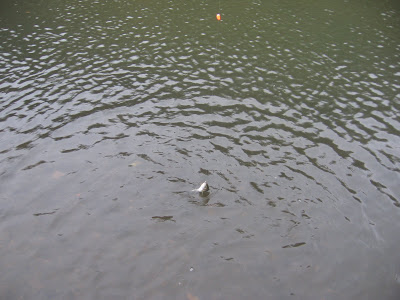 Slightly Stained Water
The fly box that went along on this trip was full of nymphs, some dries and a ton of midges. David Knapp is one of the best midge anglers I know. He took the time one evening to show the guys at Calvary Outfitters a midge made of vinyl tubing. I rumbled through the box and put one of these little jewels on the 6x tippet. Then on the first cast it picked up another rainbow after a dry spell. The fish were selective and the fishing was technical. Fishing to feeding fish can be maddening and rewarding, depending on the drift. 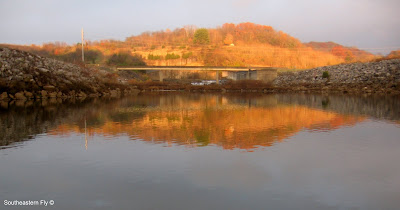 A Break in the Clouds Brought SUNLIGHT!

As afternoon turned to evening, the rises slowed and eventually only the most selective fish seemed to be feeding. As I watched the fish it was clear the fish were actually eating just below the surface. As with most folks I like to say they were rising, but really for the most part they apeared to be eating emergers. Every once in a while a fish would chase an adult midge, that appeared to be about a size #20.
Other anglers were reporting technical fishing. The fly box was in and out of the jacket often enough that I eventually got into some flies that are usually overlooked. The fly of the day was a dead-drifted Tutto, but the partridge & orange and a stripped pheasant tail (w/o a bead) also fished well.
If you are going down to the Elk, I would suggest giving the water a day or so to clear. Take plenty of flies in order to give the fish a different look every now and then. Don't overlook a stripped soft hackle and as usual take some nymphs to hit those holes the upper part of the river is known for.