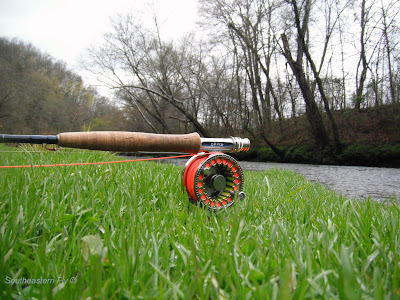 Balancing a Fly Reel on a Blade of Grass...
Here is the Middle Tennessee water report, that's right it's a water report for most of the week. There was a lot of water on the Caney Fork (thank you Capt Obvious). The US Army Corps is still releasing water from Center Hill Dam and after a weekend of rain we will see what Great Falls turns loose in the coming days. At the last look Great Falls is again on the rise. But there is hope for a slight slowdown in release for the upcoming week at Center Hill depending on the predicted rains. We will see how the weather guessers play into our recreational fun. *** Then there is the Obey River below Dale Hollow Dam . Same old story, same old song and dance...my friend (thank you Aerosmith). Dale Hollow Lake, with its abundance of crystal clear goodness, is still high. The Army Corps is cutting back the constant generation at the dam and now thy are releasing between 1575 CFS and 3165 CFS (give or take a gallon here and there. This river is a good place to go when the water levels are running high and the Army Corps has this release running on one or less generator. Take nymphs here on one generator, late in the float, even though every cell in your body is screaming streamers, this time of year. 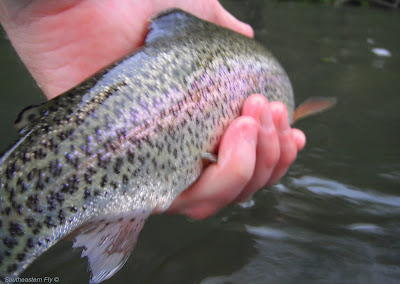 Fuel for the Tail
This week the Elk was the river of choice. After a week of generation, or at least until Thursday, TVA dialed back the generation and we were out there. If you are going to catch fish you have be out there trying, right? Remember- Make 2011 the Year of Getting Out There (We'll talk about how that phrase was developed in a later report). So, the rain made a strong comeback over the weekend. The creeks and ditches that run through the farmlands, on the way to the river, were flowing strong and muddy. The Elk River gets stained/muddy quick and as we have reported here several times the river does not fish as well when it is stained or worse. 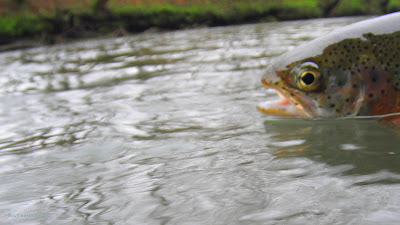 What Are Ya'll Lookin At? 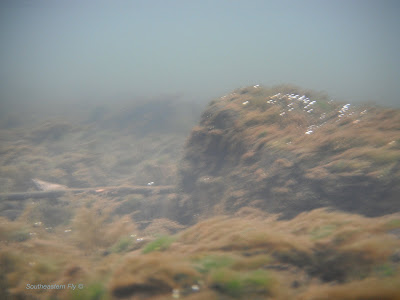 Not as Clear as Last Week

So what's up with the underwater shots? If you have been reading this report since the first of the year, there have been several underwater photos-and not just of fish either. The reason is it is intriguing what goes on where a fish lives. There is a lot going on down there and a lot of stuff on the bottom. The Elk can run pretty clear while the bottom can get all gunked-up. There is food in the gunk and under the gunk (by the way gunk is now a fly fishing term). The first thing to remember is- if you get a snag on the bottom to go ahead and clean the fly. The slightest piece of gunk on an excellent pattern will turn a fish off quicker than a poor pattern with no gunk. Check the fly early and often.
***
Imagine your favorite pattern floating or being stripped just above the bottom in the picture above. The fly is doing what you have trained it to do since the day it came off the vise (I just threw that in there) anyway it is just off the bottom when it bumps the rock. The chances are the fly is going to pick up some gunk and from that point on, until you clean it or the gunk just wears off, there is an exponential reduction in chances a trout will take a second look. So, back to the original question of what's up with the underwater shots? These shots hopefully help some of you think differently and in some shots actually give you different ideas about what goes on down there.

How was the fishing? This week in spite of the water and weather the Elk was just about normal for the conditions. The photo above shows the stained water and expect the same over the next week or so. Don't fear because there is a slow down in the rain coming after this week and hopefully there will be a little more generation to clean out the creek run off. If you make a trip to the river show the fish something flashy and get the fly right in their face, because the water clarity makes their visibility difficult at best.

***
Anglers are getting trips on the books. Some have decided to book through the Will Call Program and some have already set their date on the river. Effective Nymph Angling Instruction is a chance to learn some of the best techniques for tailwater trout. If you are new to fly fishing or just want a different perspective this is a good way to spend an afternoon on the river. 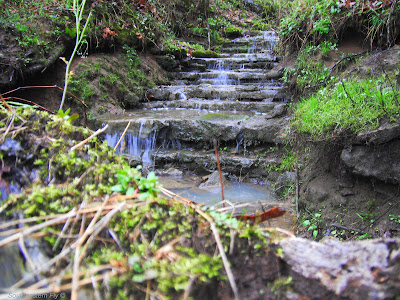