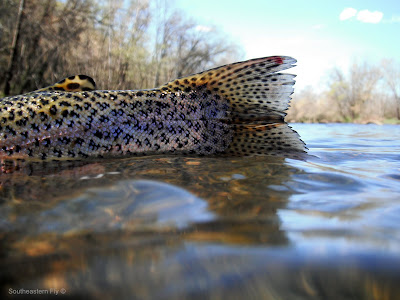 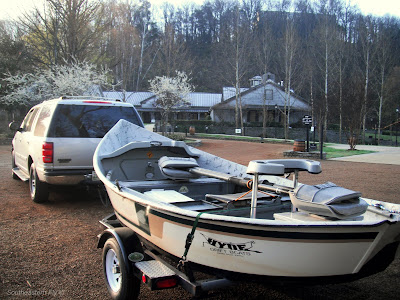 Waiting for Patrick & Mark at the Jack Daniels Distillery
This week has been another week of big water releases. The Obey River was flowing at two generators and sometimes one generator. Still the water, for the most part, has been too swift for wading and probably not the best for floating. But a few checks with the future generation reveals some lower water windows coming.
***
Center Hill Dam releases have been relentless. We've had a few days of rain the past week and Army Corps has been running 'big water' 24/7. The future schedule shows even more water for several days this week. So, we will be running trips on the Elk, at least for a week or so. 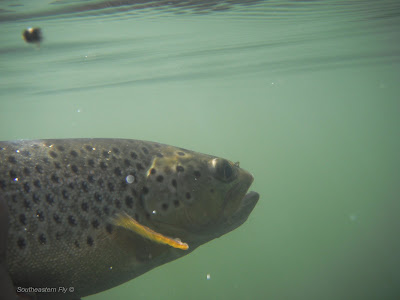 The Elk Gives Up a Brown or Two Each Trip 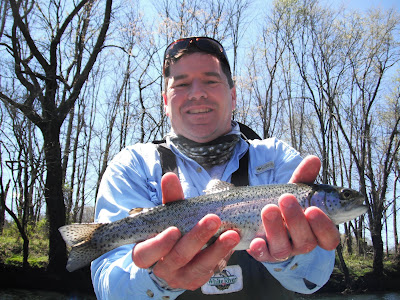 Mark Strikes First...Actually the Fish Struck, Then Mark..
The Elk has been fishing well for us over the past month. The fish coming to the boat appear to be very healthy. Nymphs have been the fly of choice and when the fish take the fly they flight like a fish twice their size. Some anglers have been complaining about the catching. There are some sections of the river that fish better than others, but overall the fishing and catching have been above average. 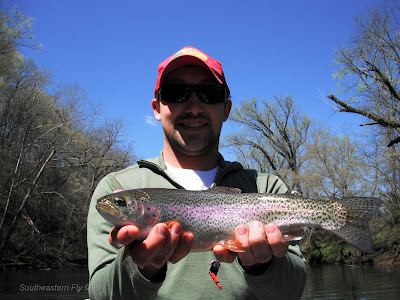 Patrick With His First Rainbow

I met Patrick and Mark at the distillery and then we headed to the river. Mark has been on the boat a few times, but this would be Patrick's first time. I wasn't sure if Patrick had ever fished the fly rod, but on his first cast I knew it would be a good day. He picked up the Hydros and lobed a nice cast downstream of the boat. The only problem with the cast was I expected these cast for 9 more miles of river. He was a trooper and did a great job the entire float. 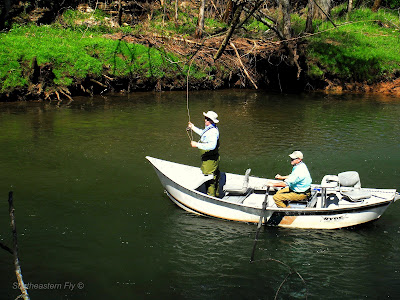 Mark and I Making a Pass Through a Fishy Section of the River
This day on the Elk was another good day. The guys brought nice fish to the boat and other than the wind it was a relaxing float. They also learned the finer points of a good mend and when to wait for the wind to die down before executing a cast. The run-off from the tributaries was not as stained as expected but it will take a few more days of non-rain to clear the river back to a premium. 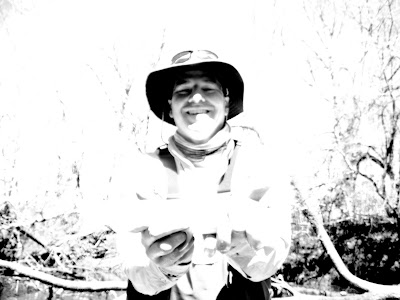 If you want to get out and learn more about nymphing just give us a call. We also have the ability to book three drifters for larger groups. Give me a call for pricing. If you are going down to the Elk make sure to bring your stealth. The fish are line shy, but don't seem to be put off by a little heavier leader and tippet. Working with depth is critical right now and the fish aren't making big moves to get their food. The fish are thereand it is up to everyone else to Make 2011 the Year of Getting Out There. 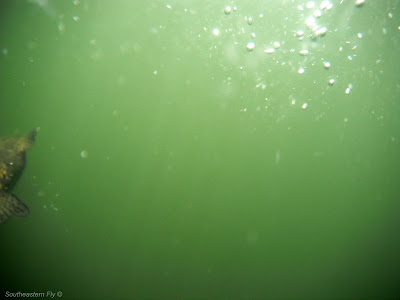