Racing the Weather on the Elk River 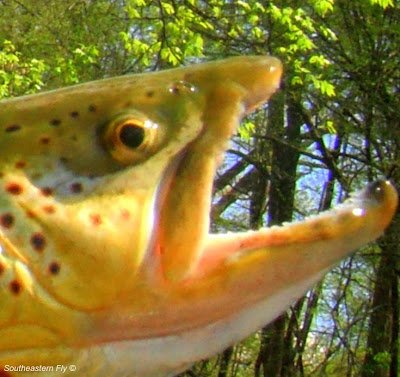 Glenn needed some time off from his restaurant in Brooklyn and came back for a float on the Elk. A couple years ago Glenn floated the Caney Fork with us and when he left we decided we would float the Elk next time. This was next time and we shoved off from below the Highway 50 bridge on 2000 + CFS. 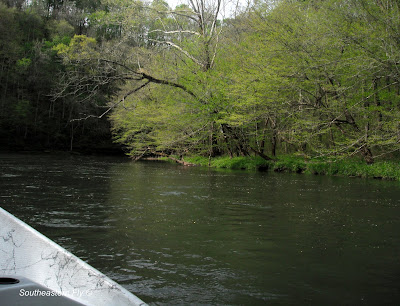 The Bend Pool on High Water

Glenn brought along a 6 wt St Croix Bank Robber, loaded with Streamer Express line. What better way to spend the day than chunking big marabou and ducking flying hooks? The early part of the float was uneventful with no looks, bumps or hook ups throughout the first section of the river. We stopped and the spotlight was on the guide. So, I took a play from my Obey River High Water Playbook and we went to nymphs to pick up some fish. ***\
We fished the banks and concentrated on fishing the slowest seams against the banks. Within the first 20' of nymphing the new rig produced a rainbow, which was a good start to the remainder of the day. The Elk on this generation is a lot like the Obey on one generator. Everything inside you says throw the big nasty Monsters of Marabou, but the fish respond more on the nymphs- fished in the slow seams. ***
I will also say this- the Elk, on this flow, is no place to be unless you have the right boat and are experienced on faster moving water. Staying closed to the banks takes concentration and boat control. I wouldn't do this float in just any boat and certainly it would not be recommended in a boat that is easily tipped over. 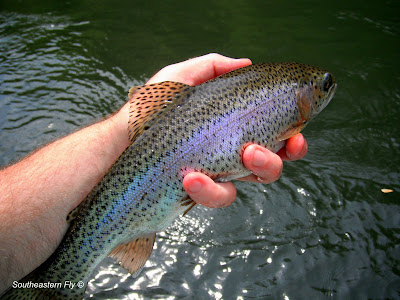 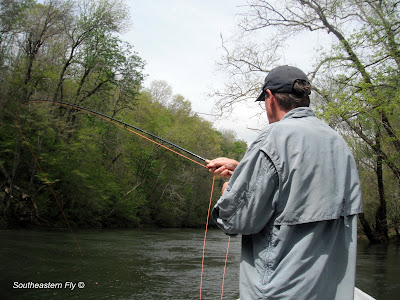 Glenn Hooked Up on the Hydros Deep-water Nymph Rig
We continued on fishing nymphs. Glenn was quick on the draw and was clearly comfortable with the nymph rig. We stopped a couple times to re-rig as we worked the inside of the bends and the dead falls along the way. Later in the day we were ready to enter the fastest section of the river. This section has a significant amount of downed trees, the width of the river is much more narrow and can be generally scary as crap. ***
We went back to the Bank Robber with a size #2 Bush Pilot. I explained this is where we want to chunk streamers to the bank. You get three strips after a cast, then it is time to re-group and throw again. The object is to get as many bank shots as possible, while the oarsman tries to dodge the dead falls and rocks, and tries to keep the boat at the slowest speed possible. Also, there are only a few good places to stop if needed and if the angler catches a fish they are on their own until the boat can get into position to net the fish. ***
Glenn had the streamer rod in hand, the oars were my job and we entered the tunnel. The fastest part of the tunnel is the entry. There are a couple nice stumps just inside the entry point that keep the game interesting. Just about the time the stumps came into the picture, Glenn hooked up with the biggest fish of the day. We slowed down even more as he fought the brown in the fastest water. The brown finally began to tire and we were ready to net the fish. The fish made another run when I reached for the net and the boat went for the stump. Several strokes later we were past the stump and ready for the net again. I picked the landing point, we netted the fish, rowed the boat into some slack water and dumped the anchor on the bank. 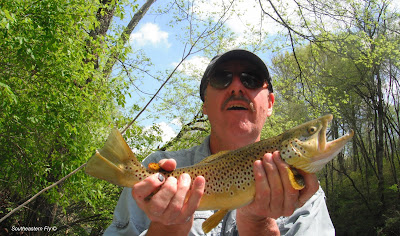 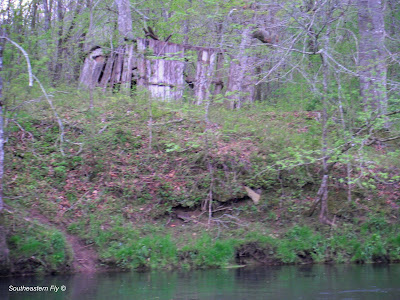 One of the Few Structures Along the Trip 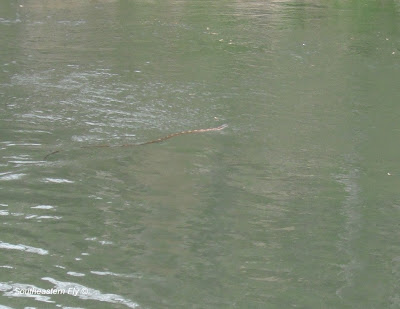 Mr. No-shoulders Made His Appearance
The day started off cloudy and windy. As the afternoon went along the clouds were building and the winds increased as well. At the end of the float we were in a big blow and rowing was getting more and more difficult. The wind was blowing "crazy hard" and we were beginning to race the storm. Glenn and I knew we were going to be trying to beat the weather when the day started and that was where we were. The ramp was a welcome sight when we cruised into the takeout. The weather was starting to get interesting. But, after what turned out to be a mostly sunny day we were lucky to get the boat on the ramp before the weather got "bad".***
The day was a good one. The fishing was on the tough side but the fish were rewarding. Glenn, who is an excellent angler, adapted well to the changing conditions and as he proved on our previous trip, he can get the best of the fish. We have another trip set for later in the Summer as we make 2011 The Year if Getting Out There... 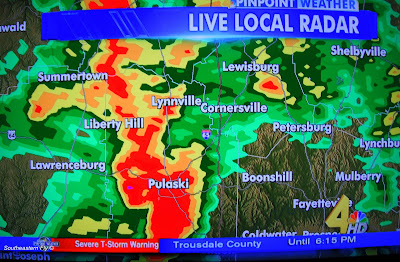