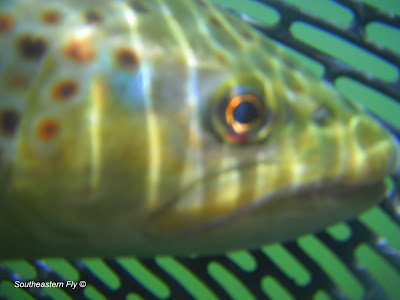 Looking Back at You
Howard came back for a second try. We did the same float as last time and focused on sight fishing with dries. We used everything from terrestrials, to Adams and even some nymphs pretty early. Nymphs were not working too well, which at the end of the day did not hurt our feelings. So, when we came to some water that gave us some action last time, we had Howard's fly rod ready with a big ole dry. We discovered another great pool that held several nice fish and two really big browns. Howard fished the pool with everything we could think of but the beast wouldn't rise to the fly. We slipped down the river and missed a few, caught several and before we knew it we were in a steady rhythm of, spot a fish- fish to the fish. We even caught some we were fishing too, just for the picture, so someone would know we were there. 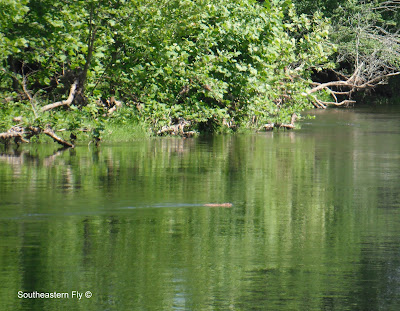 These Guys Are Moving all along the River 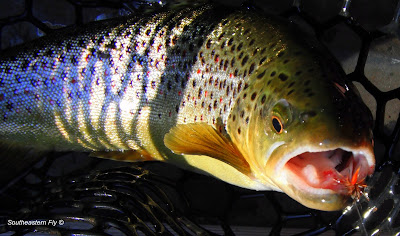 Howard Took This 14" Brown on a Hi-Vis Adams

Howard is fun to fish with and loves to throw a dry fly. We would drift down the river, I would try to spot the fish and then he comes in and catches them. It was a pretty deadly combo when everything is clicking just right. This type of fishing makes being on the rowers bench a real nice way to spend the day. 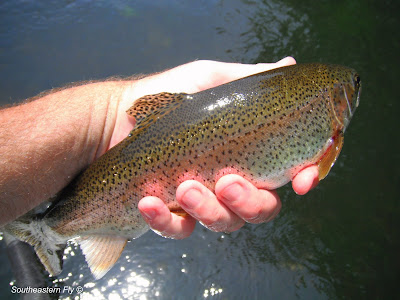 One of Two Rainbows for the Day

Just before lunch the action slowed so we focused on the best looking spots. Howard tossed a big dry next to a tree and right in a blowdown. The fly disappeared in a big splash. Then the fish went to the downed tree limbs, but Howard got the head of the fish pointed in the right direction. Somehow he got the fish into open water and after several big runs and even a couple jumps the fish came to the net. This brown was only slightly smaller than the brown from our last trip, but still a very healthy fish. 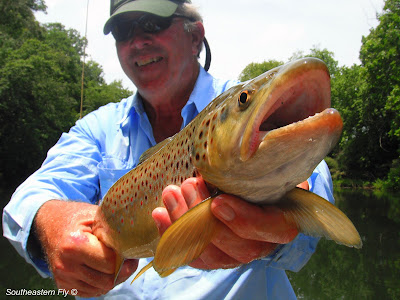 Another Nice Brown for Howard 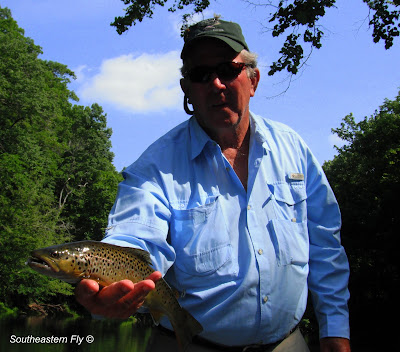 One of the First Fish of the Morning on a Dry
Overall the day was good, we had the nice brown and several other nice fish on the dry. We missed some fish here and there, and there were also some fish we wish we had another shot at catching. But, it is hard to catch them all. Some of my most memorable moments were the fish we did not catch.; the fish that rose to the fly and didn't take and the fish that turned and bolted just before the take. Of course watching the fight out of the blowdown is a big memory of the day, that is hard to discount. Fishing with dries doesn't bring as many fish to the net, but it is very exciting. So if you haven't already make 2011 the Year of Getting Out There... 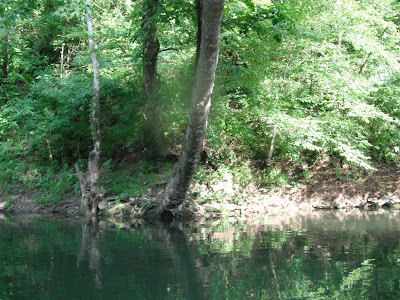