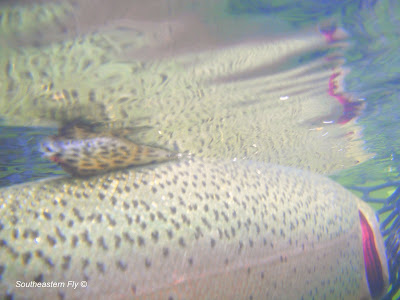 We have been on three rivers over the past several days and we aren't complaining that's for sure. The Caney Fork River continues to produce good fish for us. The US Army Corps is starting to crank up the release for a few days, possibly due to all the rain Center Hill, Great Falls and the plateau have received. While the Elk is still fishing well with the larger fish responding, the smaller (11-14") fish have slowed on hitting the nymphs. I must say we have gotten used to those fish to keep us entertained between the bigger fish, but still the Elk River is worth a trip if you want to get out to chase good browns and healthy rainbows. We haven't been on the Obey as much as I like to get up there. But we did get up to that short little tailwater as well. The hatchery brats are out in force and the slam is not too difficult to achieve but anglers have to be on their game to get the best results . The fish are plentiful although sizable fish are tough because of all the small fish that rush the fly when it hits the water. 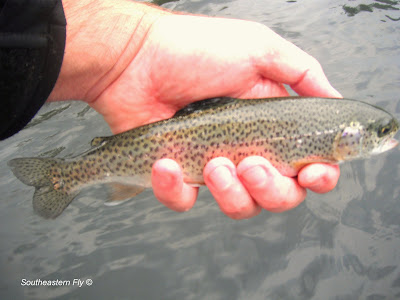 Dave's First Fish on the Fly Rod
Brent and I fish together pretty often. He wanted someone to teach his brother-in-law Dave how to fly fish, so Brent booked a trip on the Caney Fork and that's where I come into the picture. We met up and drove to the river. While I was running the shuttle Brent took the opportunity to land a real nice brown trout. The day was shaping up to be a good one, although the weather looked ominous at best. Later in the day the Weather Channel girl's prediction of bad storms would come true in a very real way.
===
We backed the drifter out next to the flow and dropped the anchor. Dave picked up on casting very quickly and a few casts into the lesson he picked up a rainbow on a dead-drifted nymph. We were still basically at the launch and both anglers had produced fish. Not a bad start to the day. Brent Went Back to the Well and Picked up this Rainbow
We drowned some nymphs early in the float. The nymphs just were not the ticket we wanted to get punched and after trying different depths and patterns we abandoned the nymph rig, then went in search of feeding fish.
***
Brent was keyed into feeding fish and tossed his rig next to an old blowdown. A fish rose to the fly and Brent missed (I mean the fish missed) and Brent went back to the same spot with another great cast. The fish rose, slapped the fly and then felt the hook. The fight was good and the fish came to the net with some noisy splashing. We took the hero shot and Brent was on the board with a nice brown and a nice rainbow. 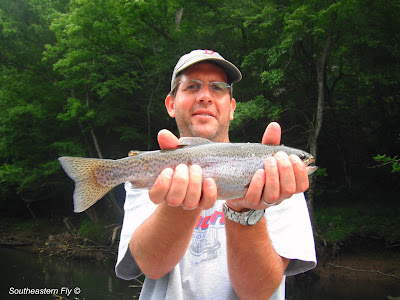 Dave's First Trout on a Dry
Brent was a gracious host. He fished from the rear casting brace and gave the best water to Dave. Dave was getting the hang of casting. When his cast would go away for a bit, Brent and I would reassure him he was doing all the things everyone does when the first pick up a fly rod. Dave worked on his cast and when we arrived a good spot, I pointed to a nice hole. Dave stuck the bug within inches of where I said and a good rainbow responded....just like the book says (more on that in a future report). The best results were just around the corner....literally. 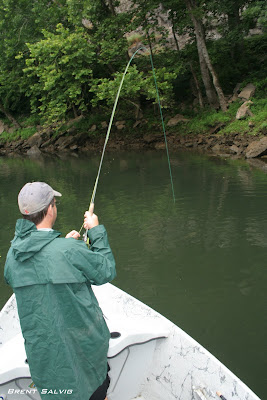 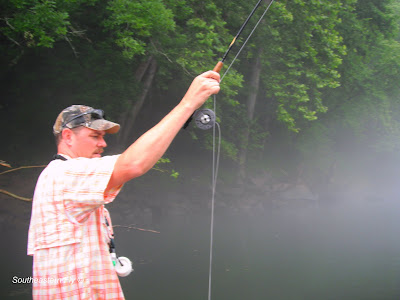 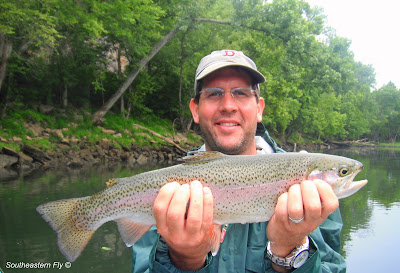 Dave's Catch of the Day
Dave continued to work on his casting, while Brent continued to offer the best water to Dave who was in the front of the boat. Sometimes the best plans are hit and miss, at best. But, sometimes the best plans come together. We found a large feeding fish and slipped the boat into position. The fish was feeding and working hard at fattening up before the storm arrived. Dave put the bug in just the right spot. The fly settled into a drift and a short while later the fish exploded on the fly and fight was on.
***
Dave was midway through the fight when we realized he had been hand-lining the other fish to the boat. This rainbow was going through it's bag of tricks when we began the lesson of "oh yeah, here's how one of these fly reels work". Dave picked up the lesson quickly and purely out of necessity. The fish came to the boat kicking and screaming. Minutes passed and then Dave was the proud holder of the large fish of the day world record (i.e. he caught the big fish of the day). 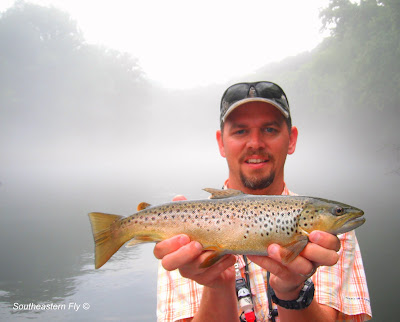 Browns Between Storms
We waited out another storm and continued to fish. Brent was on a mission and we were up against the weather. We drifted into a likely looking spot. Brent was still giving up good water and when Dave had a swing and a miss, he told Brent to go after the fish. Brent tossed his bug on the feeding fish and a nice brown came to the fly with its white mouth open. The fish ate the bug and went for some downed rocks. Brent played the fish to the net and we took the appropriate pictures to prove we had been there. Then the weather turned nasty...
***
I have been on the water through some cold weather, hot weather, hard rain, and sideways rain. I have even seen it rain "up" (think Gump). I haven't had the 'pleasure' of enduring a sideways rain and lightening storm with hail and I hope I never do again. The Weather Channel girl was right and these storms were intense. Boats were pulled to the side of the river and anglers were seeking whatever shelter that could be found. Finally the rain slowed and we bailed the drifter- as we pulled out and made a break for the ramp. Naturally when the drifter was on the trailer, the rods were hung in the truck and everything was buttoned down; the rain slowed and the sun was just starting to peek through some clouds.
***
This day was a good day. I count myself as fortunate, seeing Dave progress from a total rookie to an angler who has some nice fish under his belt and some confidence. Brent is a very good angler who I often have the pleasure of fishing with while always enjoying his company. Being out on the river with the people I get to fish with is a good way for me to spend my time. The people I've had the pleasure to meet has been an excellent way to watch other people catch fish. 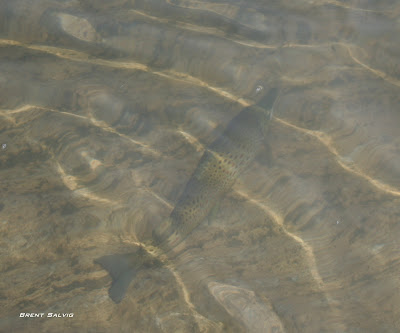