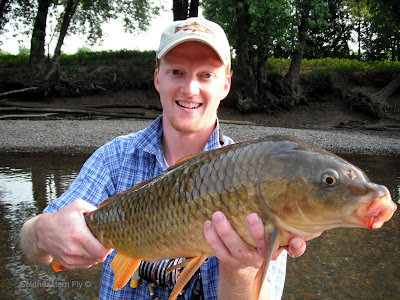 Part II Was Exciting As Well 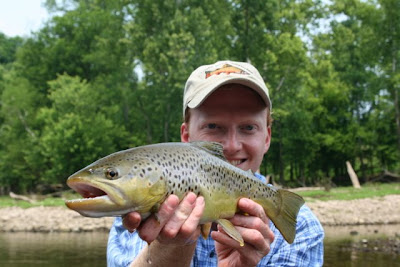 The Browns Were Out & About
We continued on downriver catching some more trout and then we went through a lull. We were leap-frogging some recreational canoes, kayaks and rubber rafts. I think we may have seen Floaty Boatwood and his crew out there at one point, but who can really be sure. Anyway, we caught some nice browns and bows for a while and then we just kind of cruised along in the drifter, taking in the afternoon. Dang it was hot and a short time of relaxing with the anchor out only helped to beat the heat. There was only one cure for the heat. That as we all know is: Fish- Big Fish. 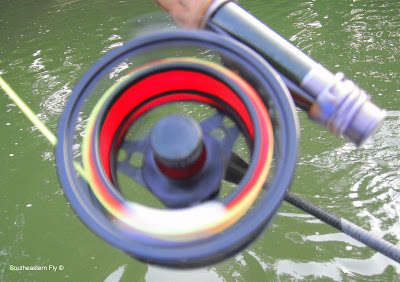 Isn't This What 'Catching' is About? (insert big smiley face right here) 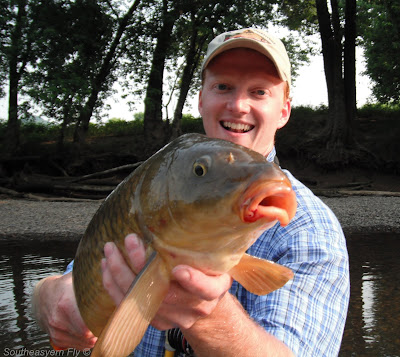 Take That- Carp!
We continued fishing top water. We noticed the fish were not eating live cicadas that were falling in the water. A live cicada will thrash around and flap its wings and make that loud screeching sound while it is trying to swim for its life. We saw very few fish take the live cicadas. The best takes were the cicadas that were already dead and that had dropped into the water. The fish and birds were feeding on the easy meal of dead bugs. The code was pretty easy to decipher, because when a live cicada would fall to the water we would watch in anticipation of a gnarly strike. That strike came rarely.
***
David cast to a rising fish at the end of a blowdown. The rise was unlike most we had been seeing throughout the day. But when the cicada pattern hit the water a big head came up and ate. David set the hook and the fish went straight to the blowdown and broke David off. 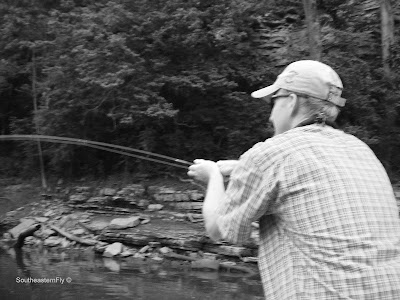 The Fight is On

We searched for a short time and found another riser. David cast to the rise and just like that, the fight was on. David played this fish to the net and shortly thereafter, he became a carp angler. That's correct he has been ruined as a trout angler, for the most part. But, with a trip or two to trout water and some additional treatment in the small rivers and prongs of the Smokies, David can be rehabilitated. 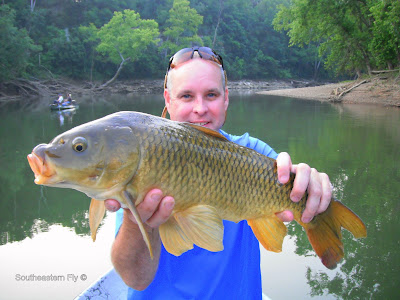 This Isn't Quite as Easy as Everyone Thinks, But Almost (every 13 years)

I couldn't resist and got into some of the action as well. The takes were painfully slow. Slower than even a cutthroat take. We joked about counting to three, I wanted to grab a drink from the cooler and open it before setting the hook and eating a sandwich between the beginning of the take and the hook set didn't seem out of the question. Sometimes it pays to be patient. 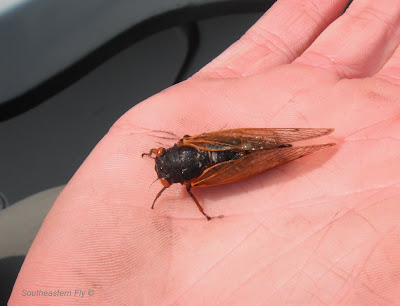 You Should Have Been There
Every 13 years these little bugs come out and make a big noise. The cicadas reproduce, die and start the cycle all over again. If you haven't been out, well you should be. The noise reminds me of being at my grandparents about 26 years ago. The noise outside their home in West Tennessee was deafening. We were getting ready to go to Reelfoot Lake or over to Midway Arkansas to fish, loading boats, packing the camper and cleaning coolers., all the while listening to those screeching bugs. In a way the cicada event takes me back to a great time in my life, where I was taught to appreciate Just Getting Out There, but I guess I didn't realize it or even appreciate it then.... 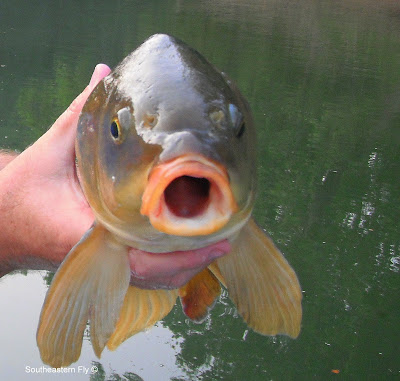 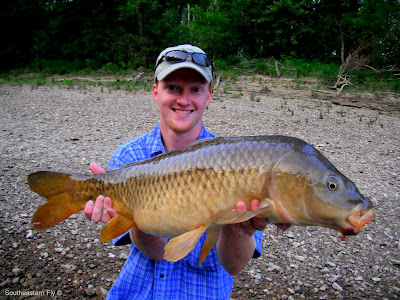 The Big Fish of the Day
So all the fish seemed to be looking up. David and I floated toward the ramp as most of the other folks were getting off the river. David was fishing his 5 weight and tossed the big black bug toward a nice rise. Instantly the boil came under the fly and the fight was on. David and I both had caught the fish we were hunting, so anything else was a bonus. David was putting the 5 weight through its paces and lifting the big fish every chance he got. 5 weight rods are more for presentation, 7-8 or 9 weights are more for delivery of big flies and 10 + weights are made more for lifting. David's 5 weight was bending in the cork. When he would lift the fish toward the boat, the rod would bend and at times it should have groaned, but he kept lifting until the fish was in the net. The head of the fish was all that was in the net. So I rowed David to the bank and he fought the fish from the gravel. Eventually, David got the fish up into shallow water and the fight was over. We snapped the photos and released the fish unharmed to cast to on another trip.
Posted by ____________________________ at 5:51 PM