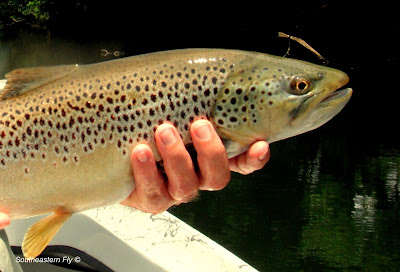 A Decisive Take From This Brown

Howard and I agreed to meet at Lynchburg Tennessee's most famous landmark, the Jack Daniels Distillery. I arrived a little early and scouted some smallmouth water. He came up from Chattanooga to fish the Elk on a hot Middle Tennessee Saturday. Howard is an accomplished angler who has seen some interesting rivers and who, like most of reading this report, doesn't miss a chance to test the water when he can get away. 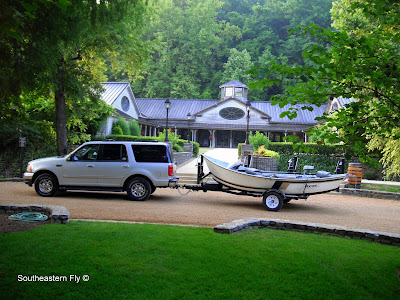 The Drifter Waiting to Get on the Water...and So Were We

There were not as many rise rings as I like to see when we launched. So, we started the day on nymphs. The new nymph that we have been using produced a couple hits and a couple long distance releases and after a long stretch of closed mouthed fish didn't take a second look we switched to the usual pattern. We didn't see much of an increase in the action, but it picked up a little....very little.

Howard stuck with it as we moved into one of the shoals that usually produces a nice fish or two. We drifted through and Howard had a perfect drift, the boat was in the right spot, with the fly that has always been a big producer....and we got nothin. We rowed back upriver for a second pass and still...Then there was a rise, two rises and more. We put a dry fly on Howard's Sage rod and within the first cast he had a hit. Then Howard put the fly on a feeding brown. The brown took the fly and broke the tippet. We quickly solved the problem with some 12 lb tippet on a 20 lb leader. 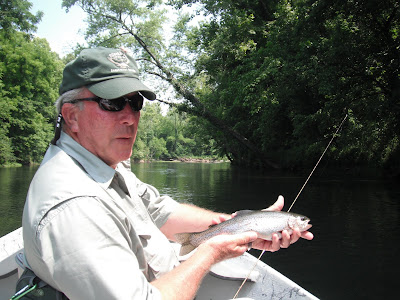 One of the Usual Elk River Rainbows on Top

We fished to a couple of big fish that were holding in a small pool. Then time started pressing and the pigs of the lower river began calling. Some people don't see the fish that we get to see on the Elk. The larger fish can be elusive and wary. Some days they won't come out and play but if you do everything just right. "Just Right" meaning, the right fly, with the right cast for the right presentation and then to the right fish. This river can be very exciting. So, we pressed on catching rainbows on dry flies and watching a canoe or three go by. 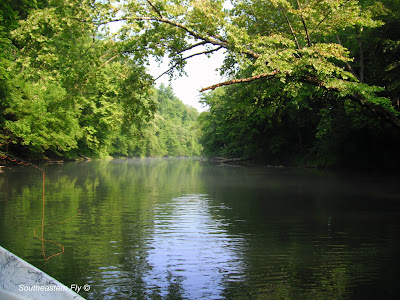 It Wasn't Too Crowded 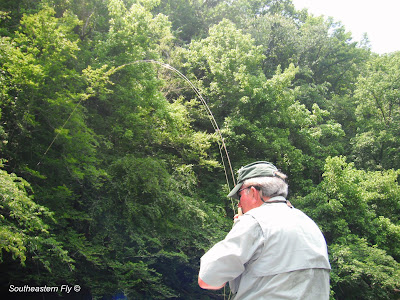 As I stated earlier Howard is an accomplished angler. He has a nice cast and gets that excitement in his voice when the fishing gets real good. We set up on a bend and fished the structure, that in the past had been marginal and probably a little over fished. Howard pulled a couple rainbows out of there. One of those rainbows was textbook. The fly landed, the fish after and Howard set the hook. He played the fish into the net and we both commented on "how 'its' supposed to be". Then we entered a particularly good section. We were picking up a fish here and there, then "it" happened.

***
Howard laid the fly in a nice pocket, just about the time I looked away to watch for the next rise. When I looked back a big head was coming out of the water and a big white mouth was inhaling the dry. Howard came tight on the line and the brown began to grind to the bottom of the river. We chased the fish up the river for a bit. The fly was lodged in the roof of the brown's mouth, so the only worry was a sharp tooth against 12 lb flourocarbon.
***
The brown took us for a quick ride and didn't come quietly. Howard played the fish perfectly into the net and after a few photos, to help the memory later, released the fish for another fly and another day. 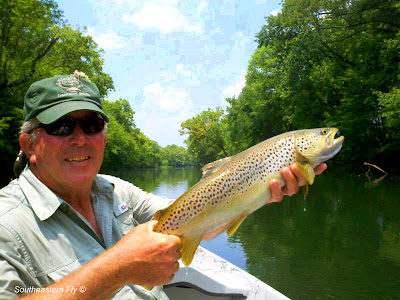 We continued tossing the dry to feeding fish. The fish were making us work for them. We didn't have the usual numbers of fish, but we increased the average size with the brown. We were a little pressed for time, but before we were off the river a second date was confirmed for a return trip. Hopefully we will have as nice of a day as this one turned out to be. Stayed tuned as Howard comes back for a return trip on the Elk....
Posted by ____________________________ at 2:01 PM