Bob and David on Day II 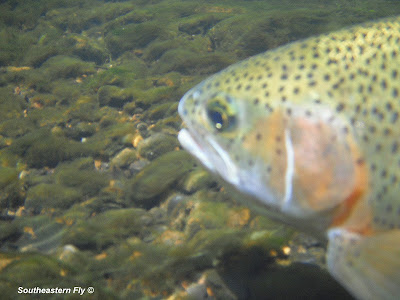 The Best Angler on the River
After eating breakfast at Sharp Lodge, not to mention a good night's rest, we headed to the river for an early float. David and Bob seemed to be prepared and maybe a little sunburnt from the float the day before. We launched the drifter early, before most of the other boats and immediately picked up some fish on nymphs. The water level was about as low as it gets and it was important to get a near perfect drift. When the guys would get that drift the fish would respond. If the guys didn't get that drift, it was a long time between strikes. 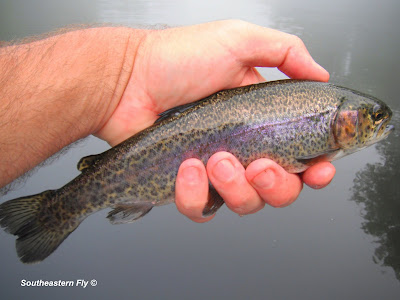 This Was the First Fish of the Day 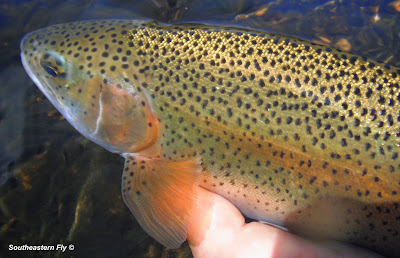 ...Then We Popped Some of These
We went through a bit of a dry spell. After we got the casting and mending to come back, David was the first to hook up. We got into a long run against a rock wall. David gave the indicator a little slack and when the indicator was floating the same speed as the current, the rainbow took the fly. David is an excellent angler and was on the hookset as soon as the indicator moved. That was it, the bow was on and the fight was too. David played the fish and got the bow into shallow water. Before we knew it the bow was in the net. It was a classic nymph take and the hook was lodged nicely in the upper lip of the healthy rainbow. 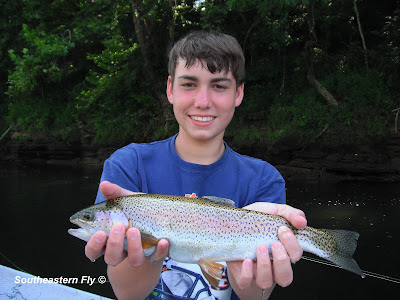 The Results of a Good Drift and Skilled Hookset 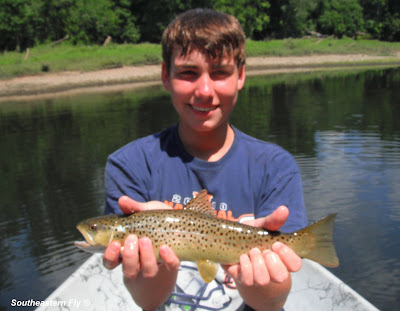 A Frisky Brown Trout
David continued to concetrated on the good drift and then we arrived at a nice hole for sight fishing. While we sight fished David with the nymphs, we also gave Bob chances at good fish with dries. David hooked up several times, while both anglers brought fish to the net. 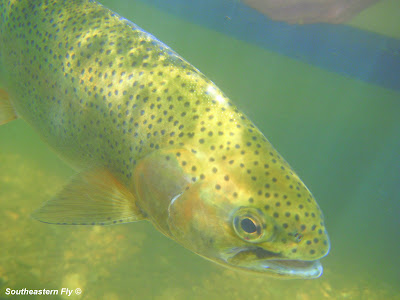 Rainbows Were the Fish of the Day...and Weekend
While David was having a good day, Bob seemed to be enjoying seeing his son bring some fish to the boat. After lunch and a nice pulse of water, We put the guys on big flies. Bob eventually ended up a streamer and we went to banging the banks with light flies and sinking line. It was hot and after a couple of days on the river the guys were getting tired. Bob was a trooper and continued giving the steamer rod a workout, while David and I gave him "pointers". As we approached the ramp the rod bent and the fight was on. Bob fought that fish while I got the boat into shallow water. The fish came to the net and after the appropriate photos were taken we released the fish and a short timelater we loaded the boat on the trailer. 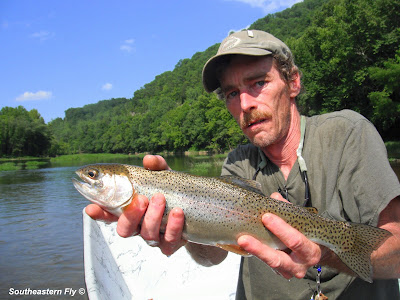 Another Rainbow for Bob
It was good to fish with David and Bob again. The river in Middle Tennessee are producing well right now and when they are paired with the Afternoon Terrestrial Floats there is potential for some great afternooons on the river. 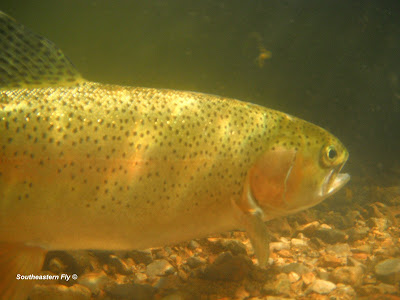