Anthony & David on the River

Just a Few Hundred of Our Closest Friends
Anthony and I started out for one river and then we had an unforeseen change of plans. Later, we ended up on another river. We arrived about an hour later than we really wanted to arrive and were in the midst of a "flash-mob" of watercraft. Everyone was enjoying the river, but it made fishing pretty darned tough. Anthony was hooked up fairly quick and it seemed like his luck far outweighed my own. The only reason it seemed that way is because he out-fished me throughout the day. 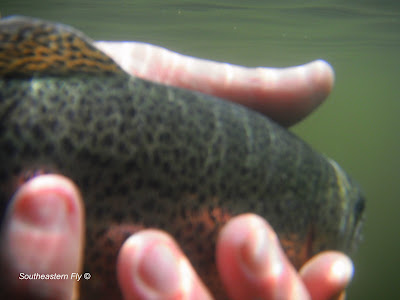 The First Fish of the Day 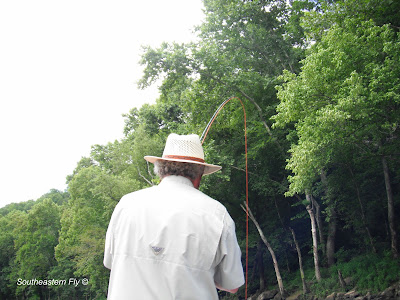 Anthony Up Front & Hooked Up 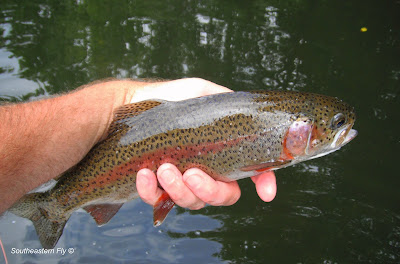 Deep Water Nymphing
So how does an angler catch fish in the midst of hundreds of other watercraft? First off it certainly isn't easy. The best way to get the biggest numbers is to have two people fishing and one managing the drifter. Wading can be effective if you have the patience to wait as the watercraft keep coming through. Sooner or later there is a break in the boats and the fish ill start eating again. Either way the day is not nearly as good as a day when the other boats are not there. However, although it is tough, keeping in mind that those other people are just out to have fun, like the anglers. One thing we noticed was the families who enjoying their day, which is a good thing to see.
The fish are on the shoals but only during the breaks in watercraft. The holes are not always full of fish, but they are certainly seeking structure and they will find it. Also the trout will get in the middle of the schools of shad and when the shad go, so go the trout. Trout aren't brave and will flee when they are alarmed. Patience is key.

One More For Anthony 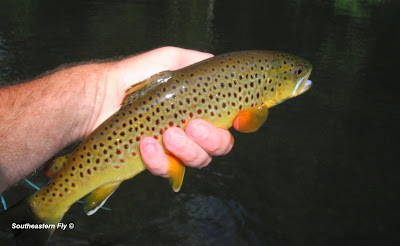 Stoneflies.
It was my turn again and with only one decent fish on my line Anthony was nice enough to give me clean shots on a good stretch of the river. After a few hits and some more misses this colorful brown made the trip for me. We found a spot in the midst of the canoes and kayaks and the fish came out to eat. This fish was laying in cover and ready to eat. After the fish was released back to his holding spot we continued on to the ramp. Which was full of people enjoying the day. I was asked a couple different times if I had ever seen the river with this many people. I have seen it this way a couple different times. Once was three years ago and it was a lot like this, however there were more boats than canoes. And, last year I saw it like this on two different days. We still caught fish but it certainly wasn't easy. What are we going to do about running trips this Summer? I have plans already made to take anglers out for good days on the rivers.