Let's start with the Caney Fork- School is back in session and the Summer vacations
are slowing. College football is just around the corner and so is Fall. The canoe trips should be slowing down a bit, which will give way to anglers coming back to the Caney Fork. The weekend water release schedule remains favorable to recreation.
For the angler this is a good news- bad news situation. The good news is the wading angler has opportunity. Midges have working a bit on the Caney and nymphs have been taking the larger fish as of late. Terrestrials are still working but the fish are getting smarter after seeing the same hopper patterns over and over. Think a little farther out of the box. The weekday generation schedule is best for floating on one generator right now. More good news is that the weather forecast calls for cooler temperatures. Cooler weather hopefully will bring less generation. The bad news is the fish are skiddish and are eating, but only it seems, when necessary. We have sight-fished to some trout lately on low water and found most to be sulking at the bottom of their favorite holding lie.
The Obey- Generation is not the wading angler's friend and it doesn't like boats much either. The US Army Corps is running two generators during most of the day, presumably to keep up with demand. Hopefully as Summer gives way to Fall we will see some lower water, at least before the draw down of the lakes. But, for now, if fishing from a boat on high water look for slower pockets against the bank and fish those seams!
The Elk- On a recent trip to the Elk River Anthony and Brent joined me for an all day float. The 250 CFS release is a bit lower than we have been accustomed to, but the fish are still there. The water upstream, by the dam was a bit warmer than expected but still cold enough to comfortable support trout. The water was stained the usual off green color and sight fishing in the deeper sections would be of no use. So we went to the nymphs. Anthony tried a small streamer for a bit, but when we boated some rainbows on the usual bead head stuff, he went back to deep dredging under the indicator as well.


We continued on through the day This day revealed some strange occurrences and one of those was the water seemed to clear as the miles clicked off. The water was never crystal clear throughout, but did get a bit more clear as the day wore on. And on another note the water seemed to get cooler as we floated. I need to take the thermometer to confirm the coolness, it did seem a bit strange and noticeable to more than just me. 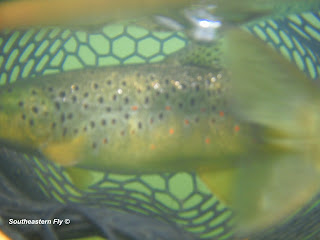 As the water seemed to clear we tried hoppers and on a particular stretch of river, that normally doesn't hold large populations of fish, we floated a hopper through some likely looking water. Just before I was ready to push on and we were ready to make a move, we saw a rise in the middle of the river. We got a hopper over the fish and it produced a drive-by. A refusal sometimes can be a great thing. Sometimes just the interest in the fly can result in the angler's confidence in the fly just a bit longer. At times this can be a bust and at times it can be as rewarding as any decision made that day.

We hung in the area and tossed a good sized offering along a grass bank. The bank tuned to weeds under a tree and that is where a nice brown had set up shop. The hopper floated a for a bit and the brown swam to it and rose slowly. Then as has been the case of many dry flies this season, it was soon gone and lodged in the trout's mouth.
﻿The fishing in Middle Tennessee can be a bit slow this time of year. The fish are feeding but are more weary of traffic. Wade slowly and wait for several minutes and for the waves of your walking to settle, if possible, before casting. Mending is another item for consideration. Mend big and mend early. Mend out of the zone of the fish when possible. A reach cast can be your best friend when the water is low and the fish are on edge from heavy traffic. If you have to mend a couple feet from a feeding fish, that fish will probably not eat. Sure anglers get lucky from time to time, but as a general rule the instincts of a fish will win over a sloppy cast or splashy mend.﻿