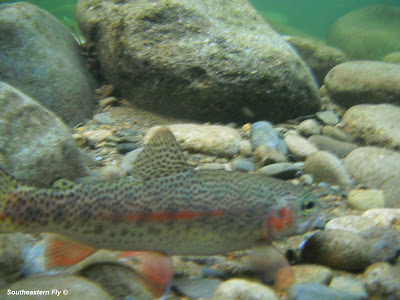 A Greenbrier Rainbow
...and after the evening rain came to our side of the Smokies I was back on the water only this time it was higher than expected. I started off with nymphs only to find out my heart wasn't in it with the nymph rig. After three casts and three less than perfect drifts I was back to the dry flies. I learned from a client that if you are on the water, fish how you want to fish. So I took out a big Thunderhead, one with enough hackle to make a hairdresser whimper and tied it on. I doctored it up with Frogs Fanny and started upstream. The fly drew some attention and then in a likely looking spot a rainbow rose, as only a wild rainbow can. For those of you who have fished for these fish you know exactly what I talking about. Just like that the skunk was off. So fished that Thunderhead the rest of the morning and walked back to the truck satisfied,for a while anyway. 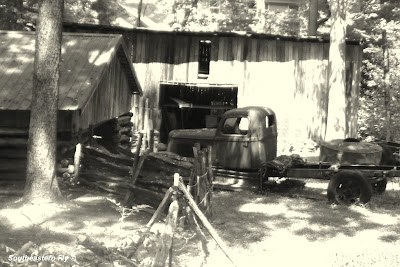 I have always enjoyed East Tennessee. The heritage, the old farms, the music and its instruments and the old trucks and machinery. While out enjoying my time on the river I also had the chance to see an old farm. Although I didn't want to cross any boundaries as an unwelcome guest I was able to get some photos of some pretty interesting stuff. My outings and this blog aren't always about fishing. I do enjoy trying to help people catch fish, but it always isn't about the 'catching' it can about the adventure too. 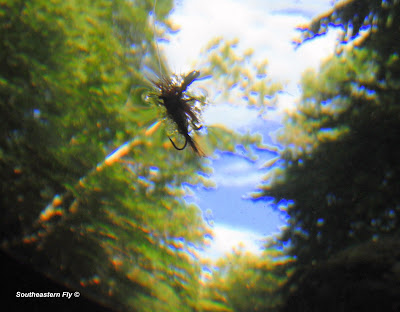 A Parachute Adams from the Trout's View
The morning came and went. I headed back to the cabin for some lunch, then we checked out the Believe-it or Not's, the cotton candy stores, and the Carmel Corn t-shirt cigarette outlets of Gatlinburg.  That's right they all run together after 10 minutes of too much carnival overload. The sun came out and the girls eventually headed back to the pool. I headed back to Greenbrier for the evening hatch. There wasn't much of anything hatching except for tubers down low and a wedding party on some shoals. I continued upstream and stopped at the end of the road. 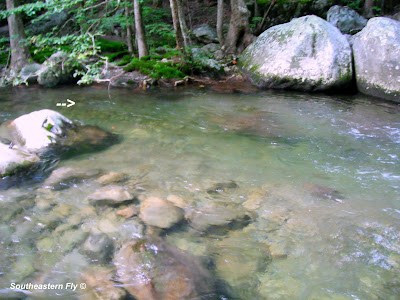 Most of the Fish Came Water Just Like Where the Arrow is Pointing
It took a while to dial-in, around the big boulders and small plunge pools. The fish were not located where the books said they would be located. But that's OK because I have past experience to fall back on. The fish were taking in oxygen on the riffles and more shallow runs. The Thunderhead did not work with the lower water levels. The size #12 Parachute Adams was soon on the end of the tippet and the bite was on. The fish were hitting better over the right water, as is usually the case. And as is usually the case it takes a bit of time to find out what water is the right water. Eventually it was just another afternoon of drifting the fly in the current. 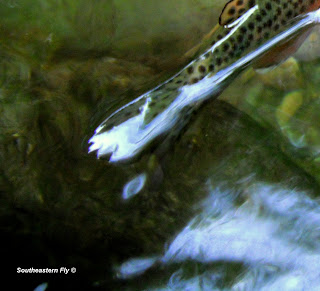 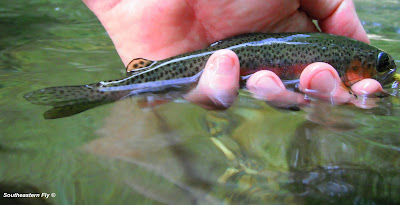 Eventually it is time to come home and get back to work on the Middle TN tailwaters. The drifter is ready to go on the next adventure and we have a few that we are working on now. With Fall just around the corner we are getting ready for the cooler weather floats and pre-spawns and egg patterns. Until then we are still on terrestrials and going for the smaller midges. Also, Tricos are just around the corner and waiting for their chance... 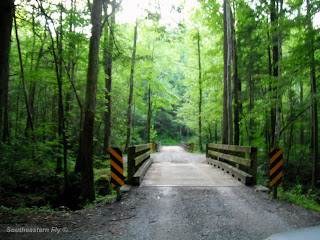