Elton and David decided to spend a day on the river fly fishing from the drift boat. The weather in Middle Tennessee has been a bit on the quirky side this year. It helps to at least take a look at the temps before doing outdoor activities. The temperature, it seems, has either been 15 degrees above normal or 10 below normal.This time it was the lower of the scale and there was a misty rain to make things more interesting.  We all met at the assigned place and at the agreed time and launched the drifter. When we pushed away from the gravel bar the misty rain was still falling and there was a blanket of fog on the river, that was thick enough to cast a fly out of eyesight. Yep it was a good day for fishing. The weather kept most of the undesirables of the crowd off the river  and when Elton hooked up early on the usual nymph, we decided it was just good to be on the river...and of course catching a few fish made it just that much better. How much better had yet to be determined but the river would give up some of its goodness before the day was complete.
We decided early that nymphs would be the way to go. We had the usual discussion about my theory of clear days being better than cloudy days, and how the sunlight warming the water, helps to get the bug life cycles moving...(sunny days have been better most times, unless the temps are super high, then clouds help, but you get the picture.) Anyway the guys were floating along enjoying the day and David began to get in the groove with his cast, which seemed effortless from where I was sitting. Both guys were casting good as the fog lifted and revealed partly cloudy skies. When the sun would pop through the rises, which were few, became more frequent. The rises on this day wouldn't be as frequent as most days but the fish still were feeding pretty good.
I spoke with Mr. Currie several weeks ago and he advised the hatchery has been releasing more brookies, to be stocked, earlier in TN to make up for the rainbow shortage. The rainbow shortage is due to a water quality problem over the winter. We have found some nice brook trout already this year and if the weather and specifically rain will hold off, which will hold off the heavy generation, we could be seeing some nice brookies on the water this year. The good thing about the brook trout is, they made up the boat slam and David's slam as well. So we had good things going early in this trip, thanks to the efforts of TWRA and the Dale Hollow National Fish Hatchery.

After lunch we had a run of fishing that was a bit hit and miss. We picked up a couple nice browns and some decent rainbows. We also began to see the miniature browns that were recently stocked. The small browns do not have their instincts yet and can be aggressive toward a moving fly. We decided to end the day fishing dries for stocked fish, especially after bringing several freshly stocked browns that were in the 12" + range.
The guys ended the day on dries. We chose a couple Parachute Adams A fly that seems to catch more fish than any other dry fly and some say all others added together. As I said last week the fresh browns were aggressive and will even let you get a little sloppy on the drift. I highly recommend trying to be a little sloppy when fishing the access points of Middle Tennessee rivers, at least until these little hatchery brats get their wits about them. Oh and there was one more fish I forgot to mention. 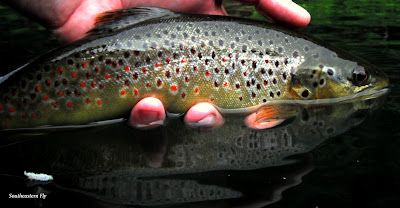 Like I said a couple times in this report Elton was hooked up quite a bit. David was too, but Elton produced a large number of fish. So, as we floated down the river David noticed a deep trough. I had never fished that trough or for that matter never really paid attention to it at all. David was fishing the middle of the river and pulled up some line, then launched a beautiful cast that landed at the top of the trough. Elton watched for a second and then he dropped his nymph right on the line that David was fishing before David chose the new water. As we drifted slowly along David and I watched in anticipation of the indicator taking a dive. The indicator drifted along and Elton said "there's one". His fly had drifter down the gut of the river and was picked up by a head-shaker. The fish had to finish the first run before it turned on its side to show us its length. That s when a lot of stuff happened in the boat. The net came out, the oars began to work and Elton played the fish, keeping it away from an old blowdown that had been in the river for several years. The fish would make a run and Elton would make a stop, the fish would turn away, only to turn back toward the blowdown and Elton get the head turned away again. This fish had done this dance before, but we were fishing some heavy tippet and Elton was in control. Elton got the head up and we decided that was the time to slide the big brown into the net. We netted the fish and right when the fish got to the net the fly popped loose. Although this fish was a bit heavy and tough to hold, we took the usual photos. Elton earned the fly and 24" of tippet to mark the length of the brown trout he just landed. Handshakes and headshakes were given by all, then we headed off down the river looking for the next fish. This day was a good day. David caught the largest bow and earned a slam. Elton landed the big brown of the trip and made the 20 + Club. The guys were a lot of fun to fish with and float with over the course of a long day and I look forward to a Fall trip and the search for other big fish.