Butch and David on the River 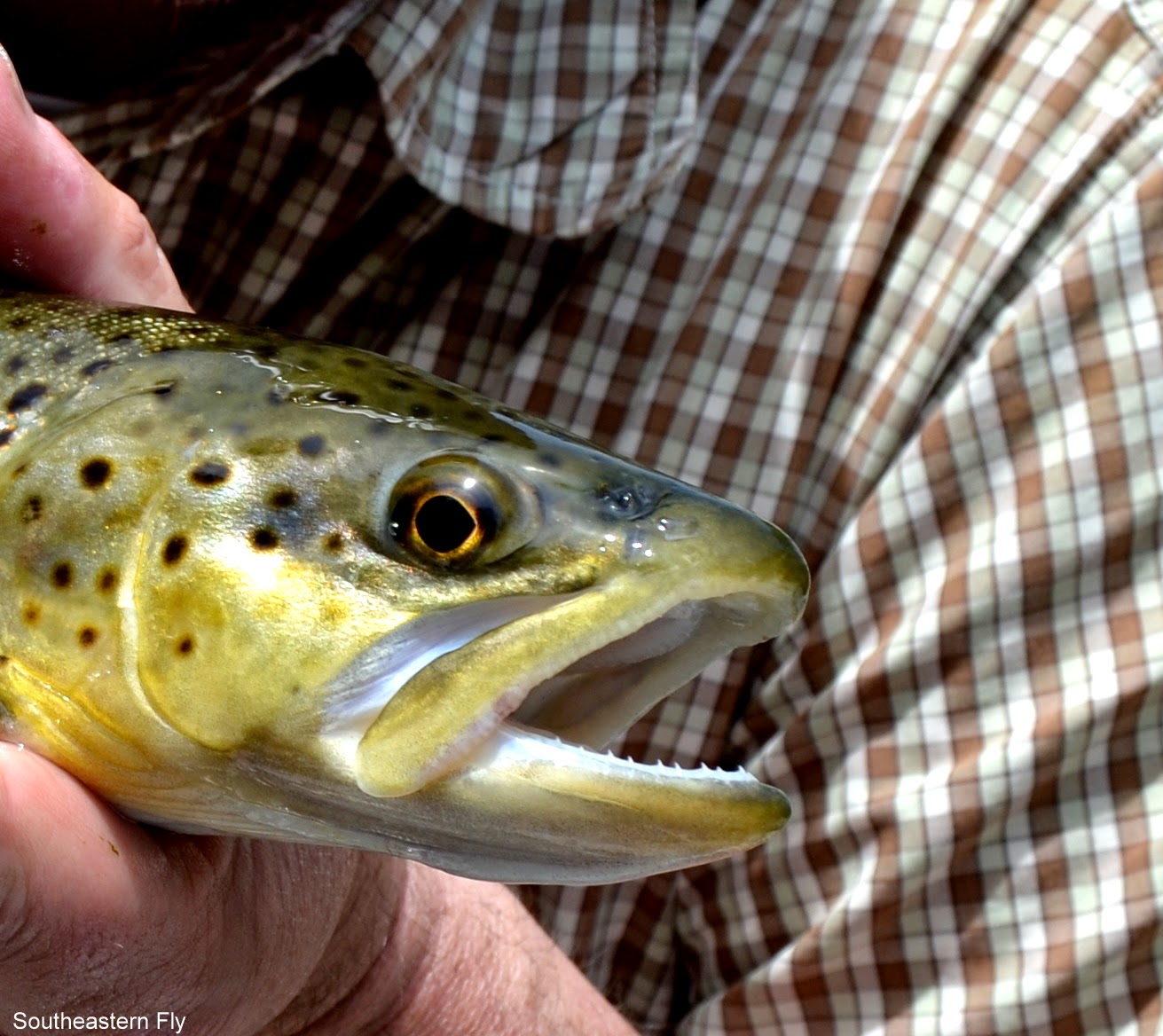 After fishing with us in November Butch returned and this time he brought David along. David previously lived in Alaska and had fished some with the long rod. Both guys were easy to float with and wanted to bring some fish to the net while enjoying this day with outstanding weather. 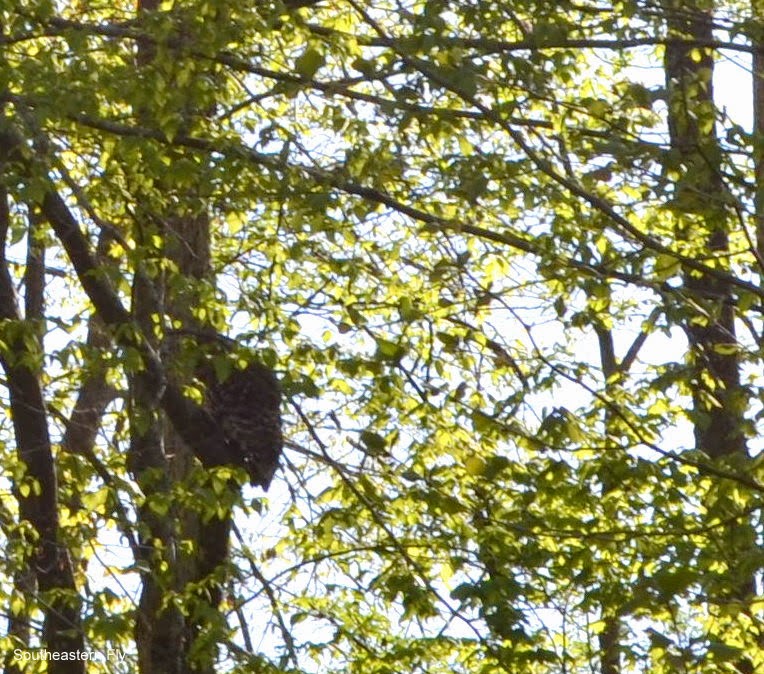 We started the float with a barred owl flying across the river and landing in the trees just far enough away that we were not able to get a clear shot with the camera. I snapped the picture above while trying to row and as we moved through the first riffle of the day. Anyway that wouldn't be the last of the wildlife we would see before the end of this float. 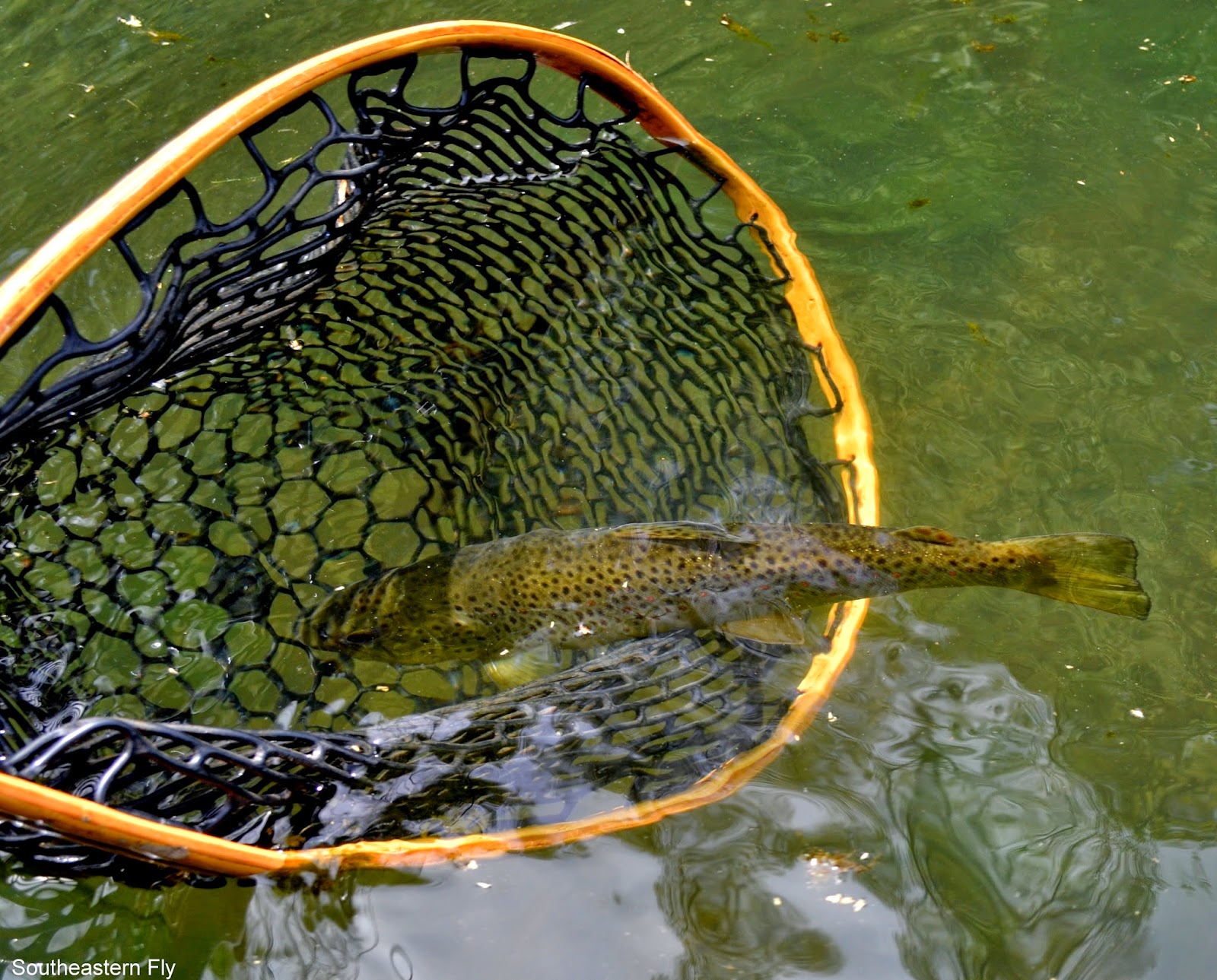 Butch took the rear seat while David stood in the front casting brace. Butch knew the Southeastern Fly style of nymphing and relied on that previous knowledge, while David had the usual short learning curve. We worked on the normal casting and mending, and more mending. David began to catch-on to our style. We floated through a likely section twice and on the second time through David began to pick up fish. First one fish then another and another. Pretty soon Butch began talking trash from the rear seat. 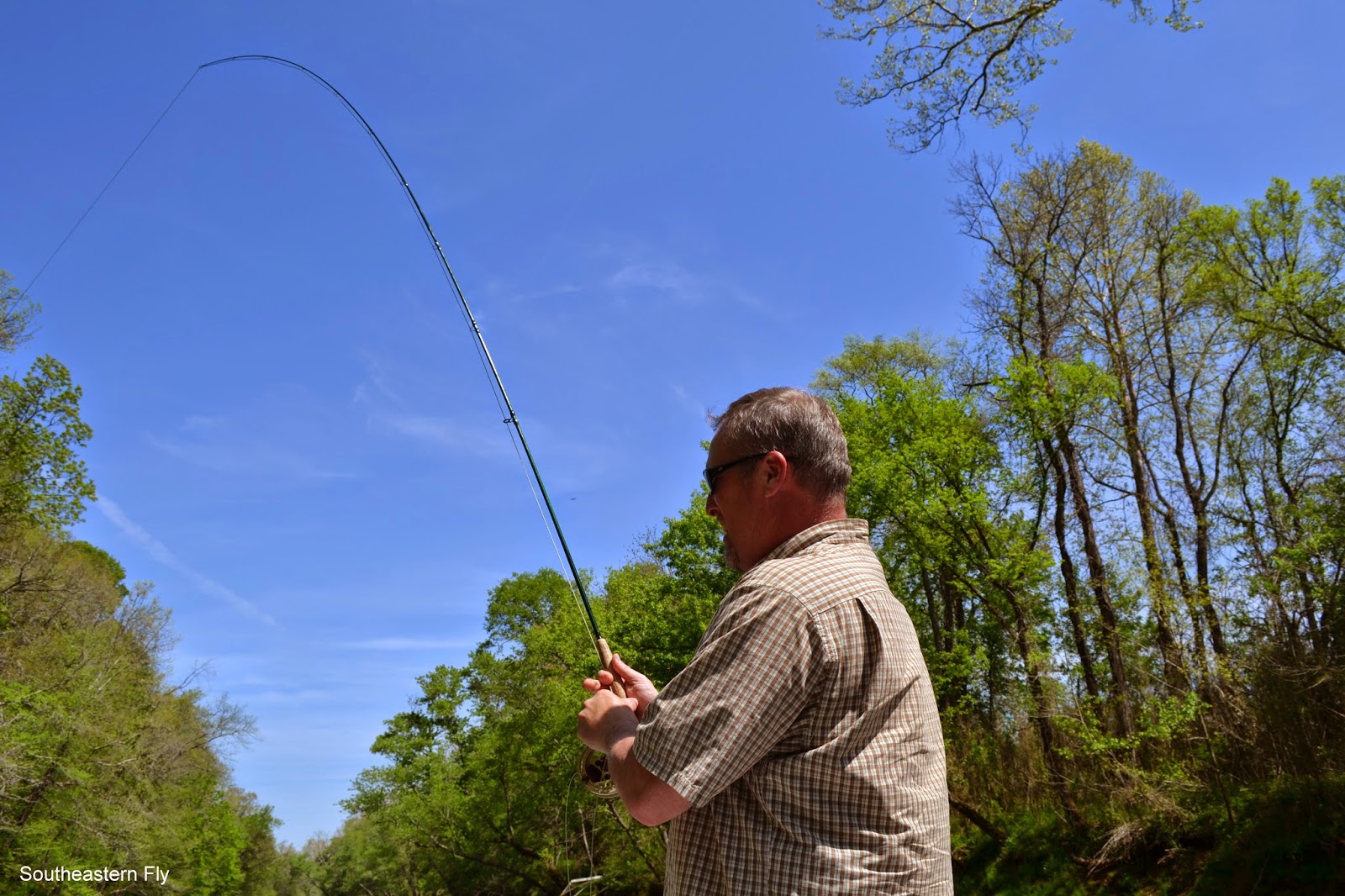 Butch was dialed in pretty tight as well and we were moving along picking up a fish here and there among the goo that was in the river. The pollen has been thick and the river could use a stiff round of solid generation to move some of that goo along. When we got into the thickest goo of the day we reeled in the flies and made a move.
-
David laid a fine cast into some clear water and set the hook when the indicator took a dive. The fish was good and pulling like a brown. David handled the fish like a pro and soon the brown trout was in the net. David then turned up the trash talk a notch. 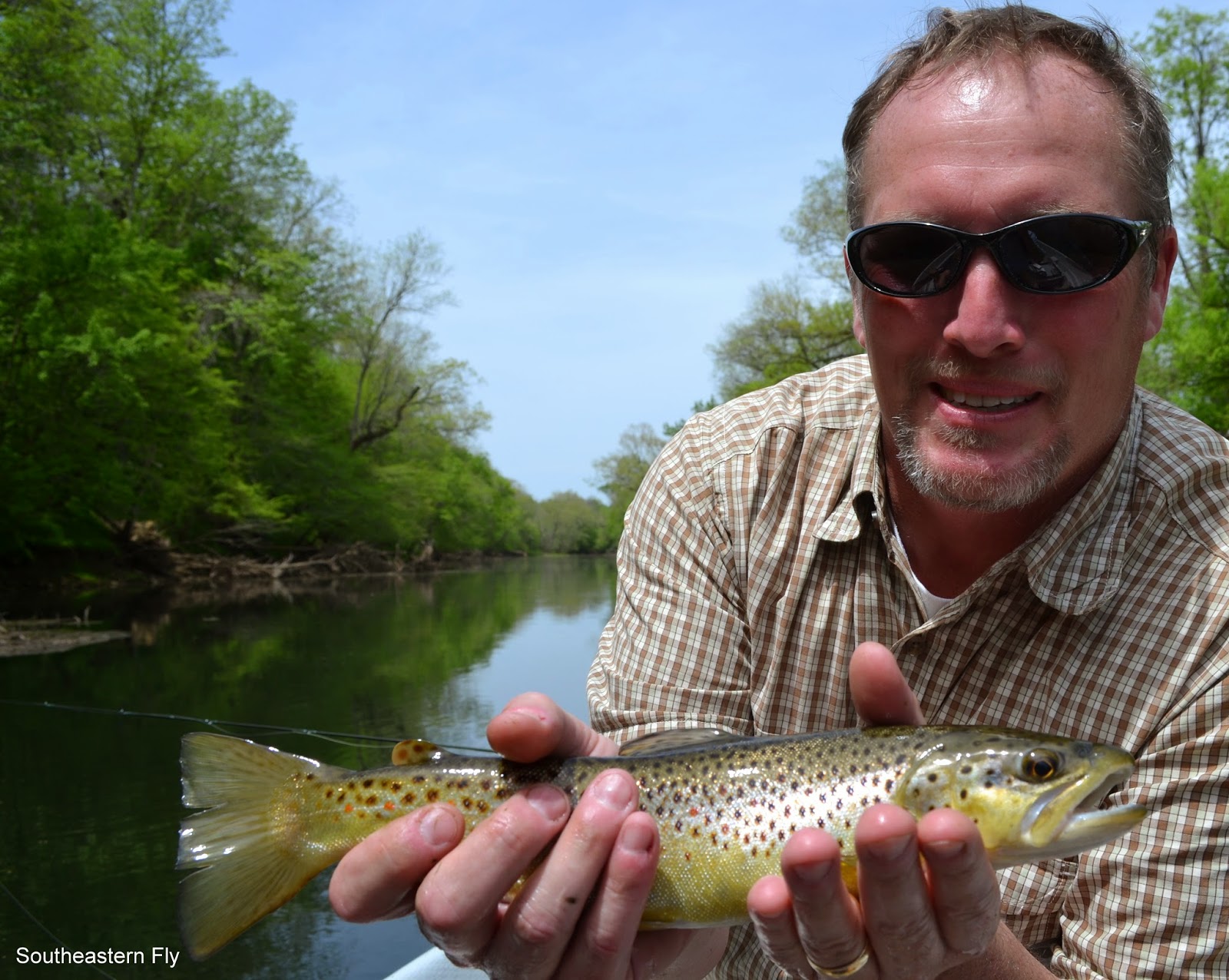 It's not a good idea to leave fish to find fish... We slid into a likely pool of rising fish. There were quite a few fish in one area and those fish were hungry. The guys were hooking up and getting hits on what seemed like every cast. We put Butch on a dry and skiddered (that's a fishing term) the fly along the surface, fish began to react. When it is only small fish hitting and we know the better fish are there it is tough to stay away from a bigger offering. We floated the section again and lunch was looming. The guys made the decision to forgo a cooked lunch, grab a quick bite and float the same section a couple more times with big nymphs before racing to the takeout. After a quick lunch we were right back at it. The fish continued to respond to both guys flies. After a couple more passes we had to leave the area and we fished our way to the takeout with hoppers. We gave the hoppers time on the water but really couldn't fish them as hard as I wanted. There were drive-by's, sniffs and a couple takes, so with the action that was produced I am ready to float nymphs in the mornings for some numbers and get on hoppers shortly thereafter. 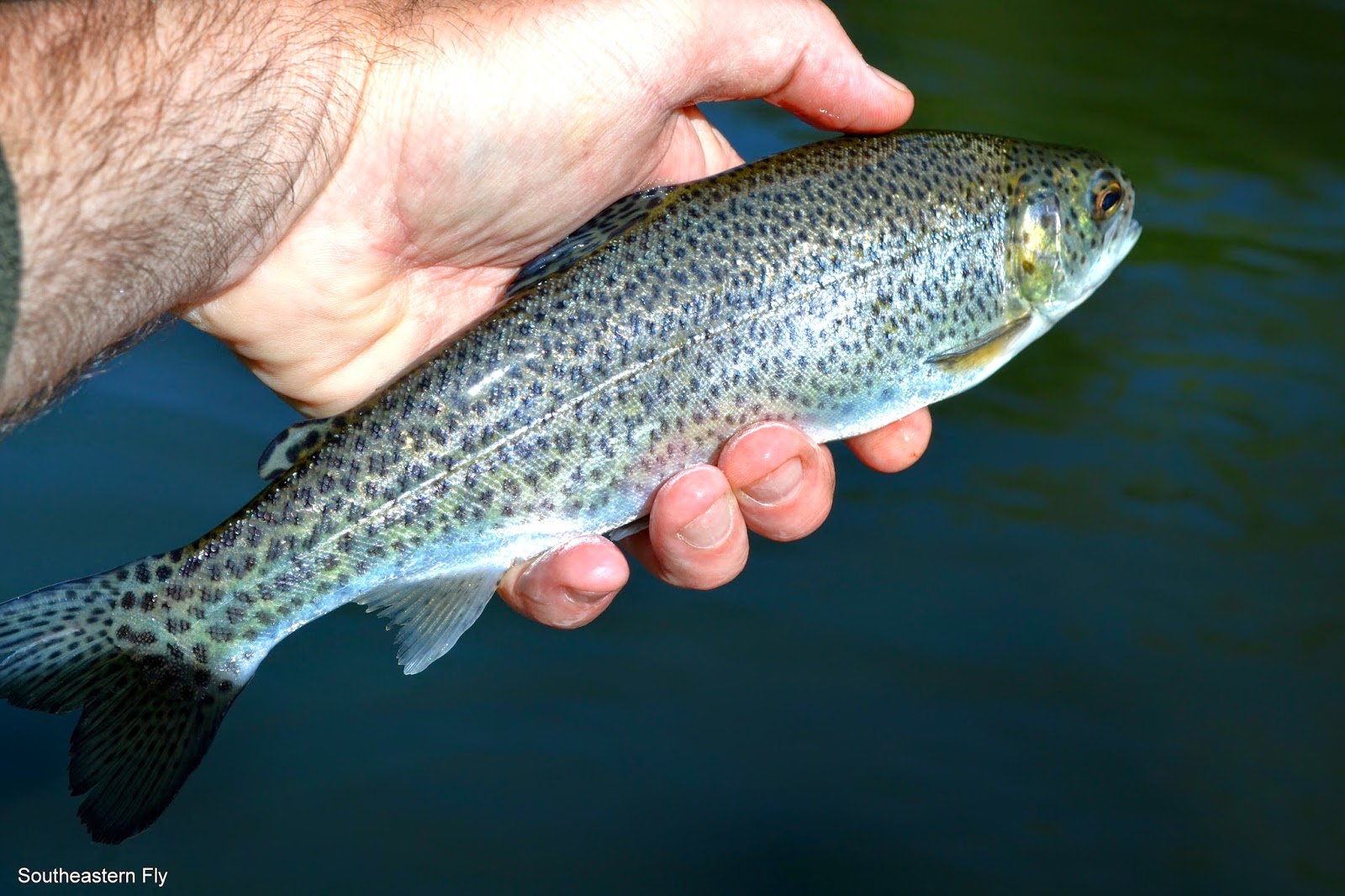 With a deadline approaching we rowed out the last hour or so, stopping only for the oarsman to take a break or two. Then we loaded the boat and raced the guys back to their cars. The last time I saw David he was speeding out of sight and Butch had struck up a conversation with another angler. The guys brought their fair share of fish to hand but the big-one (or Big-un) hid just out of reach throughout the float. Butch still didn't get his cedar-plank grilled salmon, but on the next trip if the daylight is long enough and the fish aren't hitting right at lunch we will get that cooked lunch done.
4
The weather and generation have been cooperating for most trips and if one river is generating we usually head to another to make it a good day on the water. So, if you want to set up a day on the river just email or call/text 615-796-5143.
Posted by ____________________________ at 3:32 PM