Alan on the River 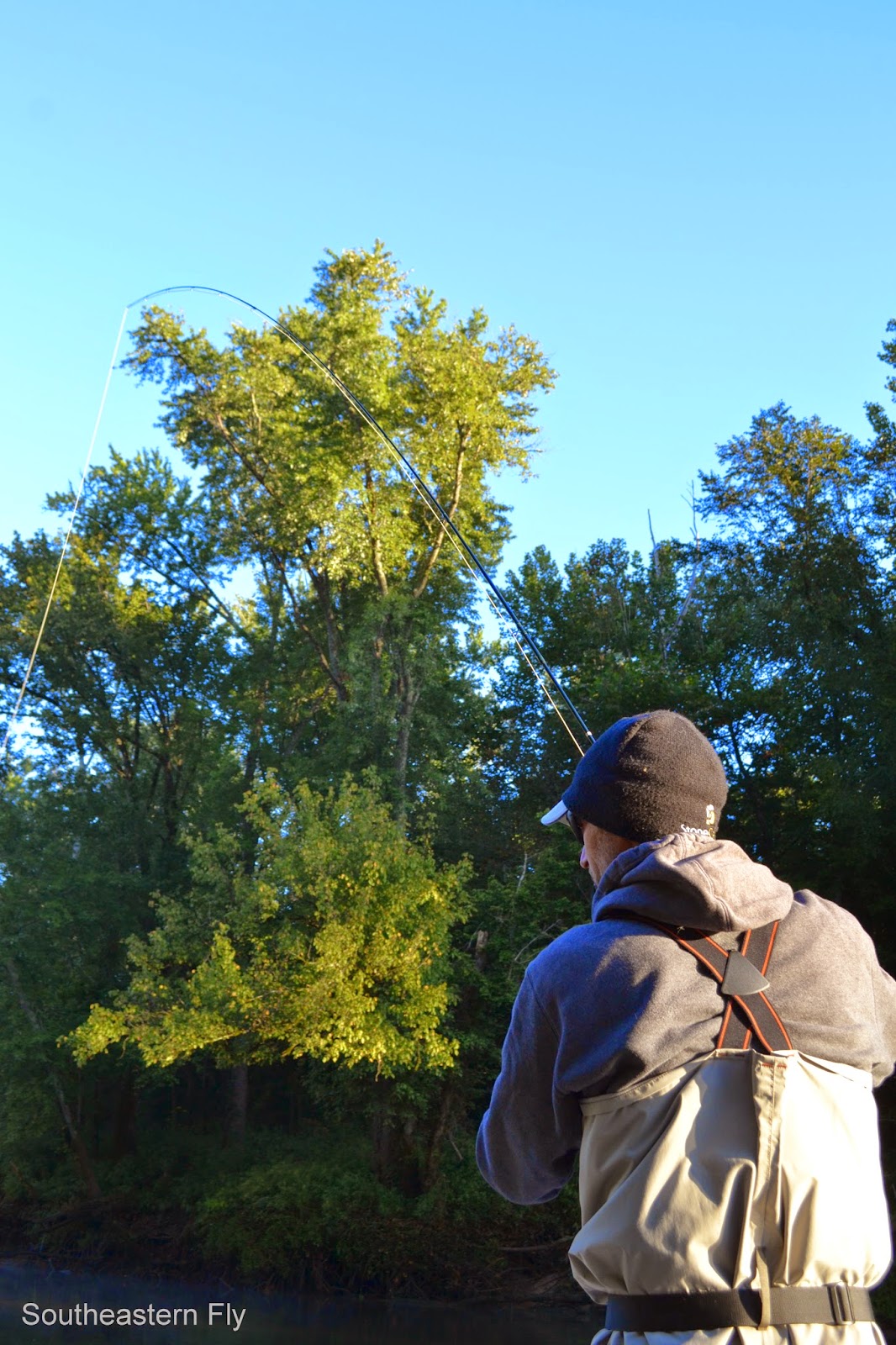 Alan came in from Reno for a 3 day fly fishing marathon angling experience in Tennessee and Alabama. Alan called and we set up his trip for 3 days of fly fishing and fun. We sent Alan to the Caney for 2 days and onto Smith Lake for his 3rd day. 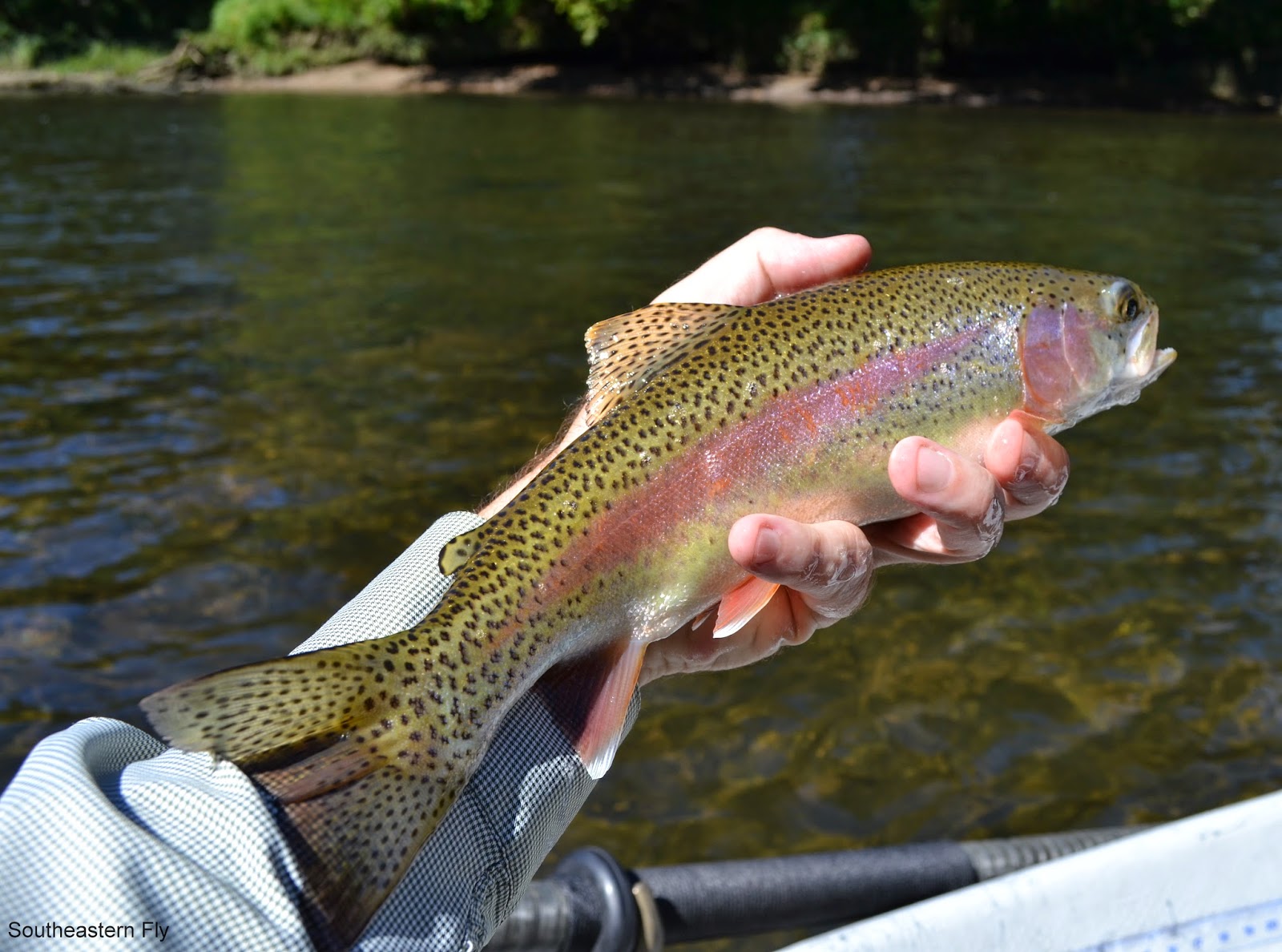 We started early on nymphs and within a few casts Alan pulled the first rainbow to the net. This was a glimpse into the remainder of the day as the rainbows were "on". Alan was dialed into his casting and real close on mending. He started off hot on the nymphs as the sun came up over the trees. 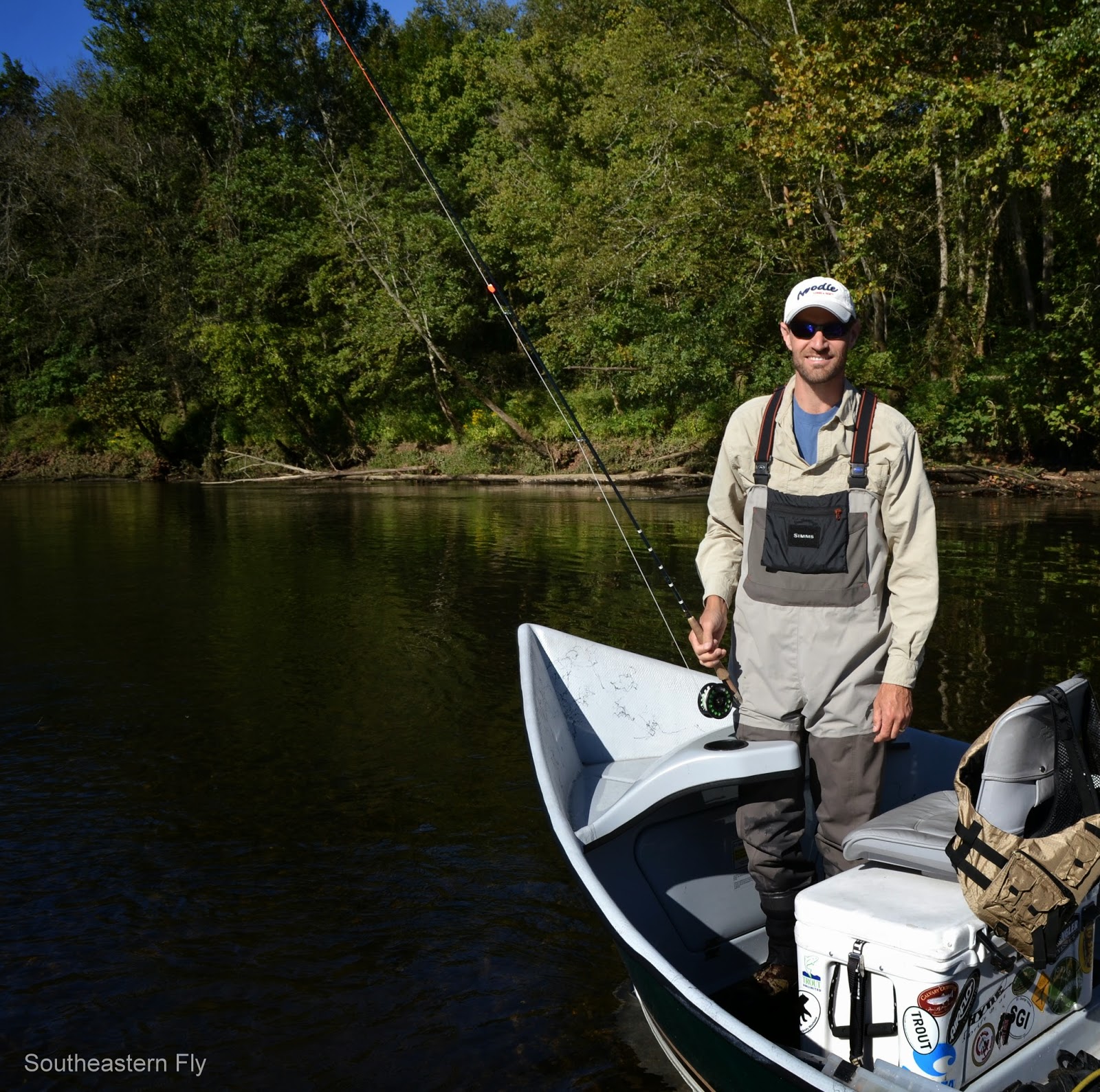 We fished the nymph hard and it produced. As the sun warmed the water we went to the top and tied on a terrestrial. We fished the top just as hard and only found one fish willing to eat up their. We discussed the options and made a decision to fish nymphs through the better runs. 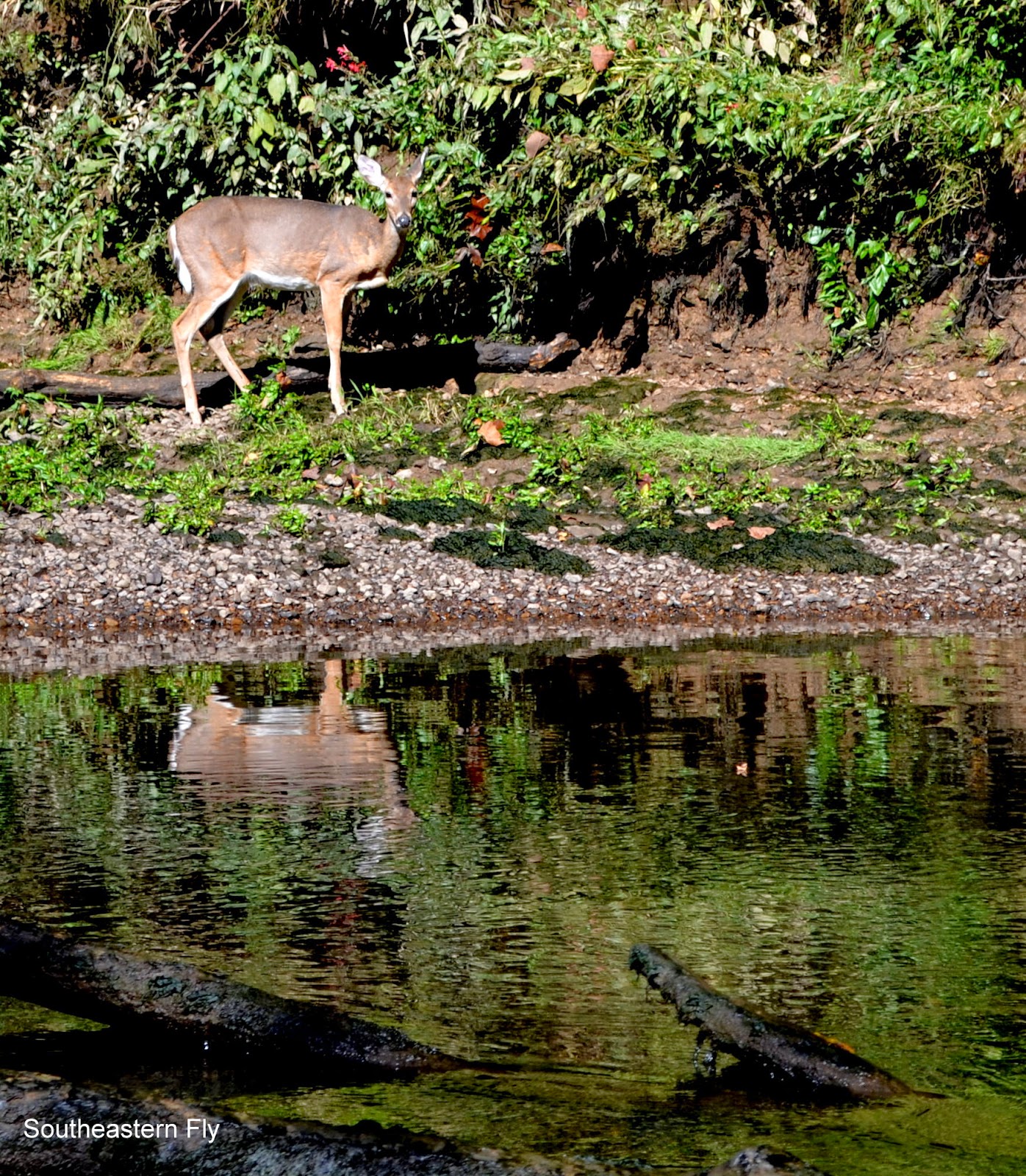 The wildlife came out front and center for this float. We were able to get photos of some wildlife, but not all that was out on this float. So as we fished along and watched the different animals the day was coming around to "our way of thinking". We went back to the nymphs and right away the rainbows came back to the offering. 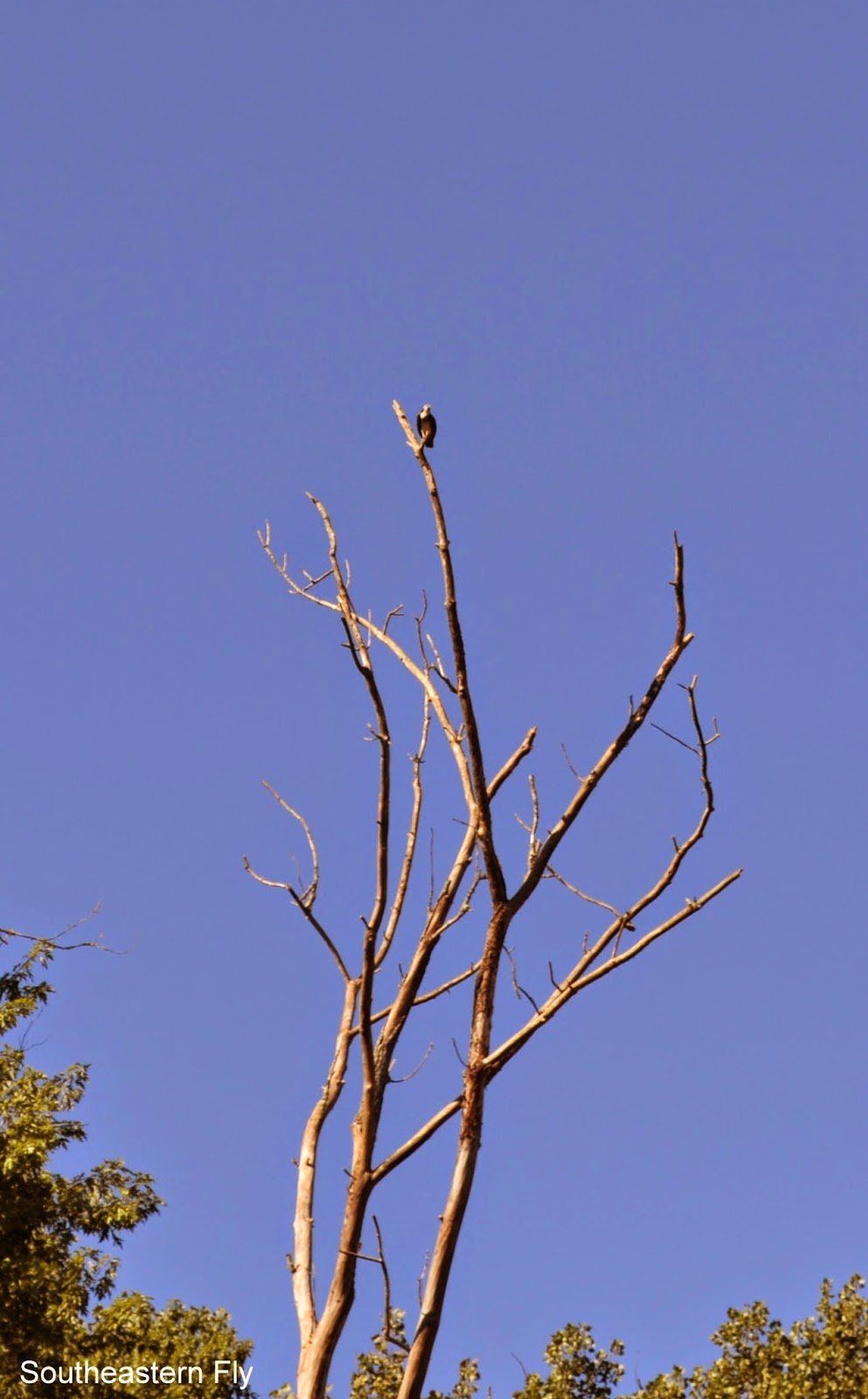 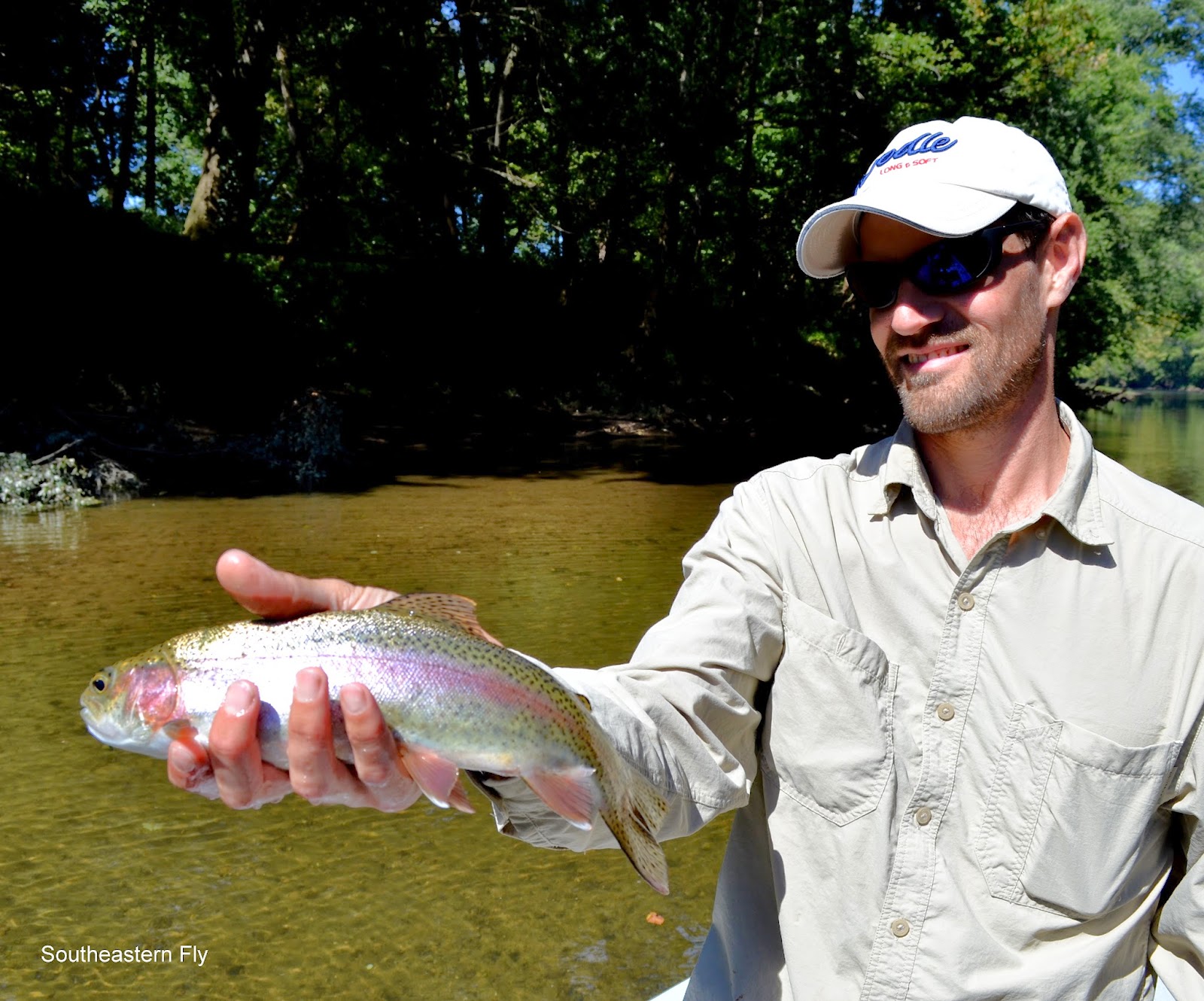 The fish were responding well, we were getting good drifts and good hooksets, so the plan was coming around. Some places on the river are my favorite. We drifted into a run where I have seen countless anglers lose fish, including myself. We slowed down and tried  to have everything just right. On this day we slipped in the run and began our trip down the edge. Alan dropped the bug in a slot and threw a mend just right. We slowed down the drift and the boat and a nice fish flashed, then Alan set. All I have to say is we boated that fish! 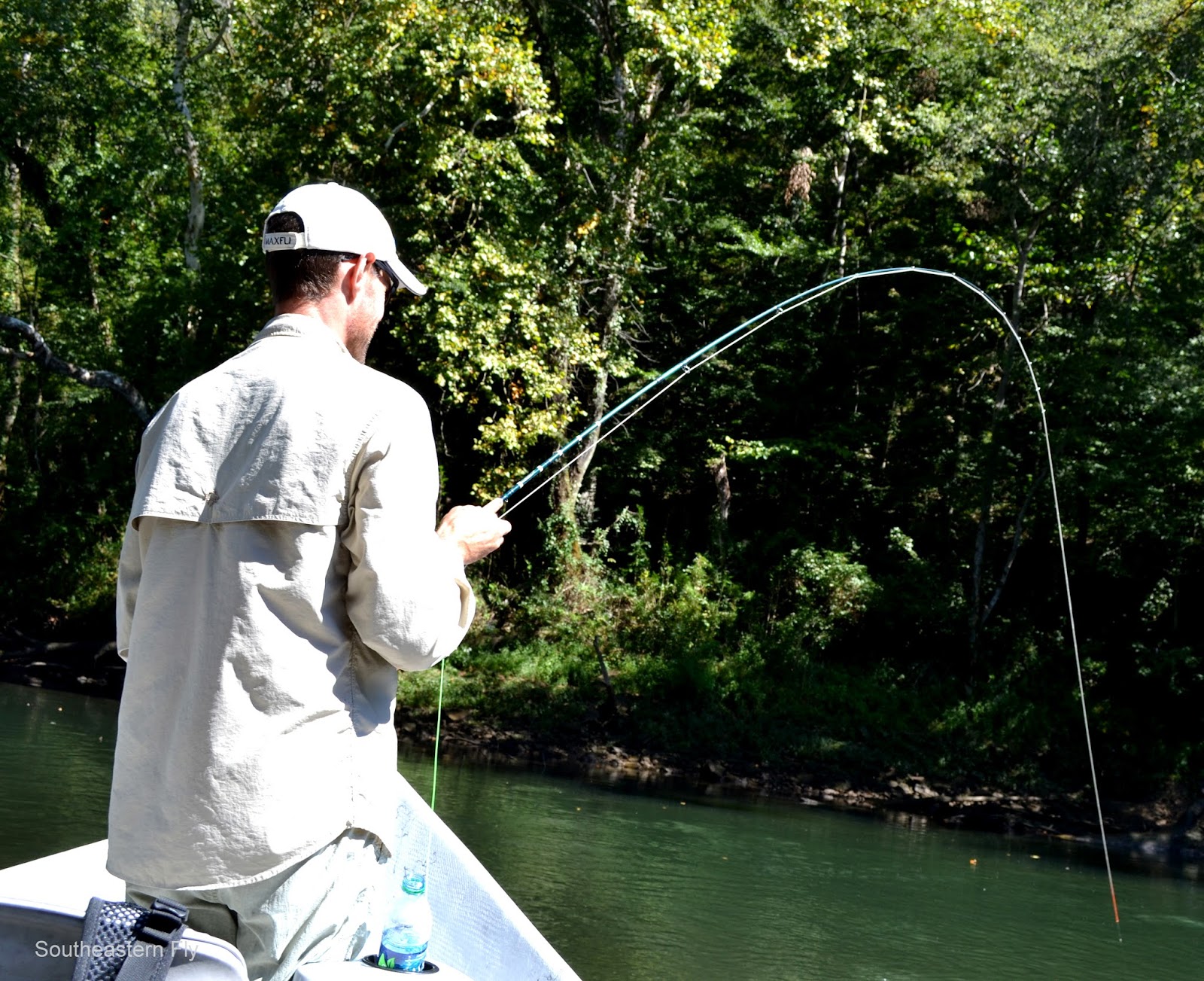 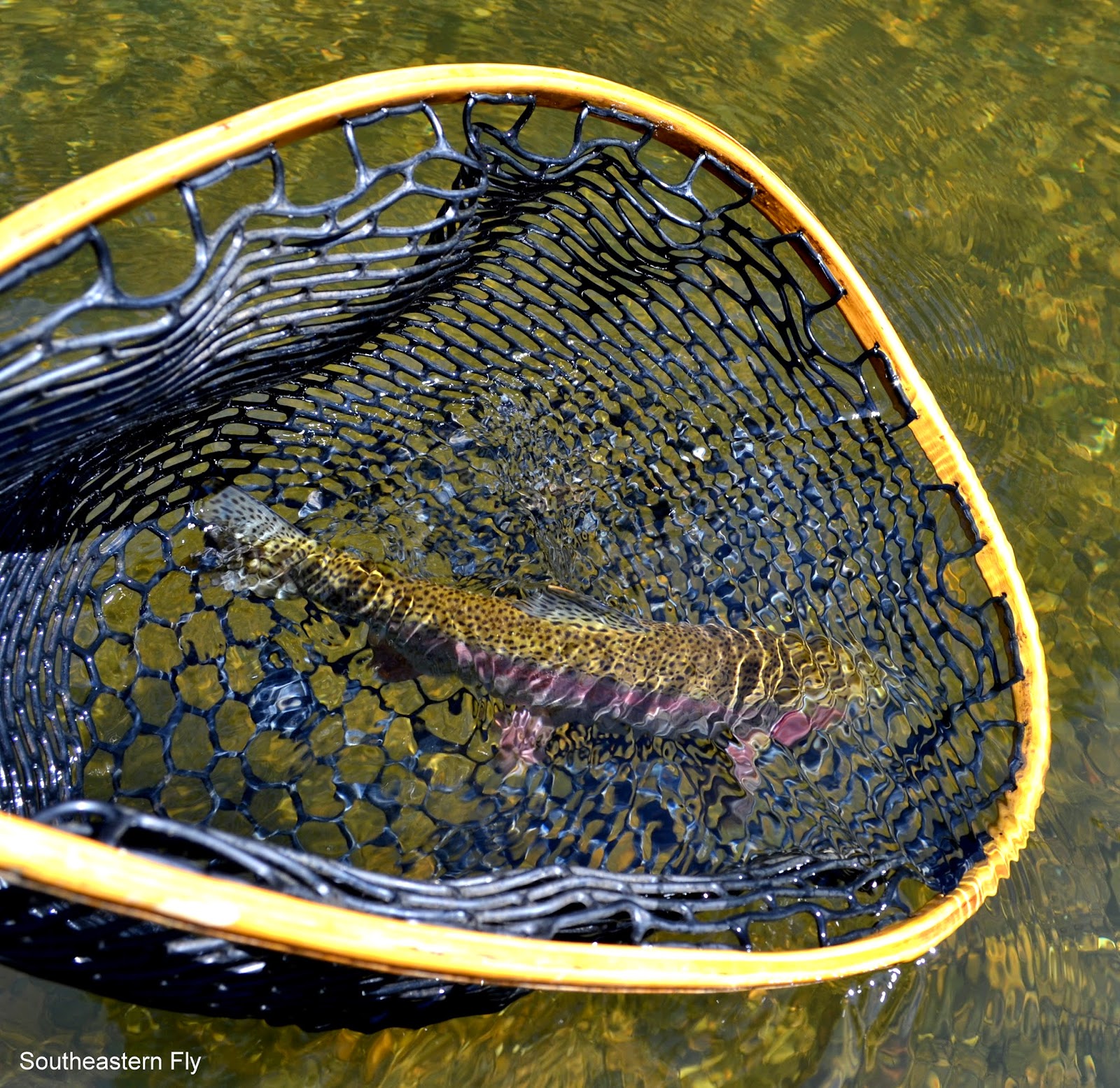 We would repeat this routine over the next couple hours. Every good spot in the river would produce a strong pulling rainbow. The browns must have ate their meals before we arrived and were not hungry, but the bows really filled in those gaps. We stopped for lunch in the shade and set up the table in the middle of the drifter. This was something I have done a couple times and it speeds up our lunch to give more time with flies in the water. 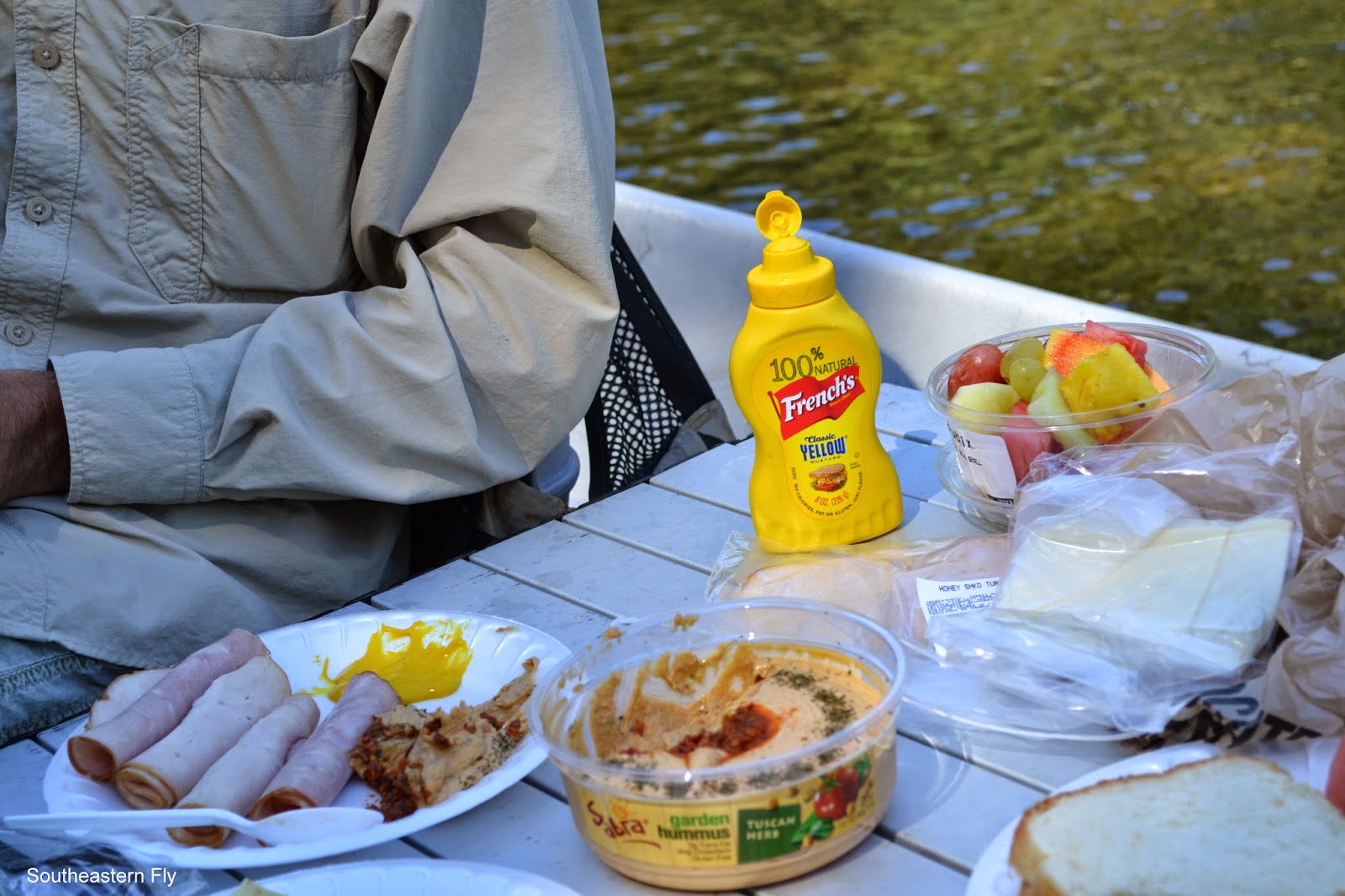 After lunch we rowed into one of the last good runs of the day. Alan was set up to pull a fish from the head of the run in a hole about the size of a garbage can lid. He got the fly in early, the fly settled an then floated into the hole. The fish ate right away and the rod raised then the line came tight. We got that fish to the net and we went right back to the hole which again produced the same result. Then we went back for the 3rd time and were boating another fish before the end of that drift. It is a small hole, but one I can never pass up again. 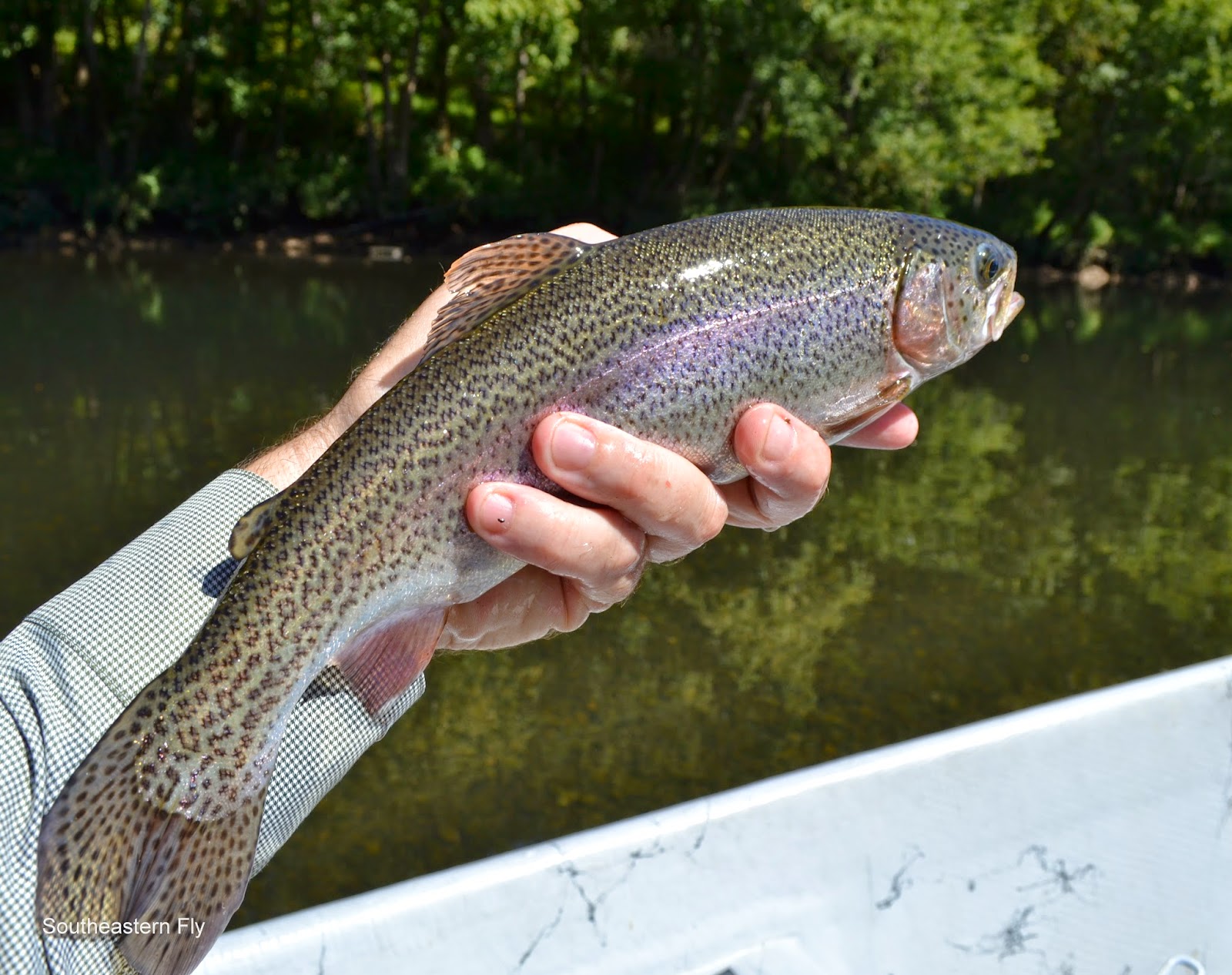 We finished our day on streamers to prime Alan for his next day of warmwatert fishing. It was one of the better days of fishing over the past several floats. The wildlife, the responding fish and a good meal with a very good angler. The last time I saw Alan he was driving toward I-65 for his next stop on his Fall trip to the southern states. 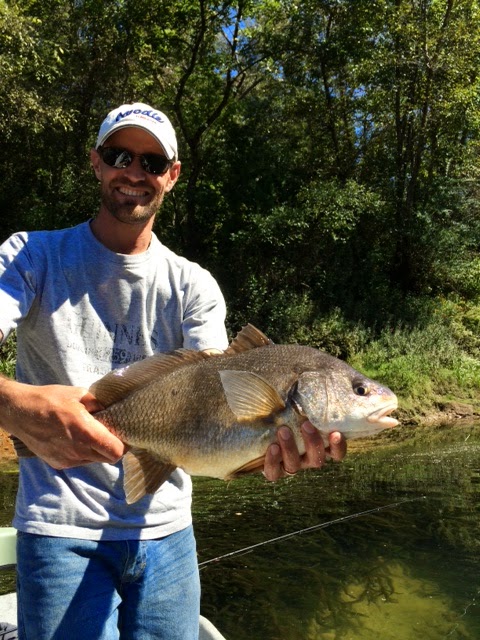