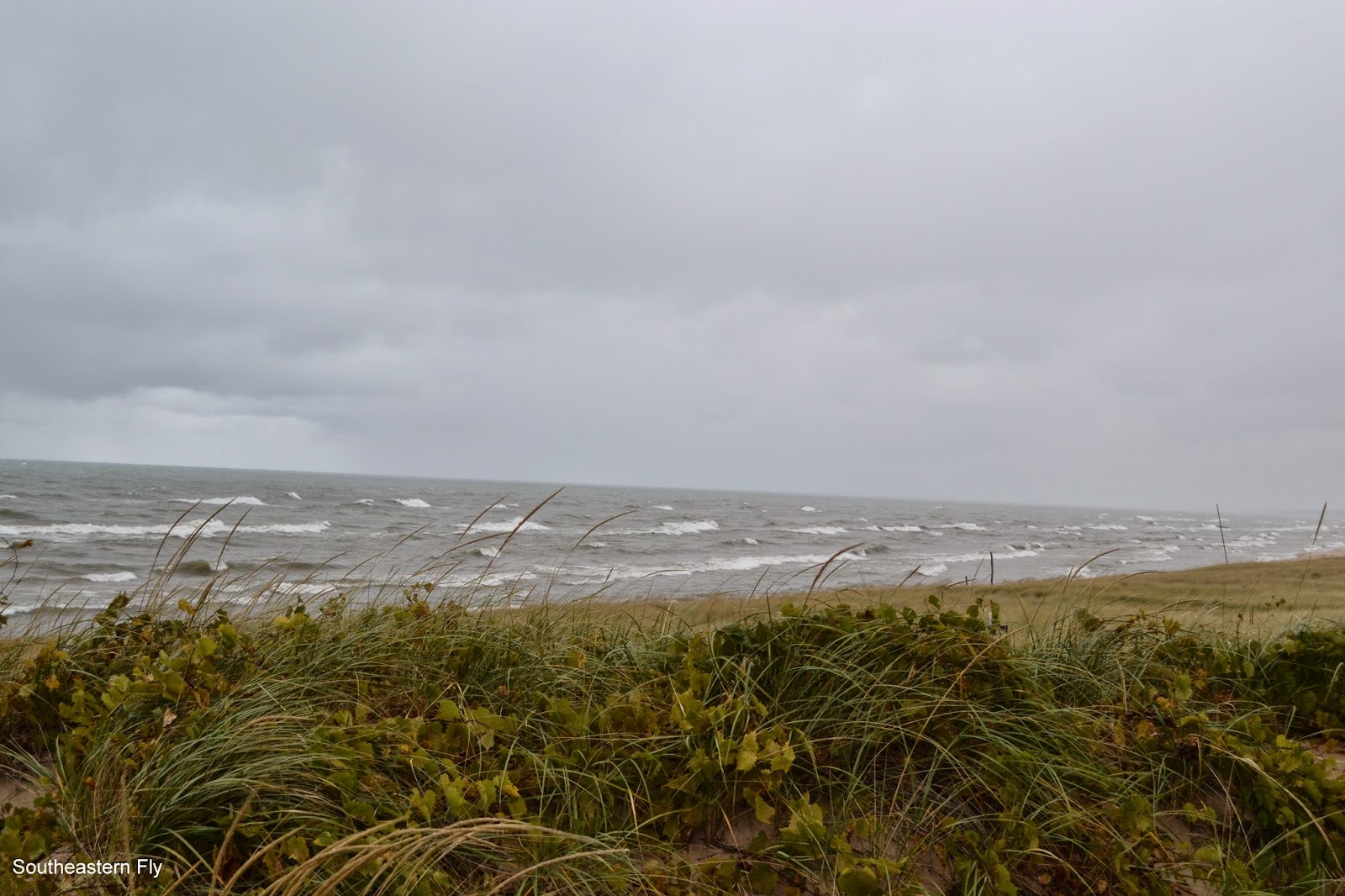 The Plans Are Made- In June, while we were in Florida, I got my kitchen pass the decision was made to book a trip for the Fall salmon run in Michigan.  So I called Anthony, and the guide, then booked a couple cabins. Our trip was set for October. Last week we headed North for Michigan with fly rods and high hopes. On the drive up we ran into the first snow flurries of the year around the Kokomo area. But in the long run we picked the perfect driving day, which saved two fantastic weather days for fishing. 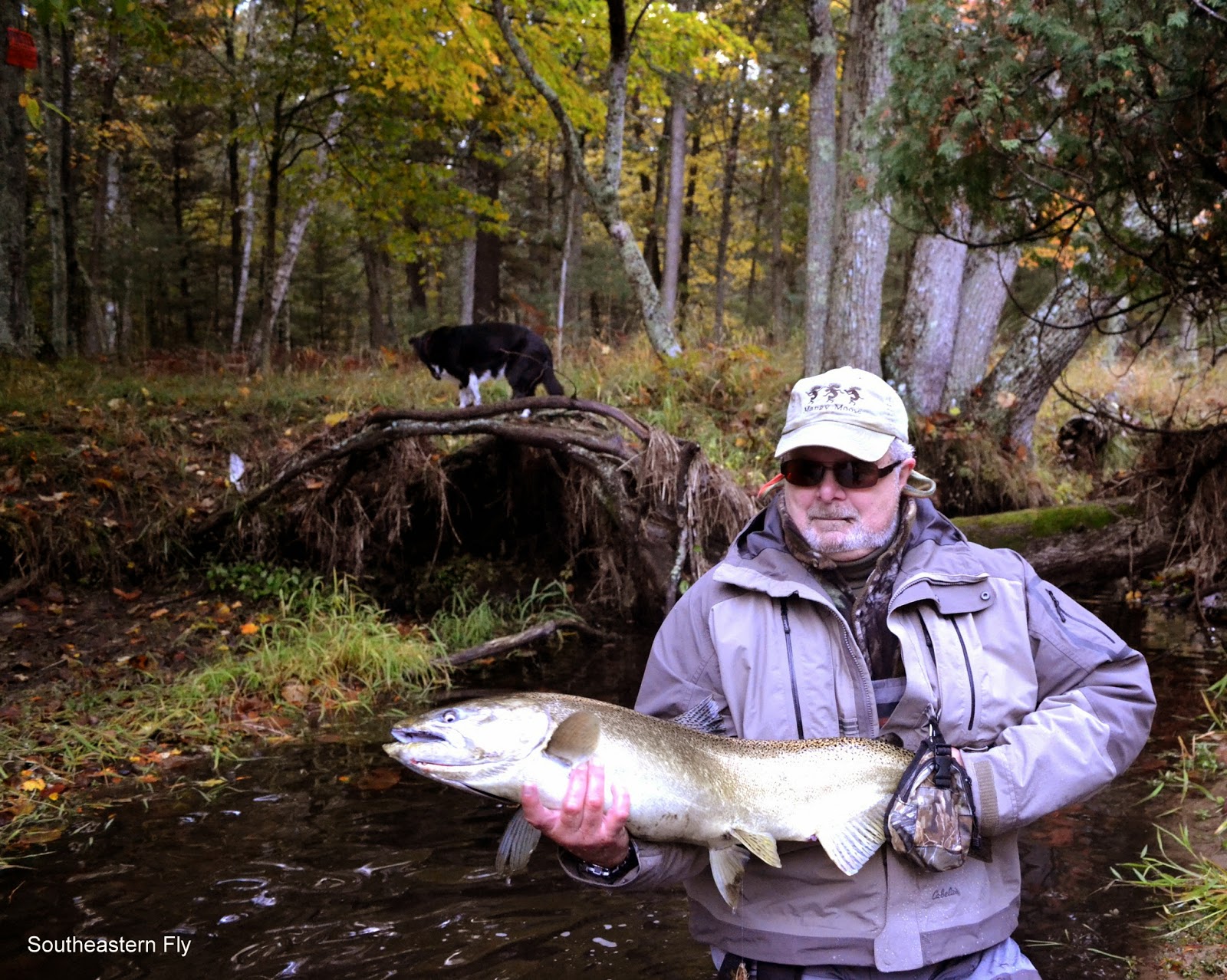 The Salmon Whisperer- My plan was to just keep guiding here in Tennessee and not worry too much about the trip until a couple days before we left. Anthony is a bit more thorough and learned as much as he could about salmon fishing prior to the trip.  We stopped in the fly shop for our Michigan license and Anthony asked about the water level. With the heavy rain throughout our travel day the river was on the rise. I have to say Anthony was dead-on when he predicted the rain would raise the river level and get the fish moving. The next day fish were moving and with his prediction Anthony became the Salmon Whisperer, at least for this trip anyway. To top off his prediction he also brought the first salmon to the net. 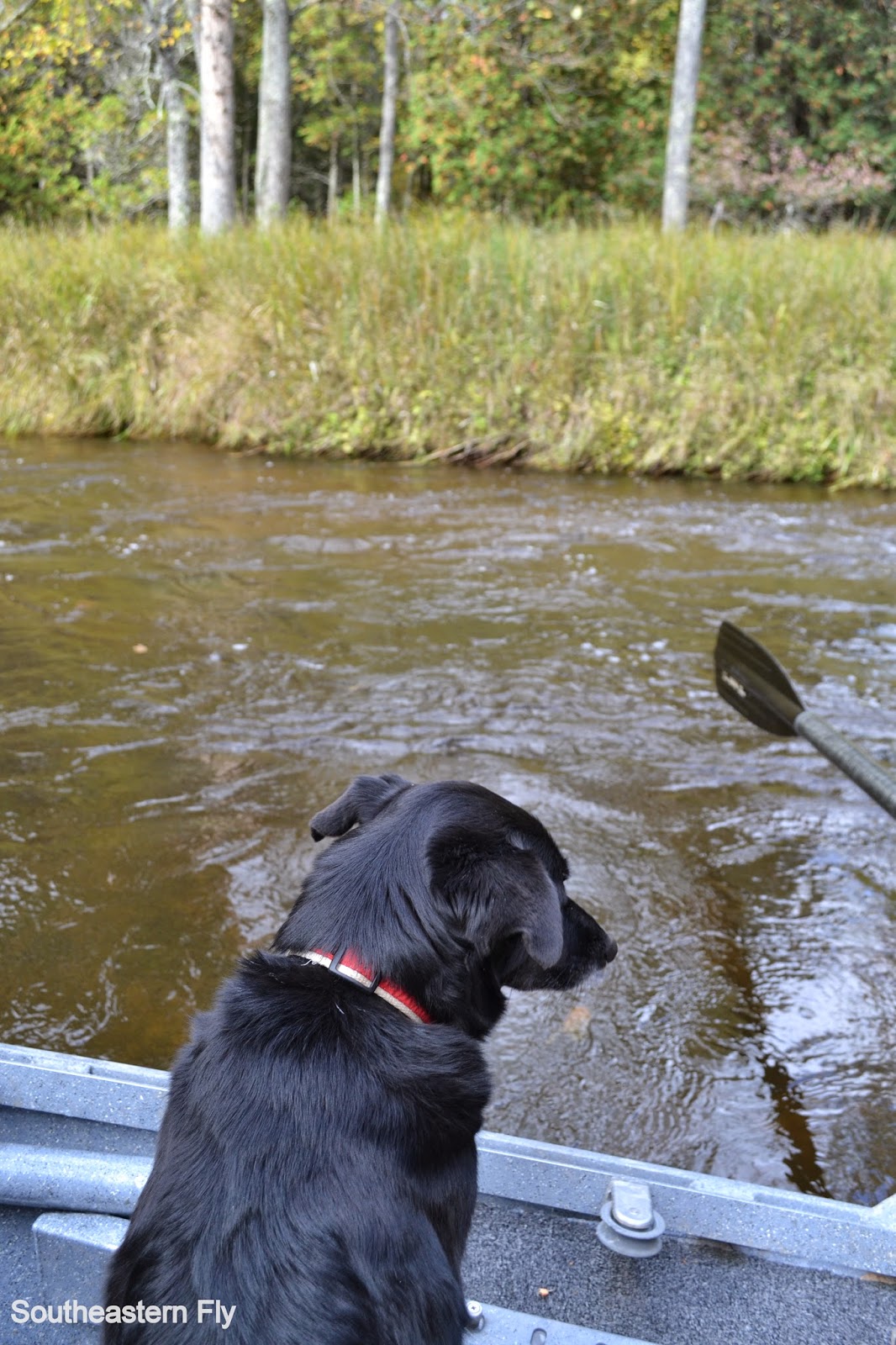 Fishing Dogs- It has been said there is no such thing as a fishing dog. I have never thought much about a fishing dog until this trip. Dan, our guide, brought along his dog Sage. Or maybe I should say Sage brought along the guide. Either way Sage was a welcomed addition to the boat on both days of our trip. When the boat would stop Sage was out and on the bank to chase squirrels and do whatever dogs do in the north woods on a Fall day. When it was time to make a move Sage would show up just before the anchor was raised and would take her post on the downstream side of the boat. 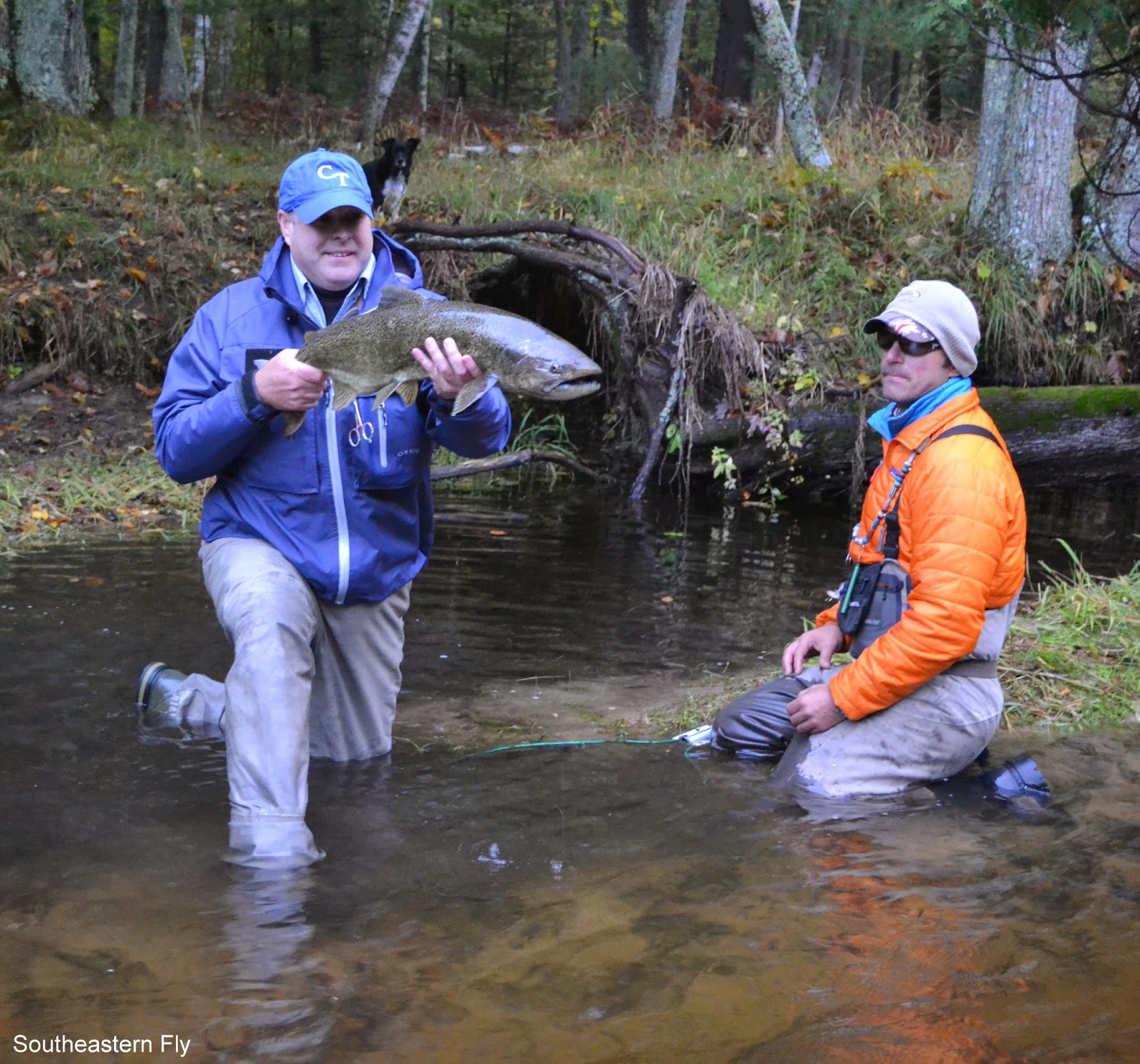 That First Salmon- The river is crowded during salmon season so we left the cabins at 5:00 a.m. EST. That's 4:00 a.m. CST, which isn't too bad for me, but for some it was early. We launched Dan's Hyde on zero daylight. Then headed straight to the best part of the river and arrived to claim our stretch before most anglers even thought about their alarms. This move paid off and Dan's plan came together early.

So we were up early which gave us the best spot on the river and within a few casts Anthony had a fish in the net, then a few minutes later I was motioning for Dan to bring the net. The first fish was pretty easy to fight because the adrenaline was flowing and weeks of anticipation built up for a great fight. But, later in the day after a good number for fish, several doubles and seeing the backing a fair number of times the same fight was a bit of struggle because of a sore forearm and shoulder...and that was a good problem to have. 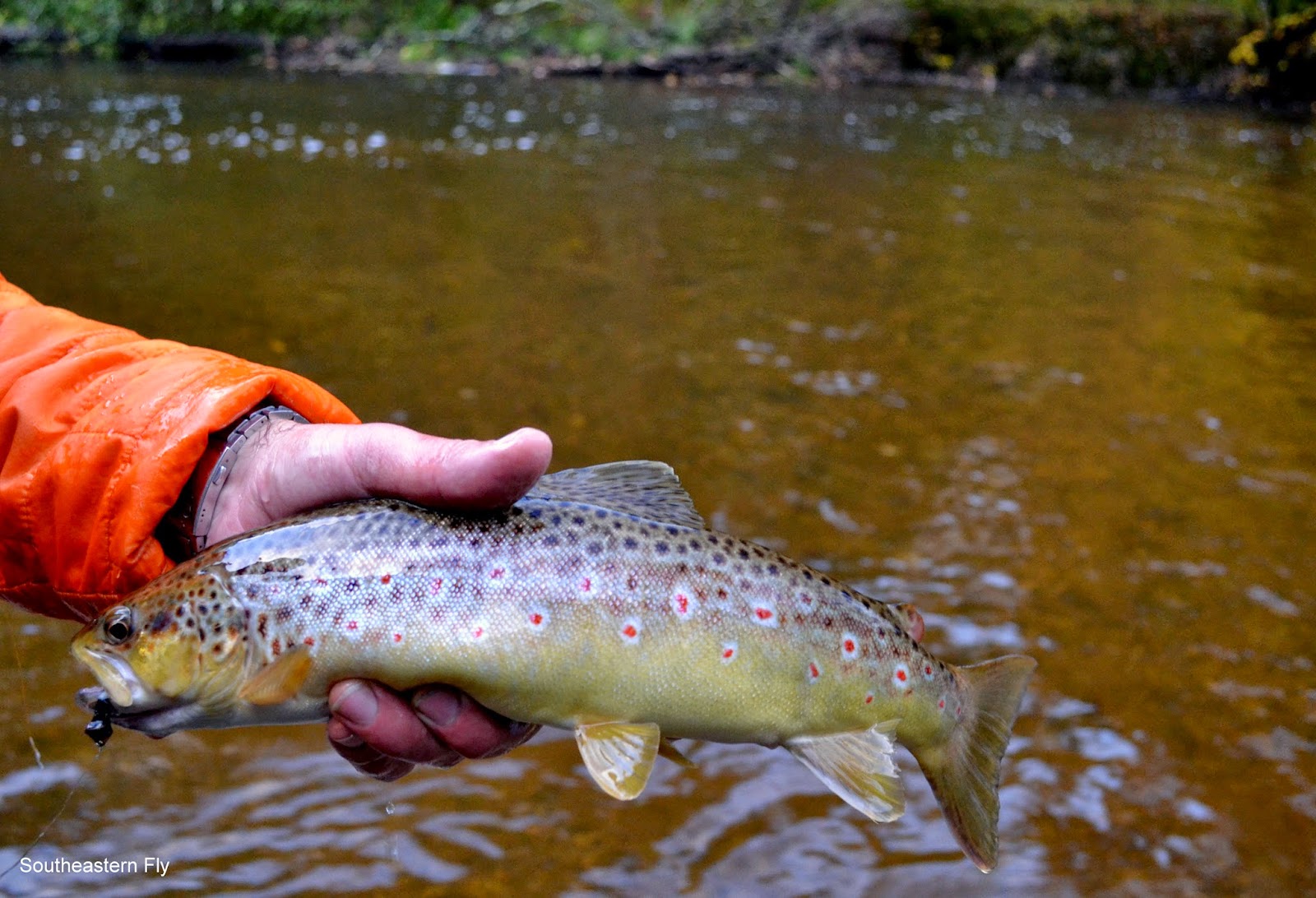 Salmon Weren't the Only Fish-  After the several salmon it was a welcomed change to find a nice brown or two on the line. The browns, salmon and some small steelies were occupying the hole I was fishing, so the variety was a bonus and to tell the truth it was nice to get something different on the line even if salmon was the initial reason we came to Michigan. 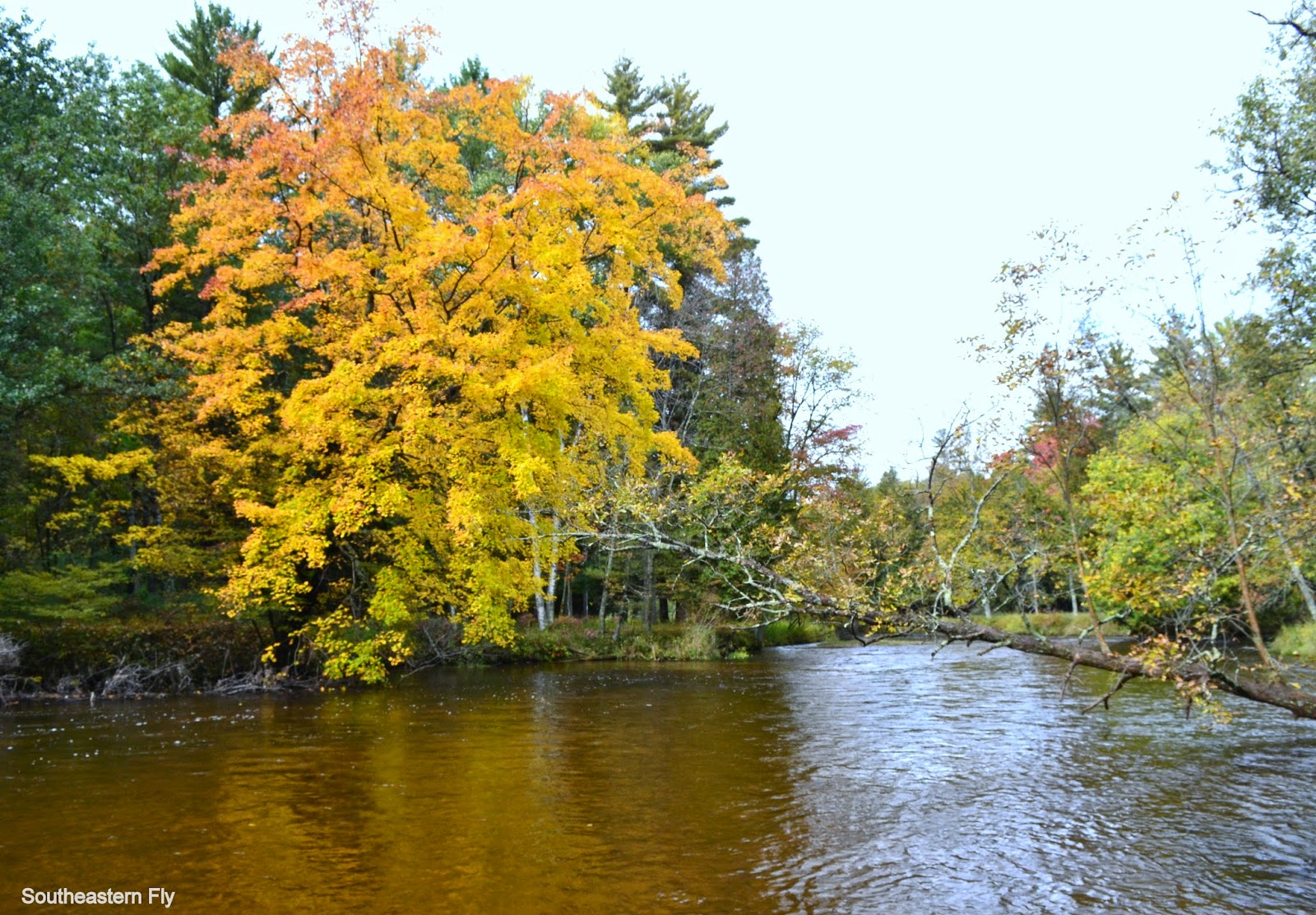 Fall Color- The Fall colors were out along the river. The next couple weeks may be better but we hit the colors just about right. Maples, Oaks and Birch trees were bringing the color on this trip and were fortunate to be able to make "Leaf Peeping" part of our trip. 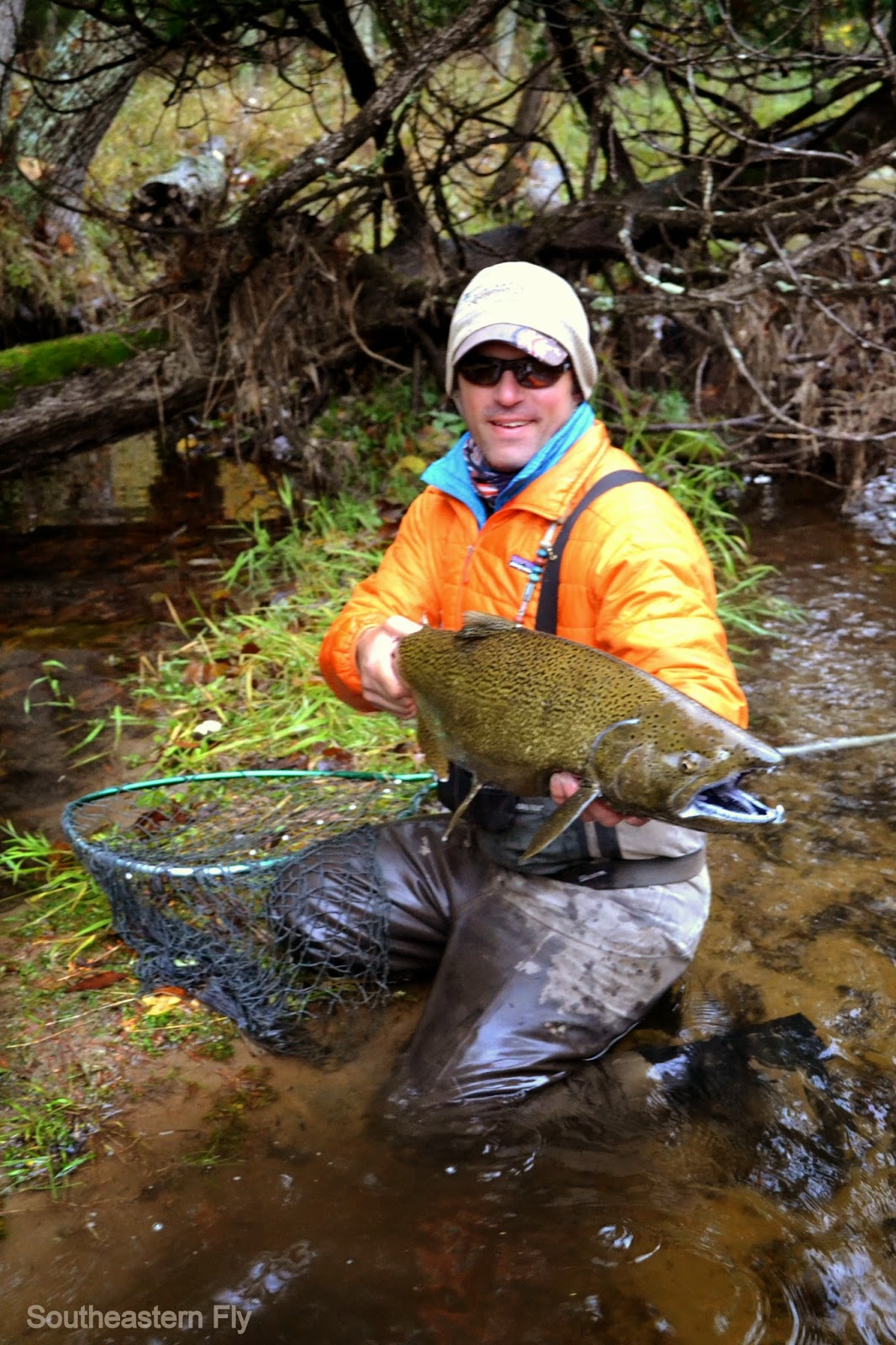 Good Guides- In Michigan, on this river at least, anglers don't float and fish. Anglers will find a spot in the river and tie it up for most of the day if it is a worthy beat. Guides can't always have the perfect plan, but I have to say Dan had about as good a plan as anyone could have hoped.  We beat the rest of guides and anglers to the best spot. When the sun came up we claimed our beat and began catching fish. There were a couple more groups who had a good day, but there were also some long faces in some of the other boats. One boat floated into our beat while Anthony and I had one of our many doubles. It is hard to conceal your spot and frankly the grin, when both fly rods are bent double and 25" + fish are rolling and jumping, but we did our best. 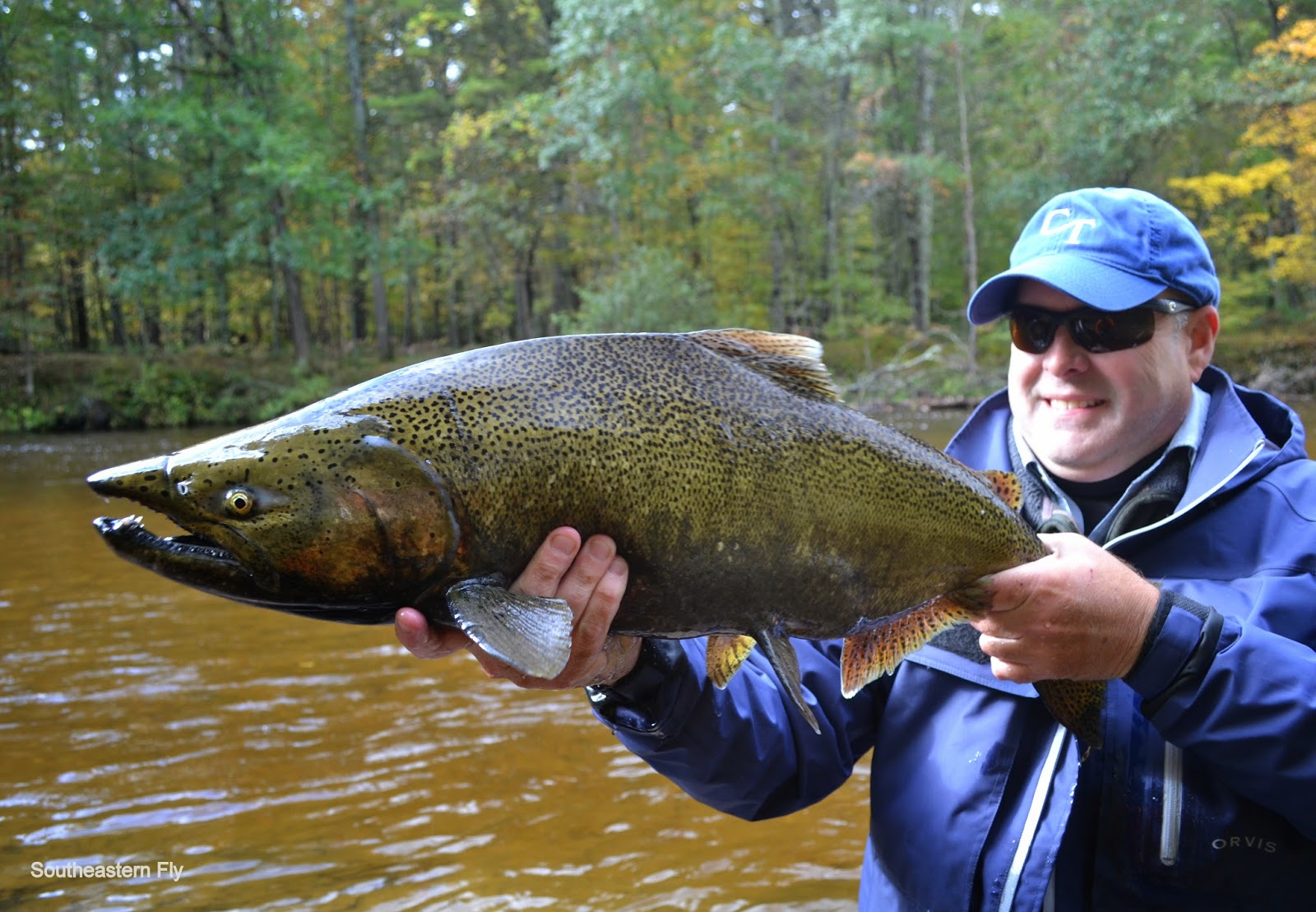 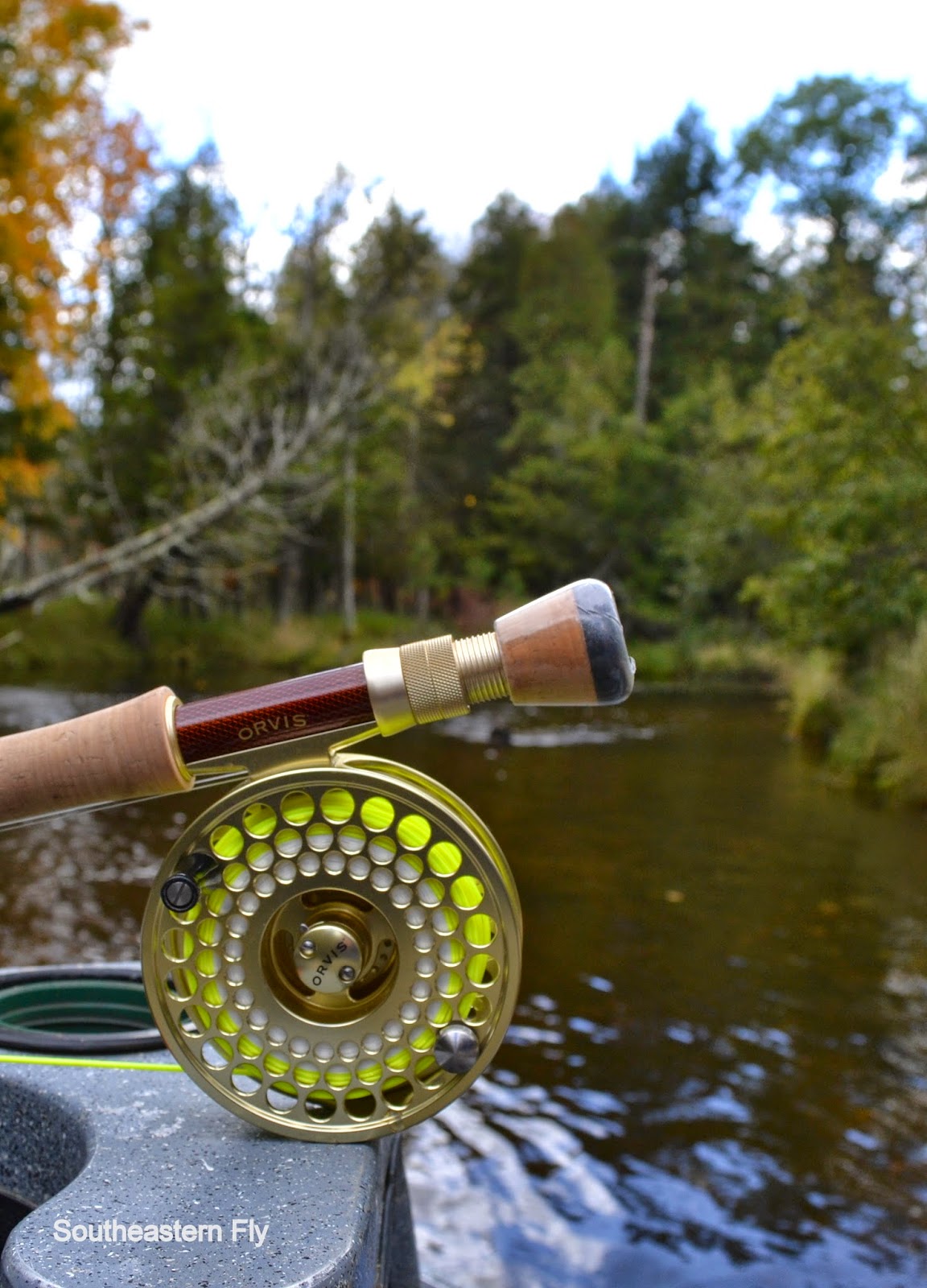 Lunchtime- Seeing smoke from the grill was a welcomed sight. Pork chops and all the accoutrements really hit the right spot and at just the right time. After a short rest and good discussion, soon we were lobbing those indicator rigs at salmon with the same positive results. 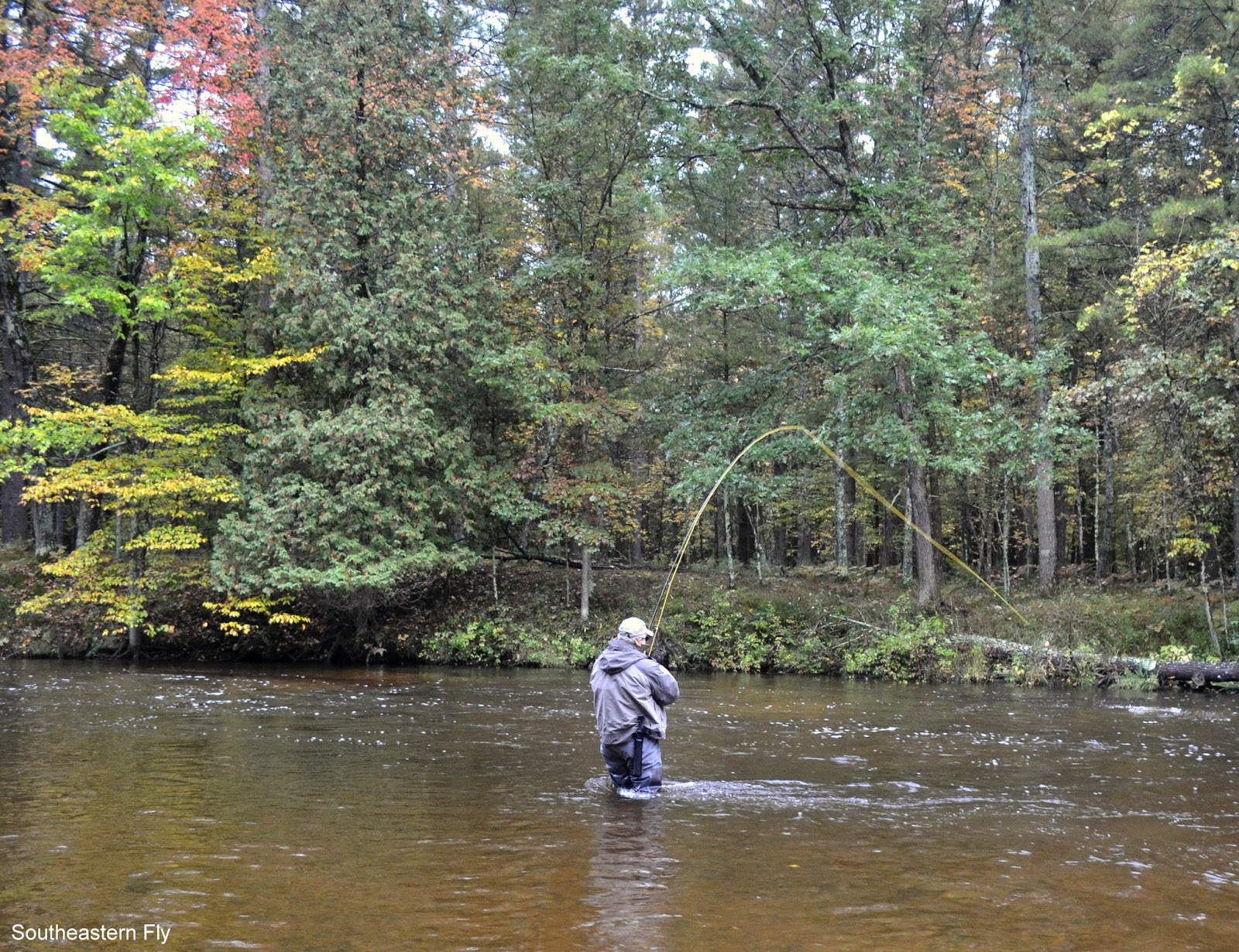 Equipment- So what does it take for these fish? I took along a couple of our musky rods. The primary set up was an Orvis Access 10 weight with floating line. The leader was about 12' down to a heavy weight and then another 4'-6' of heavy tippet. The rig was difficult at first to roll cast, but as the first day wore on and once our timing dialed-in it wasn't as hard. 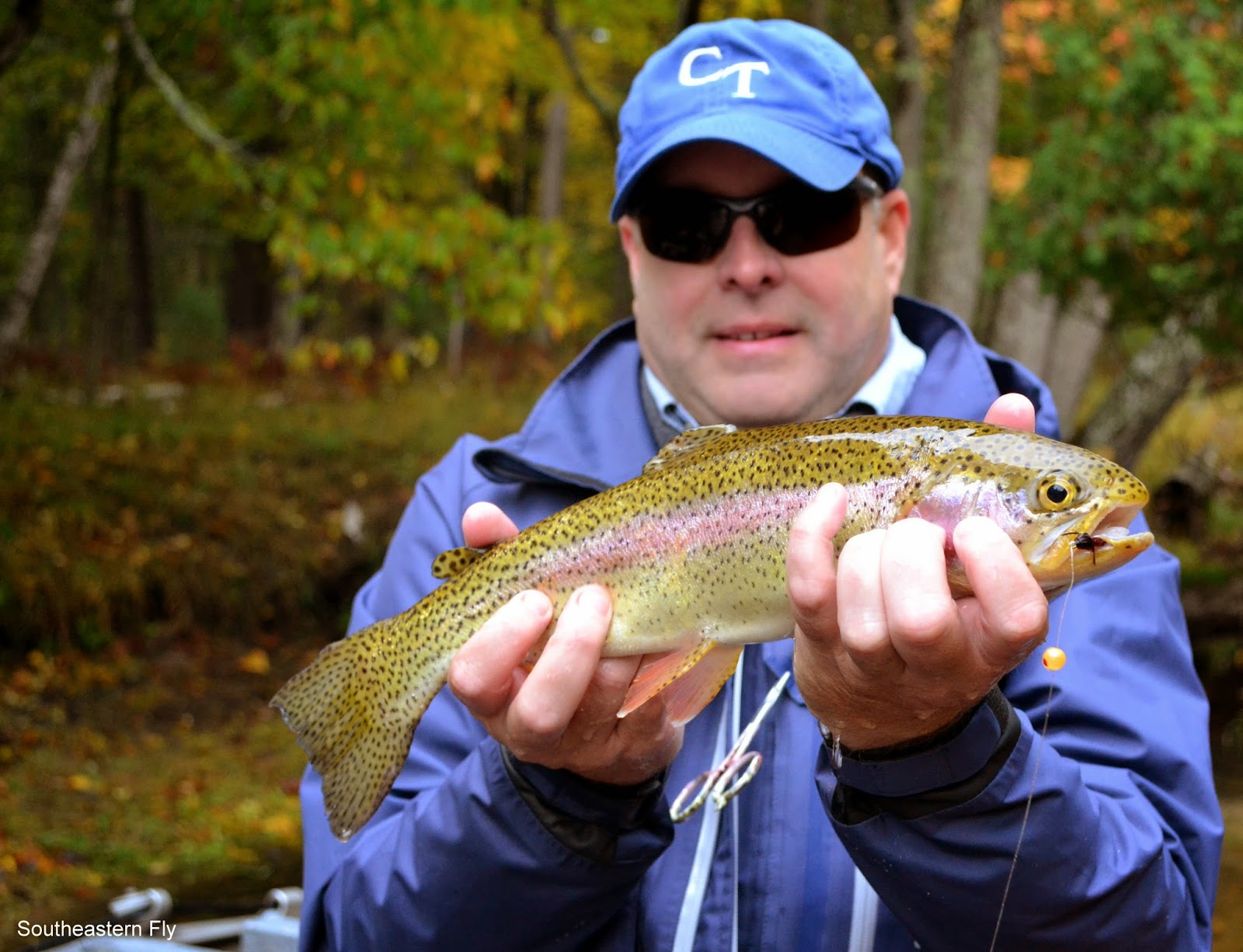 Next Year- It has been said confirmation of a good trip is planning the next trip on the ride home.  Our confirmation began at the end of the first day when we stopped by a local eatery for some fresh walleye. Next year it looks like another trip to Michigan is in the works. The trip will be limited to 6 anglers and will include two days guided fishing as well as lodging. For anyone interested just give me a call or send an email and we will can discuss the preliminary details. So that was day one and over dinner we began to discuss our day two plans which would move us off the salmon and on some different water with a slightly different prey. Check back for the recap of day two. 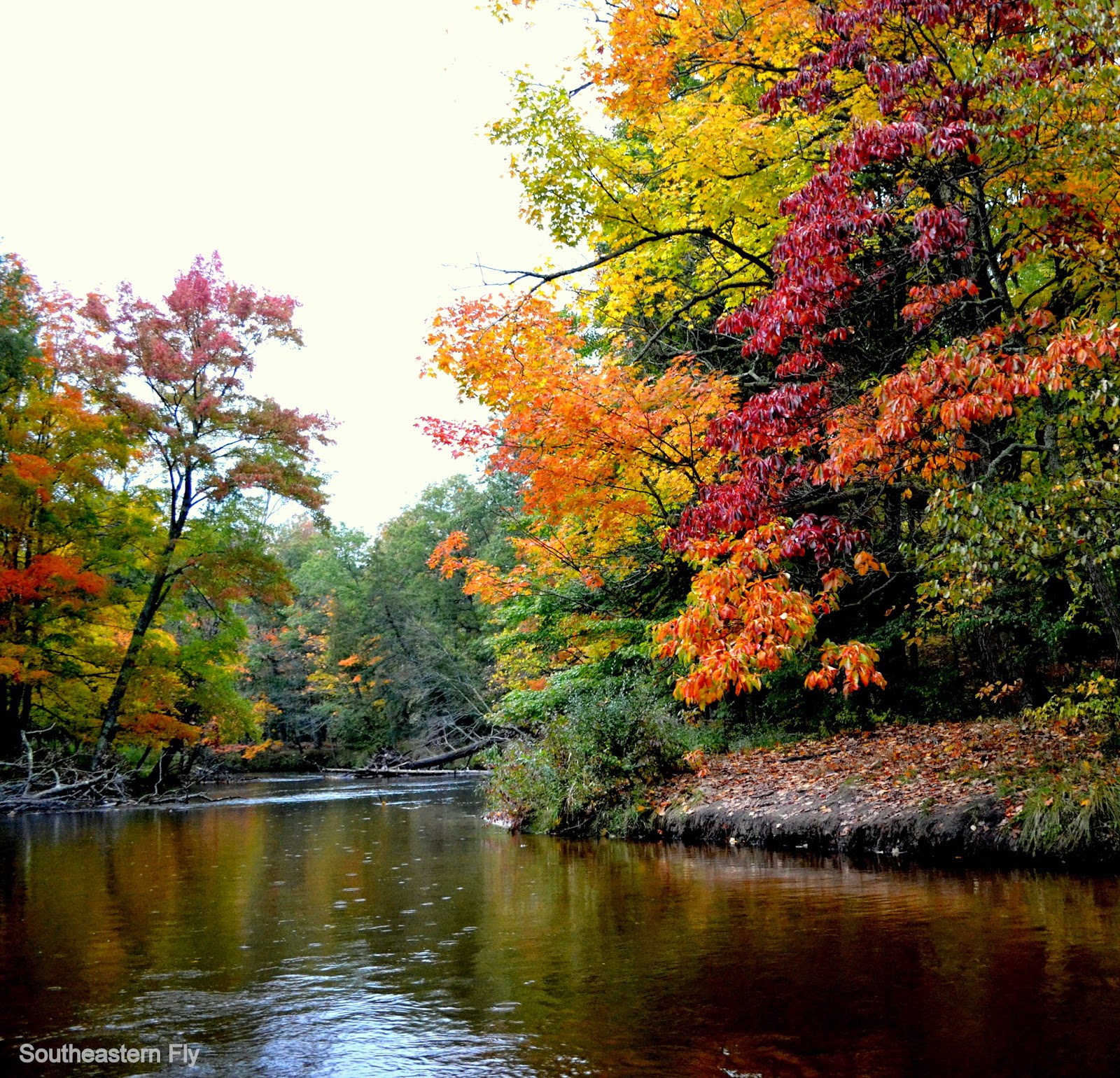