Bill and B.T. Make It Back to the River 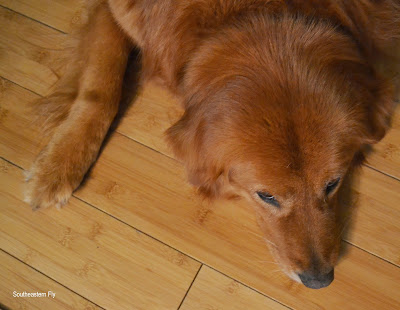 A day on the river starts with getting those last minute details together, grab some breakfast, and don't forget to feed the dogs. The dogs do their part by laying right in the way while giving their best "don't forget to feed me look". But, after a while everything seems to fall in place and the rig is on the way to the river. 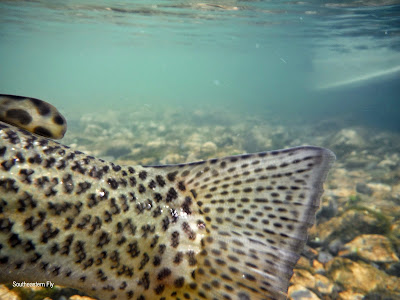 On this day Bill and B.T. joined me. They were on the boat last Fall and had a nice day fishing nymphs and terrestrials. This trip we were on all nymphs. There were a few dry fly opportunities early in the float, but to be honest once we shoved off the action started and didn't slow long enough to warrant a change. 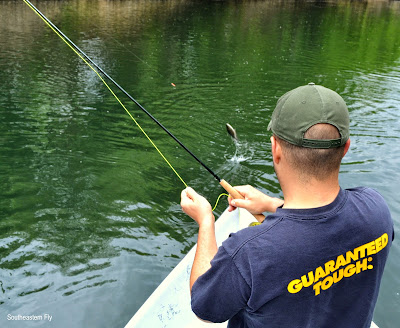 Bill struck the first fish and began moving the fish count. B.T. came on and got himself on the quality catches. It was all smiles on the F/V Southeastern Fly with good fishing and good conversation. We moved toward water where the fish are a little bigger and getting them to the net takes a bit longer. B.T. kept his quality streak alive with the best brown of the day. 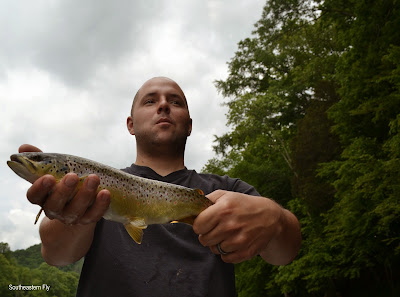 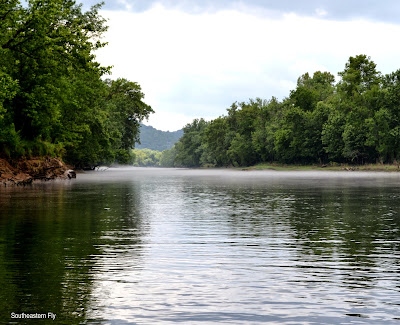 It wouldn't be too long before the rains came and we would have to stow the cameras and other valuables. The catching continued as the showers cranked up and then slacked off. We came to another high-value area. The water flows across a long shoal, then drops off into a nice pool. We set Bill up to place his nymph onto the drop-off where the fish were supposed to be feeding. Bill put the fly in the zone and as the drop-off began to slope, Bill's nymph began its lonely fall. The fish took the fly as the fly bottomed out on the tippet and Bill set the hook. After a couple hard but short runs the fish turned and made a charge toward Bill. Bill thought for a moment the fish was off, but after some convincing he kept the fight and moved the fish toward better water. The fish didn't give up until the very end and Bill slid the fish into the net. 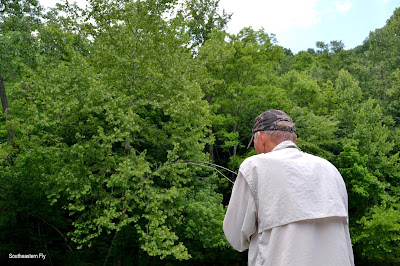 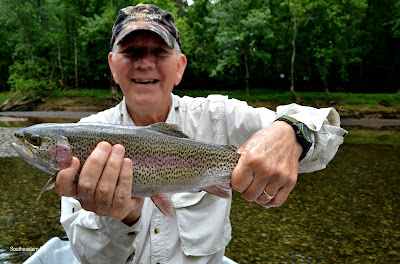 B.T. wasn't about to be outdone. We were on what was to be the last leg of the trip and the storms were just over the hill. B.T. dropped his fly into a particular fishy-looking part of the river. The fish took his nymph and made several blistering runs. He stayed in front of the fish as the fish made laps around the boat. B.T. used the skills he had been working on throughout the day and got the fish coming his way. One last run, then another. B.T. brought the head up and we moved the fish into the net. 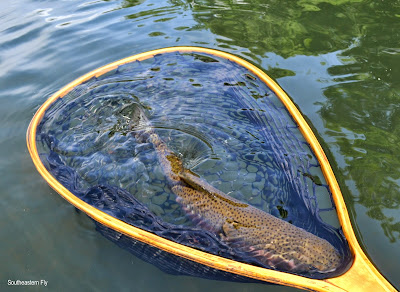 It wasn't long after that we were fishing "the Unknown Shoal" where faster water moves across the gravel and small pockets. We kept banging the nymphs across that shoal and eventually into slightly deeper water. The fish were there waiting to ambush food coming off the shoal and B.T.'s nymph blended in with the other food. The situation, the fight and the techniques were a mirror image of the last rainbow B.T. caught. After several laps around and then under the boat, the rainbow was ready to come to the net. 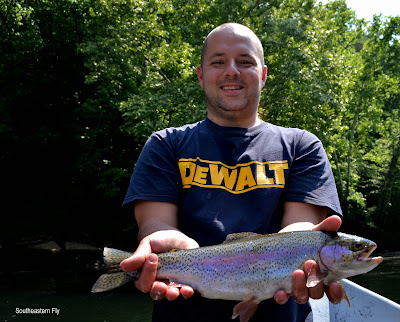 The final hard rain of the float came and with a good number of fish brought to the net we eventually called the day. Bill and B.T. did a very nice job on the river. Everyone seemed to enjoy themselves including the guy on the sticks. We loaded up and said our goodbyes, then headed back home. When I got home and began unloading the boat the dogs were doing their part by laying right in the way while giving their best "don't forget to feed me look".  This one was counted as another good day. Bill I am looking forward to seeing you in August. 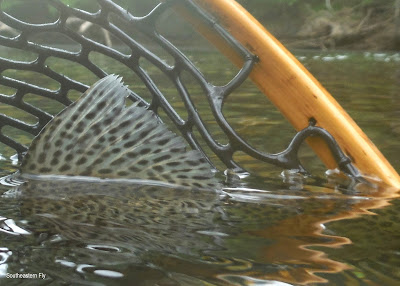