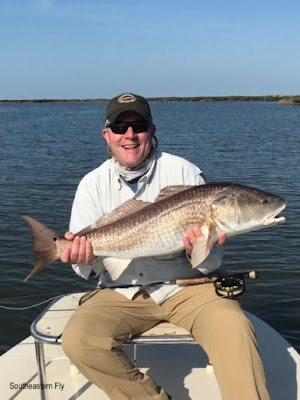 I think the photo above and Mark's smile say it all, at least it explains how good the fishing portion was on this trip. If you have been following Southeastern Fly on Facebook and/or Instagram you already know we spent the best part of the last several days in Louisiana. The food, the accommodations and the fishing were all very good. The adventure, well it was outstanding. 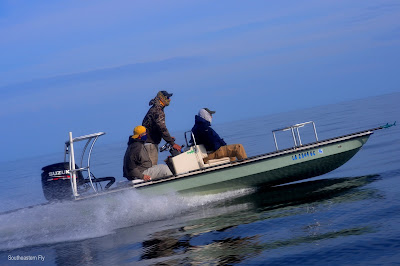 The night we arrived a phone call came from our host guide Cleve and he said we were going to make the trip to the Chandeleur Islands. The boat ride (race) would be about an hour on open water in a 20'ish foot skiff. Once there, we would hope the fishing would be good. Everyone who knows me understands that if there is a chance for adventure, let's just say I'm all for it.

The Chandeleur Islands have long been on my bucket list. Every since my grandfather and uncle went out there on a mother ship and reported how enjoyable it was to be there, I have wanted to go. They fished for several days, while eating good food and taking-in the small strip of sand which is only slightly wider than an interstate in some places.. The stories of fishing for sharks, redfish and trout as well as the rest of their adventure have haunted me since. So Cleve was getting it right and we had not even left the dock. 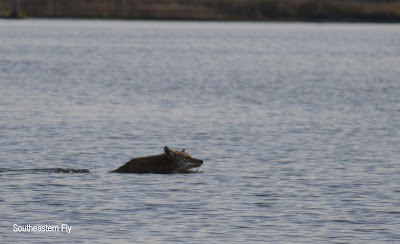 When our two skiffs, two guides and four anglers left the dock we motored out past the no wake zone and got on plane, then we spotted a coyote that for some reason decided it needed to cross the canal. The wildlife was out and on the move. After a couple quick photos we were back on plane for an all out run to that small strip of sand. After a break at the halfway mark we were underway again. The dolphins and ducks, so many ducks were on the move too. Then the small strip of sand came into view and a short time later we had arrived. 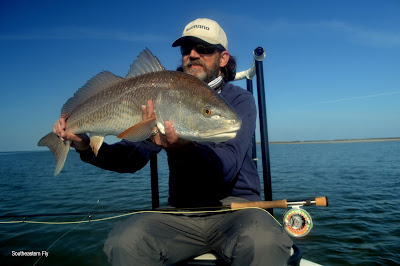 We began with some instruction of do's, dont's, including the finer points of a successful day. It wasn't long before we were in the front brace with a redfish on the end of the fly rod. There were a lot of firsts on this trip and everyone got their first bull red.

The rest of our day was spent chasing big reds with fly rods, eating huge sandwiches and messing about in boats. It was long day of fishing and catching. Then we were making the trip back across open water and into the marsh, then finally back at the dock. Before long we were in the car and on the ferry for our last leg of the day. We wrapped up the day with a buffet at the lodge, while sharing our views of this most enjoyable day. 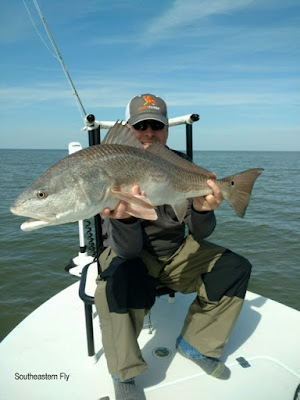 Early to rise and a nice breakfast at the lodge. Lunch was ready and we were off to enjoy day two. The weather on this day two was even better than the first day as a front was approaching. The fish would have their own plan but we would make the most of it. We pulled onto the ferry and our adventure continued. Finally to the dock where the skiffs waited. Once again we were motoring slowly out of the no wake zone. 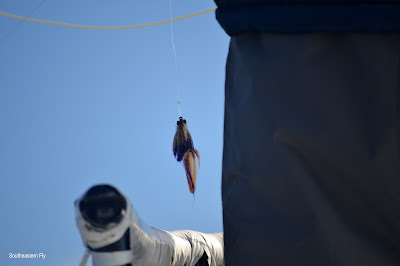 On this day we would explore the marsh for reds. We stopped at the first pond and it wasn't log before Cleve was spotting fish. A fish moved and after two casts we were bringing our first red to the boat. Then it was a long hunt for more fish. We would go for a lengthy dry-spell with several blown shots and nothing to show. The sun was falling and the shadows were getting long. There was one last place, the last stop on the tour and the hope of at least one last fish... 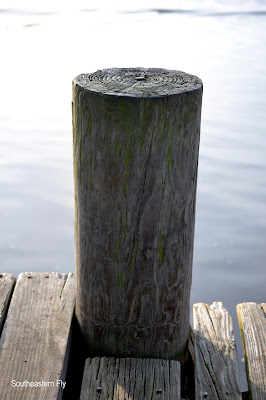 We raced along the canals, through larger ponds and into openings. The skiff stayed on plane for quite a while. Then we pulled up to a bank that looked just like every other bank. Cleve had an idea that the fish might be here on this higher tide.  So with Cleve on the poling platform and an occupied casting brace we went to work.  A few strips in this position and a red bumped the fly. On the next strip the fish ate. A quick strip-set and the fight was on. The fish made several runs and then came to the boat. We would pulled three fish out of this small hole that was no bigger than the skiff from which we fished. And this hole looked just like any number of other holes along the marsh. This spot was special and we fished it until the light was just too low for effective fishing. 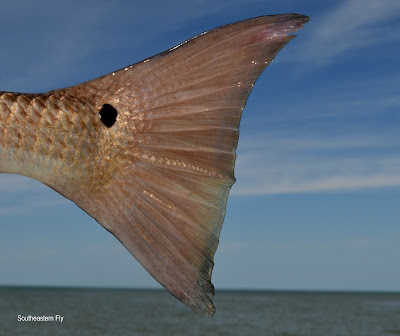 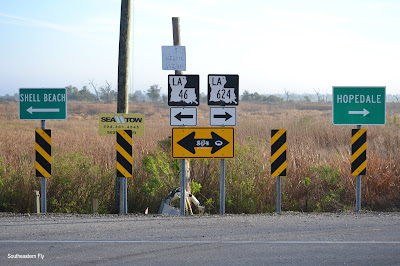 The most photographed intersection in red fishing 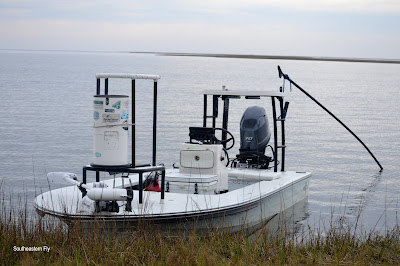 The mosquitoes were absolutely the worst I have ever seen. Worse than the backwaters of the Mississippi River, worse than the backwaters of Apalachicola Bay, worse than, well you get the picture. In this marsh they would cover every surface and could eat their way through four layers of clothing if provoked. The low light and high mosquito count finished our day. We reeled up the line and soon we were on plane again for that long ride back to the dock. 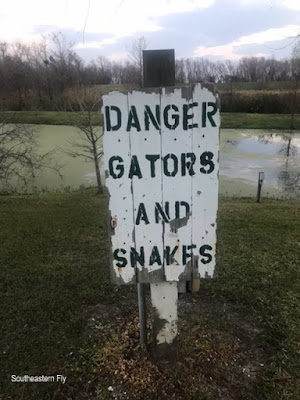 We raced through the canals and finally the skiff decelerated into the no wake zone. Our sister skiff and its occupants waited at the dock. The boats were trailered and we all said our goodbyes. Soon we were on the road back to the lodge. The distance was 45 miles and included an hour of driving as well as a ferry ride. We arrived for the final dinner on this trip. We would be the last group to dinner, but when we walked in there were some freshly shucked oysters waiting. Then the five courses began coming to the table. We ended the evening with a review of each angler's day. Then it was time to get back to the rooms and prepare for the ride home. 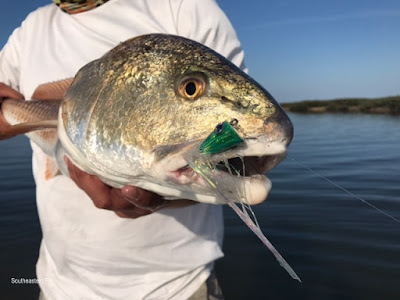 The ride back to Tennessee provided plenty of time to plan the next adventure. It looks like there will be another trip back to the redfish grounds. This trip was an excellent way to see what might work for a larger party with more anglers, more skiffs and of course more food. Stay tuned as future trip details are worked out. 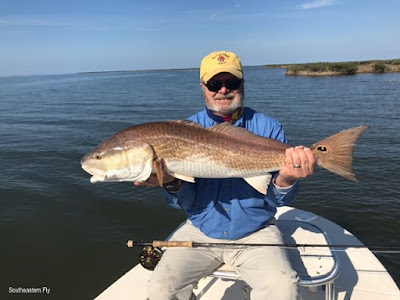 Until those details are worked-out, the tailwater schedules are looking better here in Tennessee. So it is time to get back in the rower's seat and back to the oars. If you are on the "will call" list and haven't been contacted, please shoot me a text, email or phone call. The fish are eating good on local tailwaters and there are some open dates. So, for now it is time to tie some flies and get ready for some upcoming trips to the river. If you want to get out please contact me and let's get a date on the calendar. And finally thanks for stopping by the fishing report 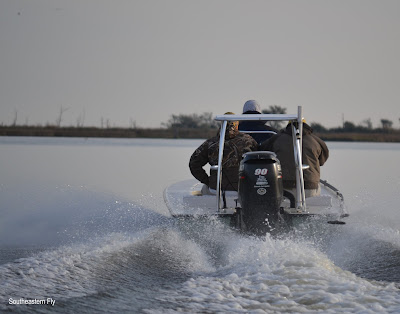