Phillip and Ed- Like Shooting Fish in a Barrel at Times 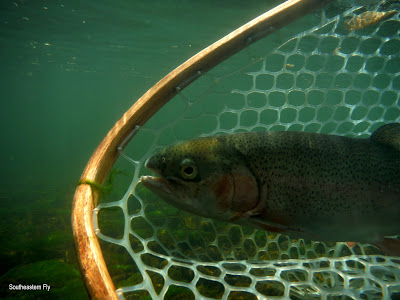 Disclaimer- No, we really didn't shoot any fish in a barrel or otherwise... and no none of us have ever shot fish.

We did, however, catch enough fish that it seemed like they were just going to jump in the net, if we held the net beside the boat. The plan was to float the river and perhaps catch a few fish. The day started out with just the right weather. Shorts were fine as the sun warmed the bones and brought the fish out to join our quest. We were still sitting at anchor, talking and rigging rods when Phillip brought the first brown to the net. I threaten to call it a day and go get the truck and trailer...sometimes catching a fish that quick puts a damper on the rest of the float. But, soon there was another fish coming to the net and then made sense just to get the float underway. 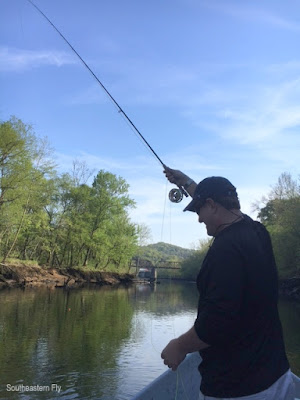 The float started out on a positive note and for a while continued to get better. We made several stops along the way where we caught fish using several different techniques. Most anglers who fish the river know that streamers have been working well. We went to some meatier patterns and the fish responded kindly. 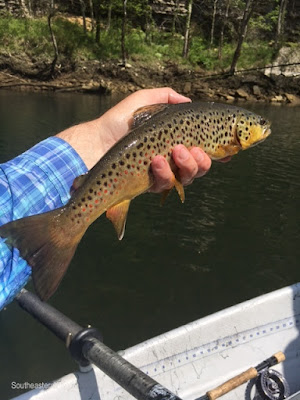 The guys were busy all morning and were bringing all sizes of fish to the boat. Several doubles and even a triple happened a couple of times. The average size was in the 13" - 15" range but as with all good floats, the best was yet to come. 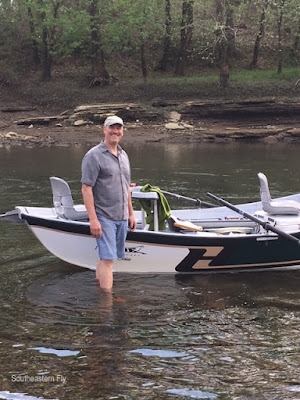 After lunch we were back on nymphs and the guys were getting good drifts. There were some longer dry spells in the catching department, but there were no complaints as fish would respond with just the right timeing. Ed was in the back of the boat and getting back in his groove after several years of not getting out to fly fish. Phillip has been getting out with some trips to NC, those trips would help him prepare for what was to come. 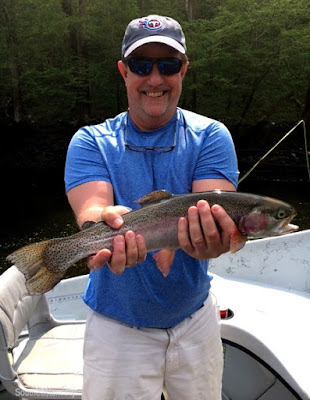 So, here we came floating down the river. The guys were dropping nymphs in the a run by the bank. Phillip lifted the tip of the Orvis Recon and dropped his bug right at the top of the run. The fish must have thought his bug was going to taste real good and decided to try it out. Phillip set the hook and the fish began to fight. Phillip told us it was a big one but Ed didn't believe him OK Ed was the second person in the boat to see the fish and we were soon well into a hard fight from one of the larger rainbows of the day. Phillip did a great job keeping the fish out of the fastest part of the run. All he needed to do was to keep the fish out of that one blowdown and that one blowdown was only a few feet away. Phillip used the backbone of the Recon to steer the fish away from the one safe place and bring it to the net. It wasn't long before we were taking a photo and the measurement.

This fish would be our longest of the day and would earn Phillip a spot in the Southeastern Fly 20+ Club. Congratulations Phillip. We floated out catching more fish, first here then there and as the sun began to fall behind the tree lines. It was another good float and one that will go down in the books as a really eventful and nice day. Nice job guys!