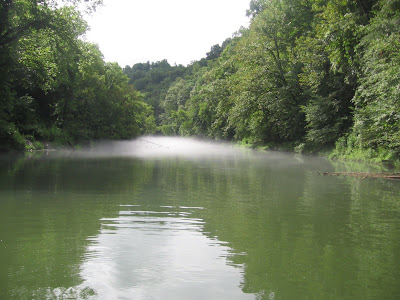 Friday morning- trying to finish tying a couple dozen flies, that I decided....last minute, to use tomorrow/today on the .

4:30 A.M. Friday morning- get up for coffee, load the boat, pack the coolers, just generally get ready to meet Rob and Garrett G, from the Woodstock GA area to go fly fishing on the Elk River.

stop at the local market for ice and more coffee.

arrive at their motel, load Rob and Garrett’s rods and gear, then off toward the river.

we stop at another market this time for donuts and more coffee. The lady at the counter is talking about (and I promise she says) “that gullywasher was something else this morning”. I find out this gullywasher was rolling through lower middle TN as I was waking up. I note the term gullywasher, pay her $5.87, as she smiles and talks to her co-worker about her garden. I turn to walk to the truck knowing we could have a stained river ahead of us.

the rods are rigged and the guys are fishing as I run the shuttle. 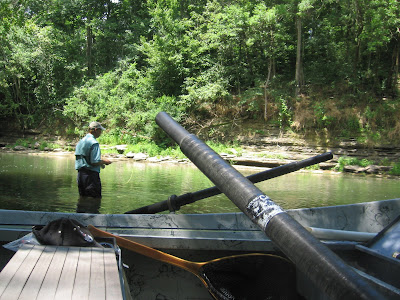 I arrive back at the boat where I find they have already caught 7 fish between them. Garrett has found the fish holding by an old log. The fish will stack here because they have cover from the log and a nice little pool to rest in while watching for their food. Rob has his fish located around a small shoal in the middle of the river and he hooks up just as I shut the door on the truck from the shuttle.

Today I put the guys on nymphs and midges. Hey what else would we do on the Elk on low water…..right? After the usual instructions…I.E. stay in the casting braces at all times when fishing and we will stop for lunch about or so, we are off. Garrett proves his casting technique is dead-on by dropping his fly off the bow of the boat, as instructed, and he picks up another rainbow in the first set of riffles. Rob is also accurate with his offering as well and we begin to boat fish after fish in the upper section. 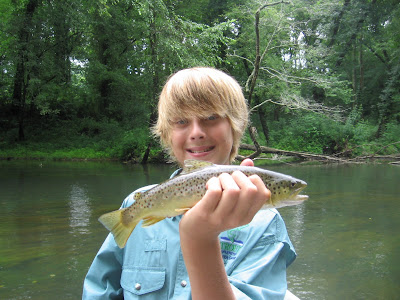 Garrett Hooked This One with a Fast Strip-Set

We discuss proper mending, try some dry flies, switch back to nymphs and discuss the strip set. Rob is first to learn the strip set. As he gets more proficient with setting the hook this way, the flies begin to move from being lodged in the side of the fish’s mouth to 5 fish later the flies are now stuck properly in the upper lip. Garret catches on as well and they begin to detect the strikes earlier. This produces several doubles through out the morning. 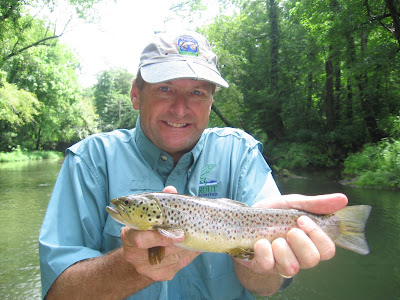 The water is stained, however not as bad as I had thought, but we hadn’t made it down to the creeks and larger watercress farms. The donuts were gone and it was time for lunch. Rob and Garrett chose the cedar plank grilled salmon for lunch and I fired up the grill. Garrett fished downstream while Rob and I discussed a few life topics. After lunch I had the opportunity to try Rob’s Orivs T3. The rod is light and requires a stroke that is slower and it makes the angler wait. I slowed my cast down and found the rod has a lot of power for such a light build. Rod testing is one of the many perks of being a fly fishing guide. 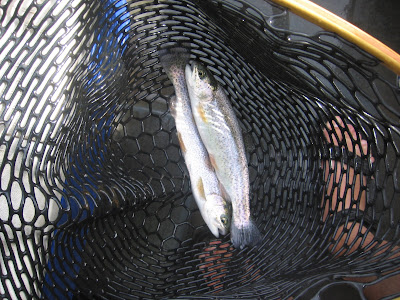 One of Many Doubles Throughout the Morning

We get back into the boat and the catching picks up immediately. Then we float into the run-off; first from a large creek and then into the watercress runoff. The catching stops and the fishing begins. My favorite stretch of river disappoints me for the first time ever. But, we charge on and I get Garrett on a streamer rod. We get him into the rhythm and he learns the jerk-strip retrieve remarkably fast. He is learning this while we discuss the finer points of a good shad kill. 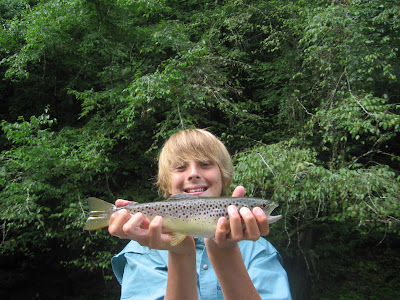 Garrett With Another Brown

we load the boat on the trailer and stow the rods in the truck. Grab another shot of caffeine from the cooler and up the ramp we go. The travel from the day before and a long day of fishing has worn Rob out. But Garrett has the energy of a young person and I think if daylight would have stayed with us he would have stayed until Rob and I both passed out.

Garrett and kids like Garrett are the future of fly fishing. Rob and Garrett are members of the Cohutta Chapter of TU and were there last Thursday when I ran down to to present Observations from the Tailwaters. The Cohutta Chapter has been around since the 1970’s. The chapter’s current membership is strong and they are making an effort to bring more young people into fly fishing. The chapter sponsors kids, kids fishing camps and makes other efforts to support the younger generation.

I drop the guys back at the motel and give them flies so they will have the right stuff to wade fish in the morning before they head back south.

It was a pleasure to fish with Rob and Garrett. Garrett has an excellent casting technique and has an open mind that is consumed by the river and fly fishing. Rob, has a lightning fast hook set, but more than an angler, Rob, a father who obviously makes it a priority to spend quality time with his son by getting them both out on the water together. 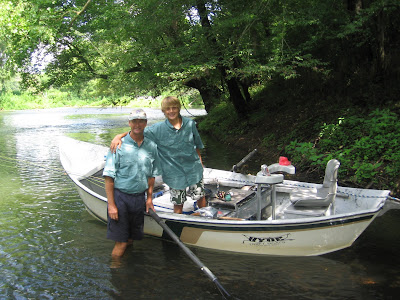 Rob and Garrett at Lunchtime

9:15 P.M. after a long drive home and several phone conversations later, concerning future trips, a couple river reports from Tennessee rivers and some Sam Bush to keep me awake, I roll into M’boro and get the boat into the garage… 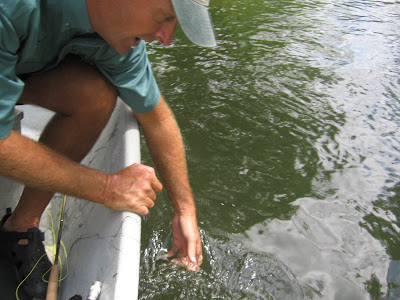