An After Dark Shot
First off let's start at the Obey. The river is fishing best on low water and there are some decent fish being caught & released on one generator. The water has been clear and cold, which is always good. Take nymphs but fish dries too.
---
The Elk is running 350 CFS over the spillgates. Wading in some of the usual places is a bit technical and so is the fishing this time of year. Nymphs will work, but soft hackles while midges are emerging are, as usual, very productive. If the Summer showers allow, try sight fishing as the fish feed just below the surface. Watch for the backs of the fish breaking the surface and then swing your favorite s0ft hackle or even small streamer across their nose. Raise the rod tip only after the fish has hit and you have applied a strip-set.
---
The Caney Fork continues to fish pretty good considering the heavy traffic on the weekends. We have been trying more topwater stuff than usual and having some luck. The terrestrials have been producing pretty well and the takes have been, well explosive. Terrestrials are not just about the hoppers either. We've found some other patterns that have been producing just a little better than the usual stuff everyone else wants to use. Don't forget nymphs drifted close to structure though, it can produce an above average fish as long the drift is totally drag free. Midges fished in the film, to feeding fish in the evening, can be productive too. Get into the right position, wait for the waves to settle from your movement, when the fish begin feeding again just be very picky with the casts. 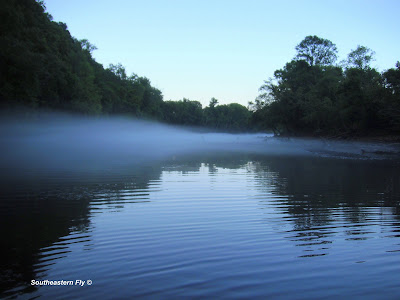 An Evening on the River
David K and I went to the river in the evening to get out of the heat. We stopped several times, which ran us out of daylight. But, even in the dark there was pretty good fishing and a different look at a familiar river. We launched and while David rigged his rods I got a shot at some rising fish. I was surprised when a decent little brown came up to the top and busted the fly. 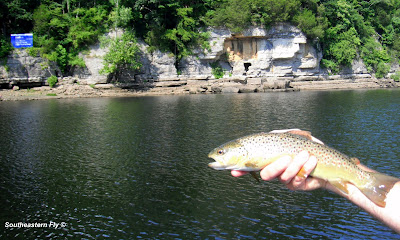 A Top Secret Location
We fished to rising fish off and on. David couldn't wait to fish big streamers on the falling sun. I could not wait to fish a big ole top water bug as we headed slowly toward the take out on no sun or moon for that matter. We fished top water even in the complete darkness, but it was unproductive this time. I am having some carryover from the recent Michigan trip and know it, but just can't resist doing things a little differently than everyone else. In the past we have bagged some nice browns on top and after dark. So my method, although can be maddening, is not completely without merit. Anyway before the evening was over I was slinging big nasty streamers on full sinking lines while David was at the oars of the drifter. The bats were out in full force, and you guessed it, a bat got caught up in the line and landed in the front of the boat. I thought it was a leaf and couldn't really see it, so I left it there. FYI- leaves don't flop around in the bow of a boat. I dug out the light and was surprised to see the leaf was really a bat. So the Summer of 2011 produces one snake on a cicada and one bat on a big streamer. Not the usual catch and not what I wanted, but exciting.
---
David warmed up his casting arm for his trip to Yellowstone and popped a nice brown on a big ugly single hook streamer. He is ready for his trip now and we finished the float on a decent fish. No after dark float is complete without an angry beaver slapping the water beside the boat. In total darkness the slap can be more scary than, say, even a bat! 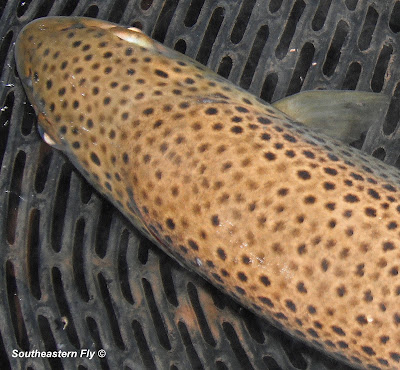