Glad to See These in the River
The Elk- The Elk is running 350 CFS still. The flow is excellent if you are wading and great for floating. Soft hackles are producing fish when they are fished across the shoals and there are more shallows from the higher water to swing those Bust-A-Browns. Swing'em if you got'em. The bigger fish have finally turned off the cicada patterns for the most part and they haven't completely turned onto the big hoppers. But, don't fret it won't be too long. Until then try some smaller hopper patterns and floating ants have potential. Even if they sink just a bit hat's OK, ants aren't know for their Olympic swimming abilities.
---
The Obey- Not much to report on the Obey other than good numbers of fish on clear water. The generation is favorable for both wading and floating. Catching falling water produces the best opportunities for a double digit day. Nymphs, nymphs and more nymphs get down to those more quality fish. Take those smaller nymphs and certainly don't leave home without you favorite midge patterns.
---
The Caney Fork- Middle Tennessee's highest profile river is crowded and the fishing can be a bit slow. Nymphs are producing as well as midges. Dry flies are making good indicators for the small stuff and some anglers are reporting good fish when changing colors early and often. The TWRA guys are on the river. We have seen them the last 5 out of 6 times we have been out there. On the most recent trip they were writing tickets to a guy who kept fish that were too short. The reported fine was approximately $400.00. That's a lot of fresh salmon at Kroger if you do the math. Hopefully the Judge will back the guys who wrote the ticket if this dude decides to appear in the Court room.

Lot's of Habitat on High Water 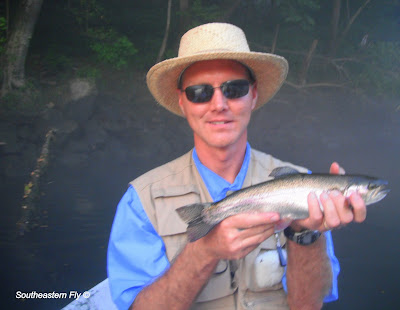 One for Joe on his Lucky Fly
The mission was to get Joe into a brown trout. We figured that wouldn't be a problem because the last several trips had seen several in the net. Joe proved he had the skills to catch rainbows and even some nice brookies, but the browns were not fooled. We found a nice pod of browns and tried the usual stuff that almost always brings out the larger fish. After starting late in the day the falling sun gave way to darkness and the browns remained elusive. We are already making plans to go back for another shot at the nice browns we know the river holds as we continue to make 2011 the Year of Getting Out There. 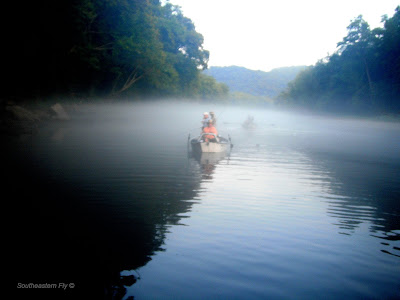 Mark, and the Guys Were Close Most of the Day 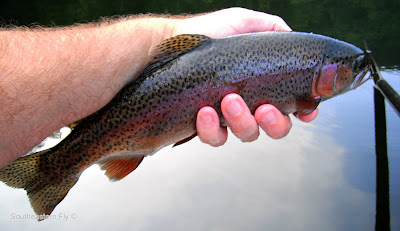