Fly Fishing the Roaring Fork in the Great Smoky Mountains 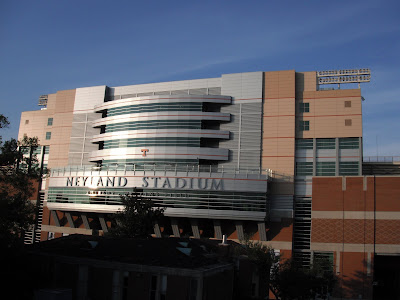 Neyland Stadium....just like the sign says
Sometimes it is good to take time away. When my wife said she wanted to go to the Smokies, who was I to disagree? We loaded up the truck and headed East. This Summer we have been going by colleges, so our daughter could see the different campus', because it's never too early to start looking for a good one. When we decided to head toward Knoxville we couldn't resist stopping by for a look. We ended up down at the stadium and my daughter got one of her life lessons, a lesson that I learned long ago from a close friend. When entering somewhere and your are not sure if you should be there....Just act like you know where you are going and like you are "supposed" to be there. We went in and took a look around. The ground crew is getting ready for the upcoming season as they marked the lines and of course the T on the field. After some snapshots inside and out, we were off again. 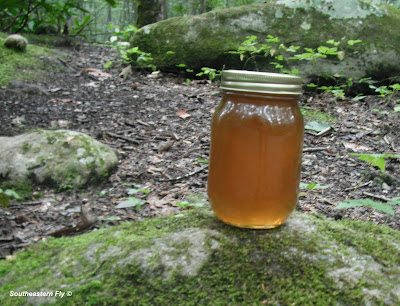 A Jar of Honey...My Parking Pass 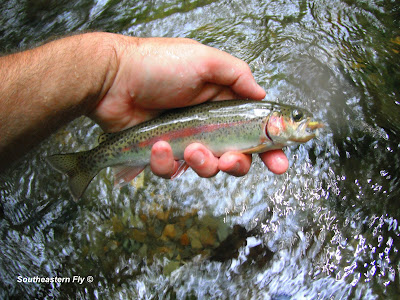 A Roaring Fork Rainbow
Then it was up into the Smokies to hit some water on the Gatlinburg side. It was good to get back over there after several years of fishing near Townsend. The guys at Smoky Mountain Angler set me up with the right dries and off I went. Roaring Fork is close to the cabin we were in and with the girls safely at the pool I had the river too myself and no worries otherwise.
--
The fly of the day was going to be a size #10 Thunderhead, just like I usually fish. With my usual Thunderhead stash and some newly added yellow Parachute Adams I was armed ready for some dry fly fishing. The water levels were low, which made stealth was the approach of the day. It's been a while since I have been out of the drifter and on foot. But, when a trout did a drive-by on my third cast it felt good to be back fishing for opportunistic feeders. The Thunderhead fished well in the runs and especially in the more rough water. 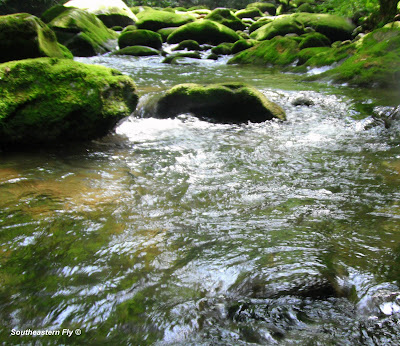 Pools and Runs of Roaring Fork 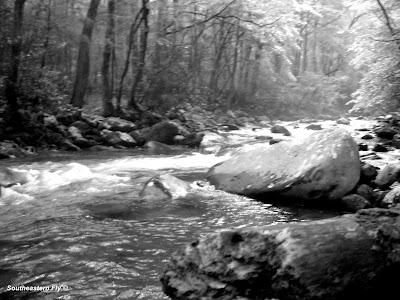 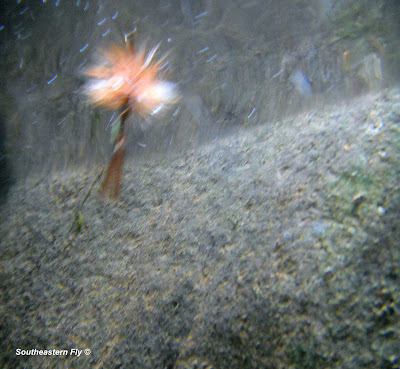 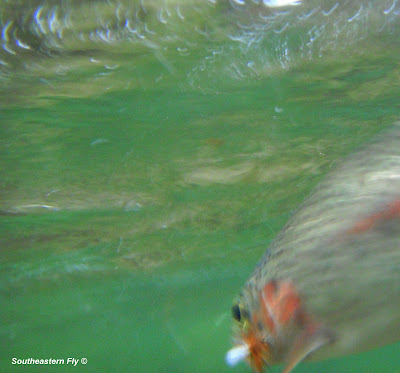 The Parachute Adams
The runs were producing and interestingly enough so were the back of the pools. There bigger fish seemed to be hanging back out of the swift water and just taking leftovers. That was fine because they made me work on my stealthy approach. I would like to think I got better at stealth, but the majority of the fish came from more swift water. It appears we may need to go back again to help me get better at my approach. 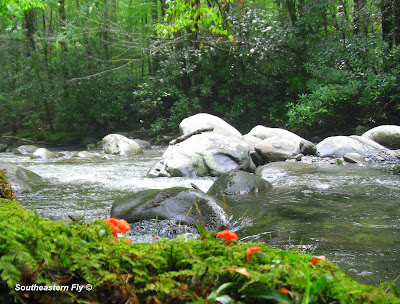 Orange, How Appropriate
This was the first day. The pace of fishing was swift, with stops at likely looking cover and a fish here and then there. The Roaring Fork Nature Trail is a loop road that runs up above the Roaring Fork, so the road was in sight most of the morning, which is comforting when fishing alone.
***
So, what is up with the jar of honey? The road around the Roaring Fork Nature Trail is usually backed up with sight-seeing tourons. In order to get some fishing in quickly it is best to either make a made dash the wrong way on a one way road, to a parking space at the exit of the loop. Or, you can stop at the store at the end of the loop and try to talk your way into a hard to come-by parking spot. I chose option B and found a fresh jar of honey for my trouble. Here is a warning though, don't park without permission not only because it isn't cool, but also because if you park in the wrong spot the vehicle may be towed, which could put a bad mark on a good day of fishing.
***
So that was the first day and when I got back I found the girls planted on lounge chairs at the pool. Immediately I began my plans to get back out the following morning, this time to fish other waters. But heavy rain was in the forecast...
Posted by ____________________________ at 3:53 PM