A text came one evening while I was sitting at home after spending time on the river. David was coming home from Colorado to visit his family. Most of our trips for the year are over and I was/am looking for excuses to get out on the water and wet a line. David would spend some time in the Smoky Mountains National Park and the following day spend time in the drifter on the Caney Fork. A check of the future generation schedule revealed the one generator would turn off at 11:00 A.M.  and turn back on at 5:00 P.M. We set up a time to meet and launch, then I rigged rods and loaded the streamer boxes for the trip.
We launched the drifter and went for large fish on streamers. We tried several different colors on the color palette. Eventually we ended on yellow with a little flash on the body. The first fish was an aggressive brookie. The brook trout took the streamer on the edge of a seam in deep water and from the looks of the bottom of the tail, recently it had been busy clearing some gravel. Anyway we were glad to see the fish and removed the skunk.
Late in the morning the Army Corps shut down the generation and the fish began to come to the surface. We threw some different nymphs, midges and dries, but they were keyed into something too small to match. That was OK because it was really a good day just to be out and once the water calmed we could try some additional tricks.

We floated into a well known spot on the river and with David in the casting brace I was hoping he would get a good fish so I could fish again.  We were fishing the edge of a seam (notice a theme here) and David hooked up. The fish put a bend in the Hydros and we chased the fish momentarily before David got control and brought it to the net. The nice rainbow was a welcome sight and measured in as the best fish of the day...then it was my turn. 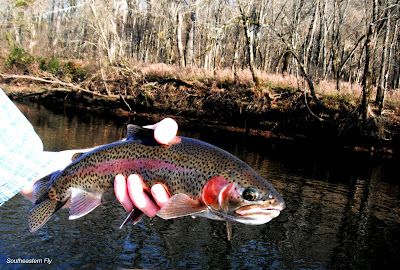 David was at the oars we were making good time to the take out. At mid-float we decided to fish deeper since the water wasn't falling out as fast as it usually falls out. The first cast after going deeper we hooked up with a decent rainbow. While David was releasing that fish, I cast again into some soft water that was behind a blowdown. I have put anglers in this spot many times and nothing happened. This time another fish struck almost immediately and David turned briefly to see if any help was needed. At that time everything was under control, then a few seconds later the fish started head shaking and went on a run. This got both our attention and David began spinning the drifter as the fish made a quick lap around (all the way around) the boat. In between head shakes the fish would make a run. Some line would be gained, then lost, then another head shake and run. David saw the tail come up when the fish was still a ways from the boat and he got excited. I didn't see the fish until it was next to the boat and then I got excited too. A nice fish still can really get the heart rate up. The fish came into the net and it was a brown trout that really makes a trip. We snapped some photos and admired the fish while reviving it. The net was lowered in the water column and the brown slowly came out, then with a kick of the tail it was gone. A short time later the sunlight was going too, so we fished from spot to spot until we were sliding the drifter into the takeout.