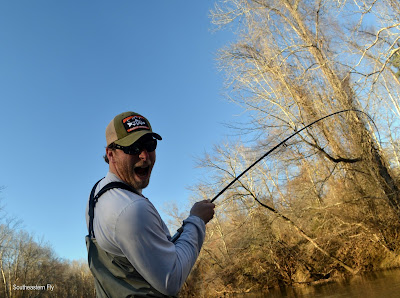 How bad do angler's want that big fish?  Dan wants the big fish so bad he would drive three hours, throw a big streamer for hours on end and then drive three hours to get home. After all that he somehow answers the bell to be at work the next morning. 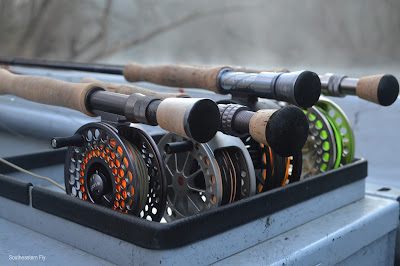 When I rolled into the ramp parking lot early there was a lot of activity. Vehicles parked all around and blocking the muddy ramp. People scurrying around not doing much of anything but getting in the way. Eventually the people moved those vehicles out of the way and began to go about their day.

Dan and David K. were suited up and soon loaded their stuff in the drifter. There were boxes of flies, fly rods, jackets, leaders, lunches, nets, cameras and all the other things that make a good day on the water. What was the most important thing in the boat? In my opinion David brought chocolate brownies! An entire large Ziploc bag of fresh chocolate goodness.

After backing down the muddy ramp we slid the drifter off the trailer. Before long we felt the boat push away from the gravel bank and take its rightful place floating high on a smooth flowing river. And it felt good too. 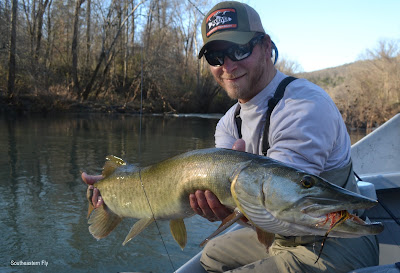 Musky fishing is not really as glamorous as people think. There is a lot of time spent casting, pulling big streamers, turning some figure eights, and picking the next likely spot...then casting again.

Each angler will take a different approach. David K. is one who likes to change flies throughout the day and he is good about experimenting with those different patterns and colors. That helps pass the time and gives a boost to his confidence level at times. Dan was sticking with one fly. That fly apparently brought him confidence. As the day wore on and the follows came for both David and Dan their confidence was building in both ends of the boat. Me? I couldn't buy a follow.

We were bombing a particularly a good bank. I was keeping the guys more toward that bank and Dan was in the front brace getting some good shots. He was swimming that articulated fly off the bank and across some vegetation, skipping it across some smaller pot holes. I felt the line come tight from the rower's bench and looked up to see Dan was already leading the fish. He was gaining control and putting a big bend in his 11 wt. It seemed like we all knew what to do. I stayed on the oars and grabbed a camera, while David dug out the net. Dan was staying ahead of the fish and it was now making some runs around the front of the boat. The fish made a big run to the right and jumped a couple times, Dan grabbed a handful of cork and lead that fish back to the left side of the boat. Then we saw the head come up and he coaxed it into David's waiting net. We clicked off some photos and soon the fish was released and swimming away. A few compliments to the angler and we were floating again.

Dan summed up this musky take in an almost perfect manner. His recollection of the still fresh events? "I was watching my fly coming back toward the boat, the fly disappeared and there was a big fish on the line". Sounds pretty simple but nothing is quite as simple as it seems. 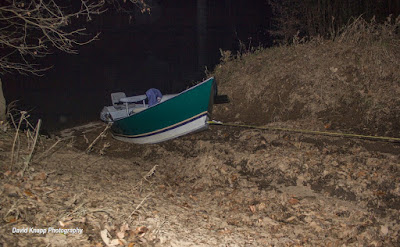 Adventure Problem Solving: David K and I have been in some situations that would require some serious problem solving skills. The end of this float was deemed the adventure portion of the day when we finally made it to the takeout. Arriving after dark, the takeout was solid mud with no way of getting the truck and trailer to the water's edge. So after some thought, as well as an extra strap we pulled the boat up the muddy bank using the truck.  It wasn't too long before we had the boat on the trailer and were headed down the highway after a long day of casting big flies to big fish. Dan and David it was another good day thanks for the fellowship and good stories. Dan, congratulations on joining a group of really good anglers in the Southeastern Fly 20+ Club.