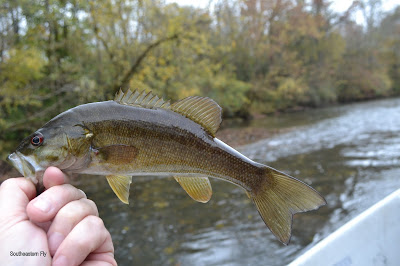 The last days of Fall got us into some nice fish and as Winter comes our way we are off to a pretty good start. We have a strong number of musky haunts picked out and ready for anglers to throw meaty streamers. The musky flies are tied and the 10 weight rods are loaded with just the right lines. Also, from time to time throughout the winter floats I expect to pick up some smallies.

Are bigger musky streamers better? There are many different schools of thought on this subject. Such as which types of food are available in the system at a certain time? The answer to this question supports just one of those schools of thought concerning the size of the fly. Getting a fish to strike isn't about what catches the angler's eye. It can be more about what the fish is looking to eat in the system or what the fish has been eating in that system the last few days.  Reaction strikes? Reaction strikes are a different situation all together. Some of our best fish have come on the reaction strike. The fly hits the water and after a pull or two on the streamer, bang, fish on! Normally these strikes are very much blind luck. But, blind luck strikes can be among least expected and the most exciting. Ready to get out there and fish for those toothy critters? We have everything to put you in position to pick up your fish of a lifetime. 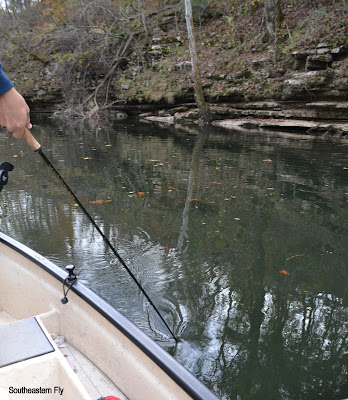 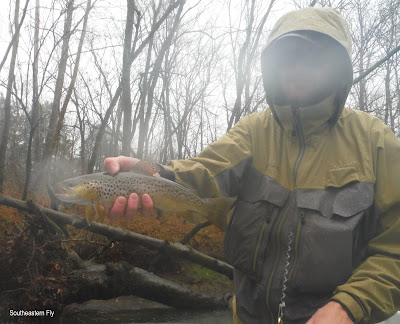 Winter and early Spring on the tailwaters are some of the best "big fish days". Even though it is early and really cold weather is still around the corner, the big fish "are on the eat." We have been pretty lucky so far and caught our share of nice ones. If you want to trophy hunt we can put you in position to do that too. 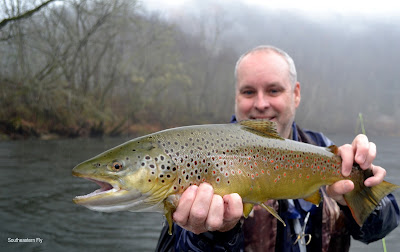 I called David K. and we agreed to meet up and float the river on high water. The weather was going to be wet and nasty with additional nastiness as the day wore on. We began the day banging along the banks. There was very little action. A few fish flashing but no real commitment was just the way it was going. We swapped tactics and anchored to fish the edge of a gravel bar. A few hours early the gravel bars were high and dry, but with the high water we finally found some feeding fish. I was lucky to be in the front brace and David was in the rear brace. Both of us were thrashing the water wildly tossing smaller streamers. The absence of color was getting the most looks. Finally the 6 wt, Helios 2 stopped in mid-presentation and the first fight of the day was on.

It didn't take long to figure out this was a big fish. There was the stop of the rod, the hook set with a pull back from the fish and then the head shakes. There were a lot of head shakes and when that wasn't working the fish went to the bottom of the river to try something new. Fortunately, I saw this fishy move the day before with Donnie in the front brace and remembered what to do. I didn't completely lose my mind but it could have happened. While all this action was unfolding David K. moved into the rower's seat and lifted the anchor. He also had his net poised for the scoop. When the time was right and the fish was ready, we moved the fish into the net. A couple hero shots, some time to revive the fish and then it was over. The river was once again calm with a quick flow. Just like that we were just watching the river pass. However, now we were both saying "wow what a fish". Then it was David's turn in the front brace as I checked back in at the rower's seat. A short time later we spotted an eagle enjoying the river as well. It was all came together just as the rain picked up. 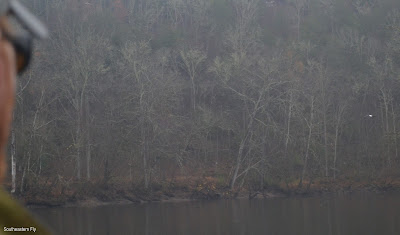 Do you want to learn to streamer fish or already know how but want your shot at a big fish? The rivers in Middle Tennessee are pretty darned pleasant right now and should be that way for the next few months. The recreational traffic is non-existent for the most part and the fair weather anglers are couch-sitting. That's fine because just these two factors open up more opportunity, which is needed as the metabolism of the fish slows a little. There are no guarantees when hunting for that trophy fish, but there are some open dates on the calendar before and after the New Year to get your shot. Just get in touch via email, phone or text to get a date on the books.

There was 5" of rain that fell in Middle Tennessee so right now there is enough water to go around. But, already the lakes have peaked and have begun their fall. We are expecting heavy generation for the next few weeks at least. After that we are hoping for some longer windows of fishable flows as we move toward colder weather. Stay tuned for reports throughout the upcoming months.