John and Alex- Testing the No Bananas Folklore 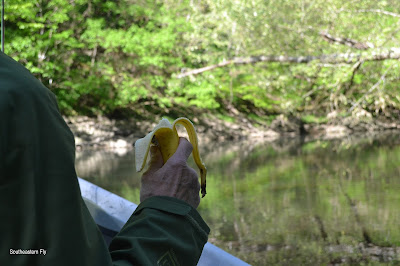 Most folks have heard the folklore of No Bananas on a fishing vessel. Sometimes I will ask if anyone has bananas, but other times I forget and a banana will be in someone's bag. This time John had one in his bag and the contraband went unnoticed. The contraband would go unnoticed by the fish on this day as well. 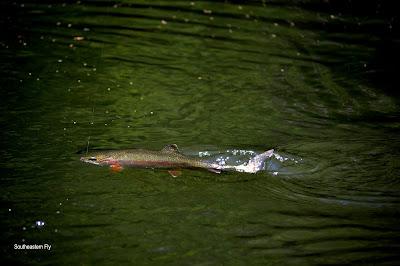 John came in from Wisconsin and traveled with Alex from Nashville. After having to back track because of a wreck, pulling the boat through a busy Walmart parking lot and quite possibly exceeding a speed limit here and there, I pulled into the ramp at practically the exact time as John and Alex arrived.  It wasn't long before the rods were rigged with nymphs and the boat was pushed off the trailer and into the flow of the water. 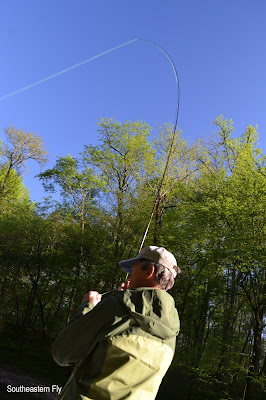 We loaded everything else into the boat and turned to push toward productive water. Alex offered up the front brace and John challenged the offer. But Alex insisted and, well, John took the front brace with a grin. Sometimes productive water is within the reach of a short cast. Before the boat hit the slow current John made a quick cast from the front brace. Within 10 seconds of shoving off, he would bring the first fish to the net. The banana was still buried deep within the bag and still going unnoticed. 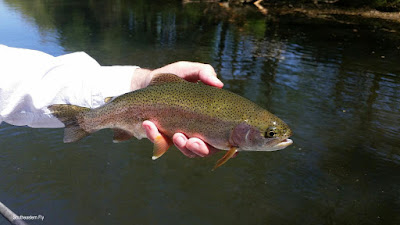 The fish were apparently waiting on the angler in the front brace to cast and when opportunity met the good presentation they would eat. John was quick to set the hook and the fish continued coming to the net with some regularity. Alex was warming up from the rear brace and the fish began to respond to him as well. John, however was well ahead in the numbers game. We would fish and re-fish sections with good results in each stretch. On one of our short breaks John pulled out the banana... A hush came over the boat...OK not really. We had a short discussion concerning the tales of old sailors and the fear of bananas on a fishing vessel.  The banana would be consumed and shortly the guys would begin picking up slightly better fish. 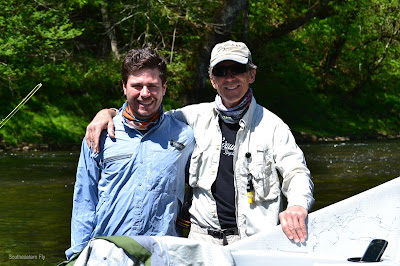 Additional passes through the more productive areas would give us opportunity to spot better cover. But, the trip for John and Alex was coming to an end. There would be two more fish. The two best fish of the day would come at the end of the float. John and Alex would bring their best fish to the net on their last casts and one then the other would hook the fly to the keeper and reel up the line, ending their day. 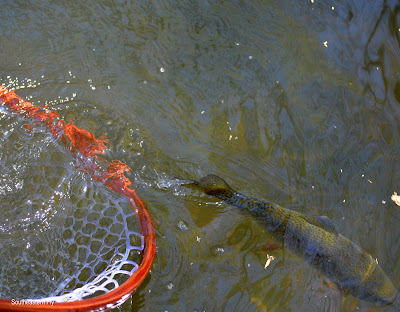 The boat ground to a halt on the gravel bar. It wasn't long before the winch was cranking and the bow of the boat was coming across the rear trailer bar. then it fell into place against the bow brace on the trailer. John and Alex had another good day on the river. Next time I bet Alex will be in that front casting brace.... 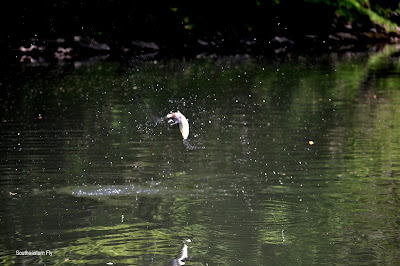