Brent Gets Back Into the 20+ Club After a Long Absence 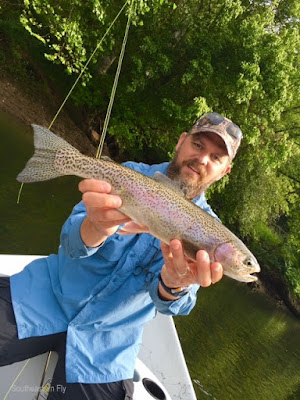 It's been awhile since Brent has been able to get some time to fish aboard the F/V Southeastern Fly. But, when he finally gets time, Brent makes the most of that time in the front casting brace. This trip wasn't all about the fish. Let me me rephrase that previous statement. This trip didn't start off all about the fish, it quickly turned that way. We were floating along discussing the life events in both of our lives. The fog was thick and the wildlife was out. When we approached a group of deer, which were standing in the water, we realized they were eating vegetation from the bottom of the river. As we slipped closer, they slowly made their way up the bank and then into the woods. They were aware of our presence but did not seem worried as we drifted slowly downstream and through the layer of fog. With the wildlife out, but no rises to speak of, we went to work. 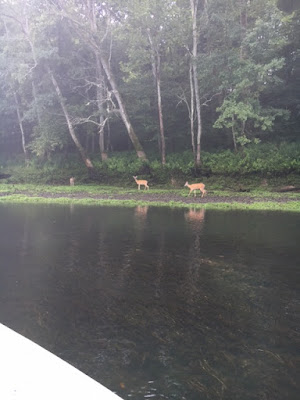 Brent stepped up to the front brace and began to hit the feeding lanes. It wasn't long before we had the first fish in the net. Brent's casting was spot-on. He laid the flies where I asked with accuracy and brought a couple tricks of his own. Other anglers were catching fish as well and a day of big fish quickly became the feeling.

Every guide has certain banks, runs, riffles and flats they like to fish. Most all of those favorite haunts would produce fish on this trip. The first likely bank brought two good fish to the fly, but only one to the net.

It wasn't too long before we slipped up to the edge of the Hog Trough. After a nice rainbow came to hand, Brent laid another cast into a likely spot. A big fish swirled and ate. The fight was on. Brent was doing a great job keeping the fish out of the weeds and the sticks. As I made my way to the front of the boat, net in hand, there was a lot going on. That's when I saw a submarine pass by the 20+ fish Brent was sparring with from the front brace. The other fish caught my eye as it spooked and I will be back for that one. Brent had his hands full as he fought his fish in tight-quarters. Keeping the fish out of trouble was a miracle and series of correct moves. The big brown came to the net and Brent was once again in the Southeastern Fly 20+ Club. But the day wasn't over...not by a long shot. 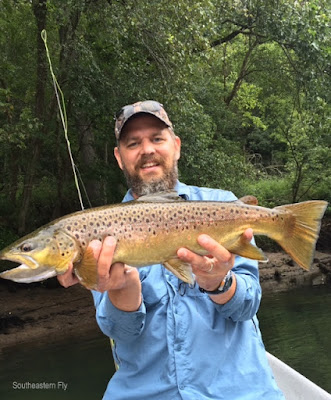 There were some other fish eating and some nice fish too. Brent continued to be dialed-in and didn't lose focus. For most, fly fishing is about getting outdoors, enjoying the river, enjoying the fish and hopefully the company. There are many other things that come into play that may not be listed here, but of those things the fish are what seem to draw the anglers to a river. Sometimes when the river is fishing good, angler's can lose focus. It's easy to let your guard down once a milestone has been accomplished. Like I said, Brent didn't lose focus as he raised the rod tip and brought more fish to the net. The numbers were good and we were adding quality fish to that count. 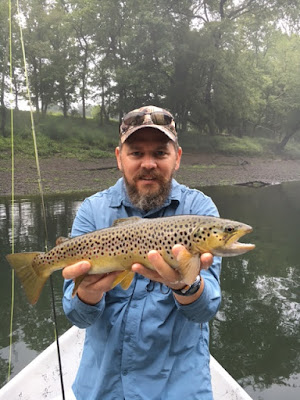 We rode the slow drift into the Meat Locker, a good piece of liquid real estate that has provided us with quality fish in the past. I will spare the details of the hook-set and we will start the story where the fish takes enough line to get on the reel without Brent's help. This fish was on a long run and didn't want to stop.  Keeping the rod tip high and with the correct angle Brent got the head turned...finally. The fish was pulling and accelerating by using its big tail. Brent kept working the Orvis Recon and the fish responded by making shorter runs each time, then it started coming our way. The big Brodin net waited.

We talk a lot about fish making one last run. This fish was no different and made its last run to the right. Brent used the butt of the rod to gain enough pressure to stop the run. When the head of the fish came to surface Brent lifted the rod even higher and the fish slid safely into the Brodin. Brent was once again in the 20+ Club.

We wrapped up the day by seeing some familiar faces and getting a few laughs at the craziness that is a Middle Tennessee boat ramp. Yes, I am going to write a book, with pictures, some day. For now there are fish that need to be caught and released and anglers who need to get out on the water. It was good to spend the day on the boat with Brent again. With all the action we had, this is one trip that will be difficult to top. Congratulations on your two entries in the Southeastern Fly 20+ Club. 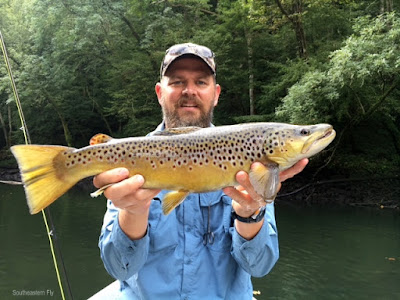