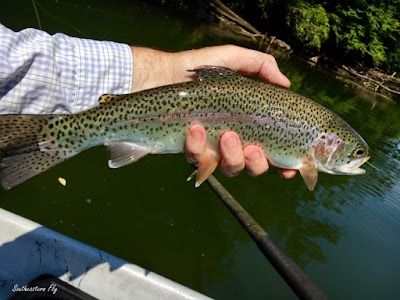 The last time Marc and Lawson were aboard the drifter we were on the Caney Fork. We caught some nice fish including Marc’s really nice brown. This time we shoved off and we caught up with the life changes that happen over the course of two or three years. It didn’t take long before Lawson was on the board with his first rainbow of the day. Marc didn't waste too much time to get on that same board himself. 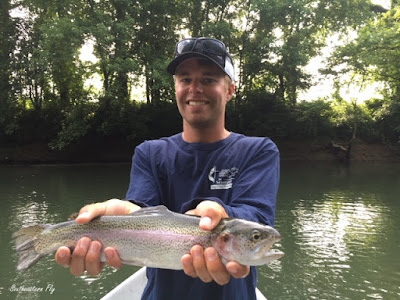 Fishing the shelves and drop-offs: Lawson was well into a drift across a drop off when he set the hook on a nice rainbow. But it all started with knowing where the drop off starts, its depth and naturally setting up for a clean drift.
Knowing where the drop off begins is as easy as knowing the contour of the riverbed you are fishing. That comes with time but the closer you can pay attention to the currents and how those currents and color changes reveal the underwater structures, the more accurate you can set up for the drift of your fly. 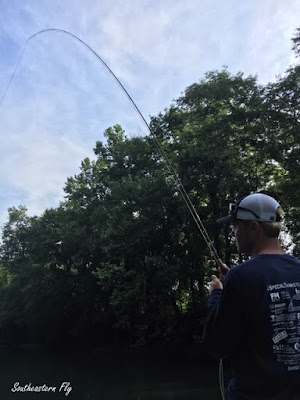 Start the drift before the drop off. Casting and then achieving the right mend will set the pace for the fly. Depth is extremely important when fishing drop offs. Set your nymph too deep and the nymph will drag the bottom, many times wrecking your chances of getting the fly in the face of the fish. Setting the nymph too shallow and the fish will likely never know the fly has even been presented. 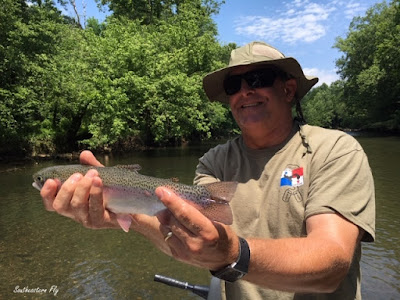 We set Lawson up for a good drift over the drop off. The color change was obvious and Lawson dropped the fly right at the leading edge (upstream) of the drop off. The fly hit the water first and was followed by the indicator. This technique sends the fly to the strike zone quickly. When Lawson’s fly began the descent it settled after the mend and we had a good drift going. The fly pattern is a good pattern but the presentation was as good as they come and the rainbow couldn’t help itself. The fish ate and Lawson set the hook.

The rainbow came out of the hole and into shallow water. Rainbows are quite active fish and they fight the same way. The rainbows on this day were jumping and running each time they were hooked. Lawson was in good form and keeping the fish in front of him with the rod at a 45 degree angle. The fish didn’t come to the net without a fight but it came to the net and Lawson scored a good sized rainbow.


We grabbed a stream-side lunch and rested. The river was fishing good and we even caught some fish while relaxing on the gravel bar. The rest of the river has been fishing slower so I prepped the guys with a rundown of past trips. We wrapped up lunch and Marc and Lawson slipped back into the casting braces. 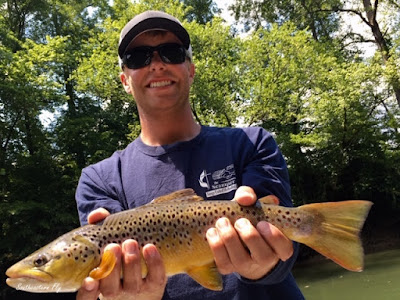 Lawson was again in the front brace and Marc in the back. The fishing was still good as we entered a new stretch of water. We fished a small and indiscreet pool which gave up a couple more rainbows. We moved across a small gravel bar and Lawson dropped his fly on a rock pile. The fly settled and it didn’t float long before Lawson was setting the hook. The brown trout came off the rock pile and headed toward the bank and several blowdowns. Lawson pulled on the rod and applied some side pressure. The fish came to the net a short time later. It was a healthy brown, not the biggest in he river, but the water flowing across the rock pile was giving up oxygen, food and cover and keeping the brown in good shape. 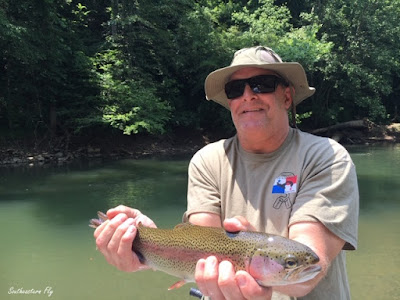 Marc needed a better fish to complete his day and to take away some of Lawson’s bragging rights. We entered a bend with lots of downed-timber and Marc laid his fly along a parallel log. It was a lengthy drift but Marc was able to stay with the mend and keep the presentation going. He set the hook and a feisty rainbow came away from the log but tried its best to get back. Marc kept the pressure on and gained line pretty quick. We didn’t let the fish pull for long and short time later Marc had a good rainbow and took away just a little bit of Lawson’s bragging rights.

We kept fishing and adding fish to the count. Overall it was a good day with a couple fine fellows. I always enjoy their company and the discussions we have along the way. Those discussions along with fishing the drop-offs, rock piles, runs and bends make a day on the water extremely enjoyable.

The rivers are fishing well and we have some open dates. If you have read this far and are thinking it might be time to call to get your date on the books, there’s not a better time than the next several weeks.
If you are a seasoned angler or have never picked up a fly rod and want to set up a day on the river e-mail or call/text 615-796-5143 to book a day on the water. For additional booking information see our Homepage and to see the latest fishing report click here.