I hope everyone had a Merry Christmas! Anglers who have been checking back to look at the report throughout the month of December have seen we had taken a few weeks off from report. The drifter has been out of the garage a few times, but not as much as other months of the year. We are a few days away from 2015 and it is crazy how fast all 360-something days of 2014 went...Before we go charging off into the unknown of the new year there is one last thing to do for 2014 and that's take a few minutes to look back. 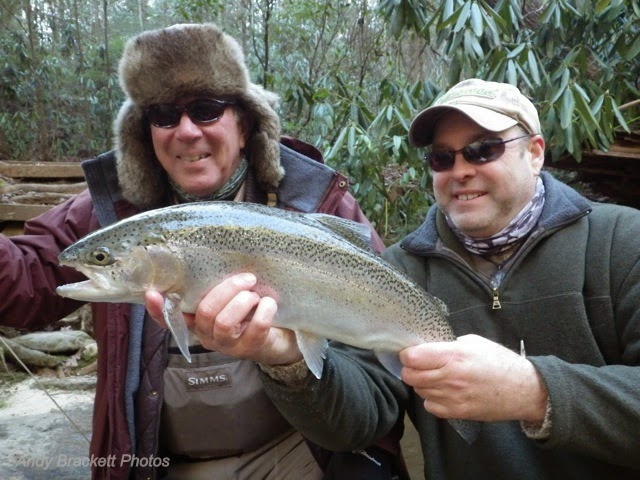 The year began on the tailwaters with good friends and some cold weather. The fishing in Middle Tennessee had been good. But, now Howard and I were headed to the river to catch some big browns and rainbows on private water in North Georgia. It was cold, real cold that day, just like the rest of January had been. The temperature was six degrees and we were loaded with extra clothes and pockets full of hand warmers.

Andy was our guide and he put us on fish right away. We stayed on big fish all day, only stopping for a quick lunch of hot soup. Soon we were back in the river. We were all thankful on that day. First the wind was not blowing and finally the temperatures had slowly climbed into double digits. 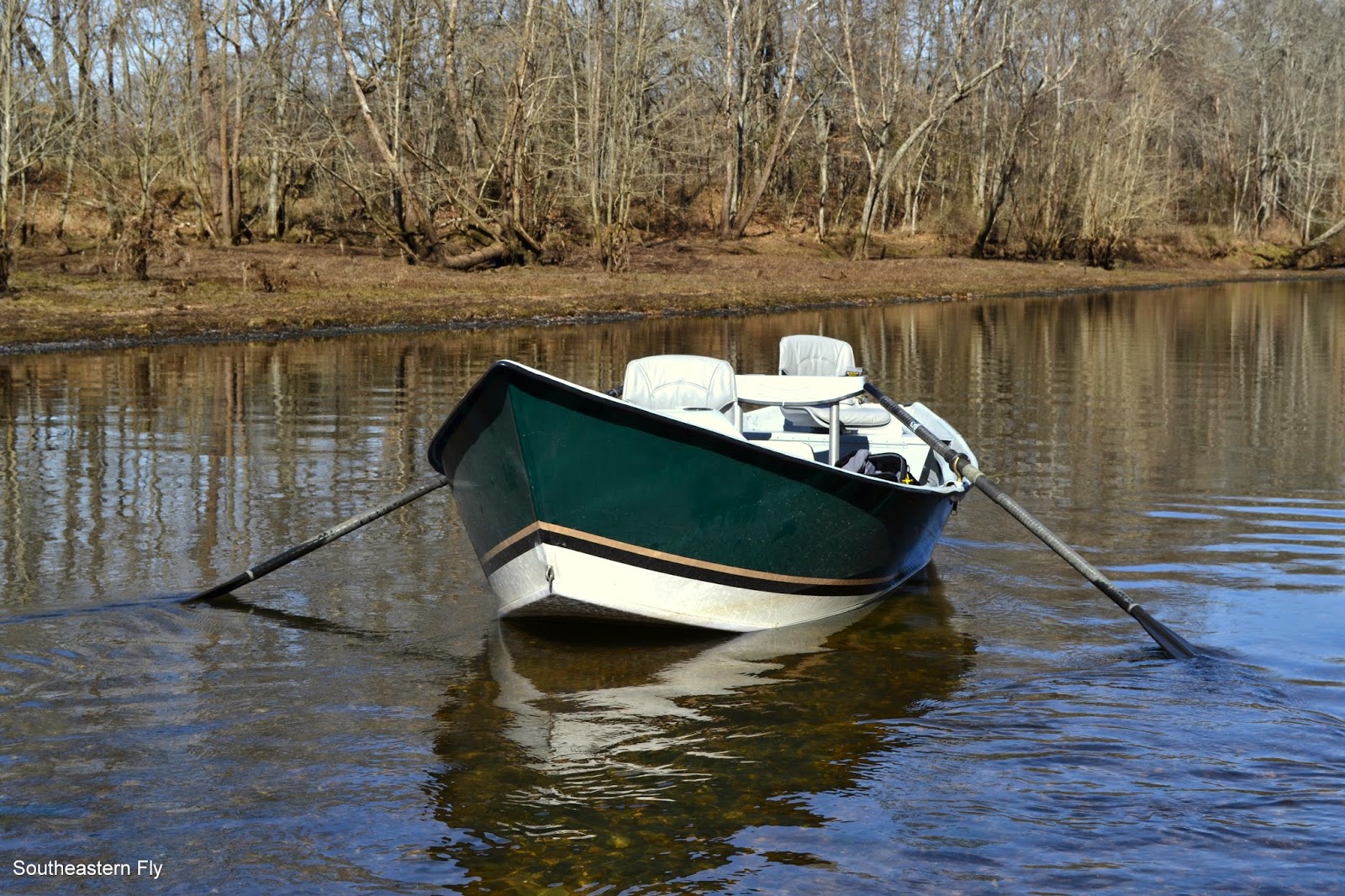 We rolled through the the cold months of Winter with fly tying and working a fishing show here and there. The fishing was good and the drifter was on the water quite a bit. Wintertime fishing was picking up and despite the cold weather we were on the water making new friends while also spending time with old friends. 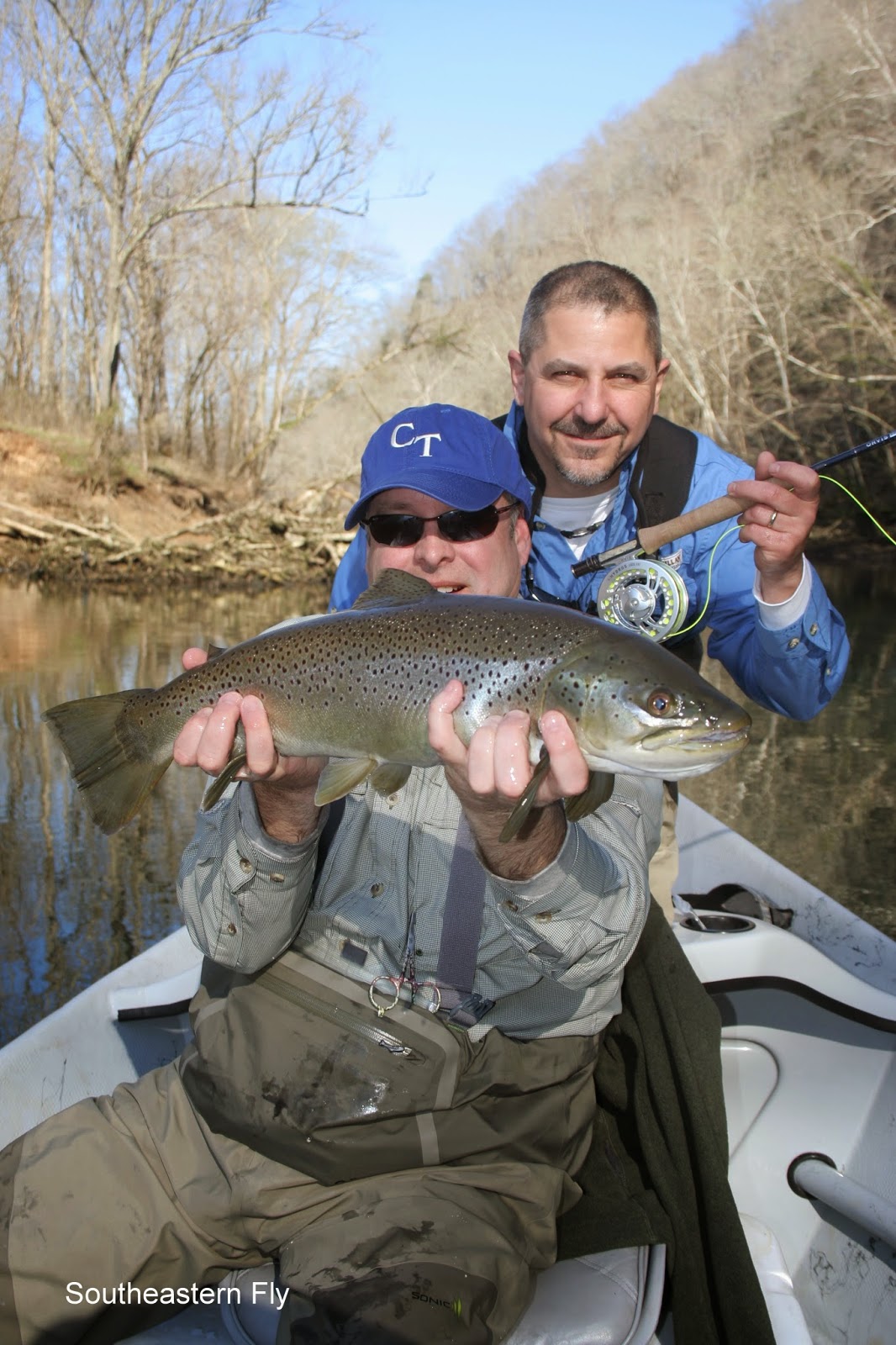 The rivers fished well throughout the cold months and on one particular day Jim entered the 20+ Club. This wasn't the only fish caught but it was one of the best fish. This fish took a nymph on a lazy afternoon float. We were moving toward Spring and after chunkin' streamers all Winter it seemed like a good day to relax and nymph. This fish ate the nymph, Jim set the hook and immediately came out of the water with head shakes like a metaphor we haven't thought of yet. There was still more streamer fishing to be done throughout the next several weeks, but sometimes it is good to get a day like this during the cold Winter months. The Elk and Caney Fork continued to fish well and when throwing streamers it seemed just about anything was working. We pulled streamers using slow strips, long strips and short strips. The fish would respond to those techniques as well as a streamer dead-drifted under an indicator on high water. Some days everything just seemed to go right. Somewhere along the way there were two trips to the Smoky Mountains thrown in to keep things interesting. Trout trips were cranking up and the fish were still eating. We were still several weeks away from the rainy season and folks were getting out on the water. Anglers from as far away as Texas and Maryland were stepping on the drifter and we were making some good friends along the way. I am fortunate to have spent time with as many nice folks as I did over the past year. One of the highlights of the year was spending time with a group of guides and the ladies of Casting for Recovery. This was a special day on the water and I am looking forward to the next outing. The day after the CFR event, I was on a flight to Colorado. It was an all expense paid trip to the Rockies with some time to kick around the Park and wet a line along the way. Like I said before it was a good year and I am very fortunate. It was nice to fish lakes and streams among the Elk, moose and other animals. We "did" the Estes Park side of the Rocky Mountain National Park in what seemed like record time. The heavy snowfall and uncleared roads at Rainbow Curve stopped our sightseeing to the other side of the Park, but maybe next year I can get back over there and fish that little stream we found in 2013. But, as usual the time was short and I wasn't ready to leave, but couldn't wait to get home either, if that makes any sense. Some rivers of the third new state for 2014 was fished.... Soon I was back in the rowers bench and doing my best to put anglers in a position to catch some fish. Some days were better than others but all the days were good and produced fish. The kids this year were a lot of fun and get pretty darned excited when they catch fish. Everyone gets excited when the younger crowd catches big fish and it is all the better when they do it all on their own, with just a little instruction. Summer was rolling in and there were plenty of float trips to go around, but sometimes it is good to unplug. Our family has been going to the Gulf Coast for longer than I care to remember. I have hired guides before and had some good days as well as some not so good days on the waters along the panhandle. This year I hired David and he took me for a morning Tarpon trip. He predicted every migration of the big fish as they traveled from the bay, back to their daytime home where they slept away the day. There were three migrations of fish that morning and just like David predicted the third wave of fish was my best chance. I hooked up with one of the big fish and when the hook was set the fish turned and quickly cut the line. The fight was really over before it started, but it was a rush. 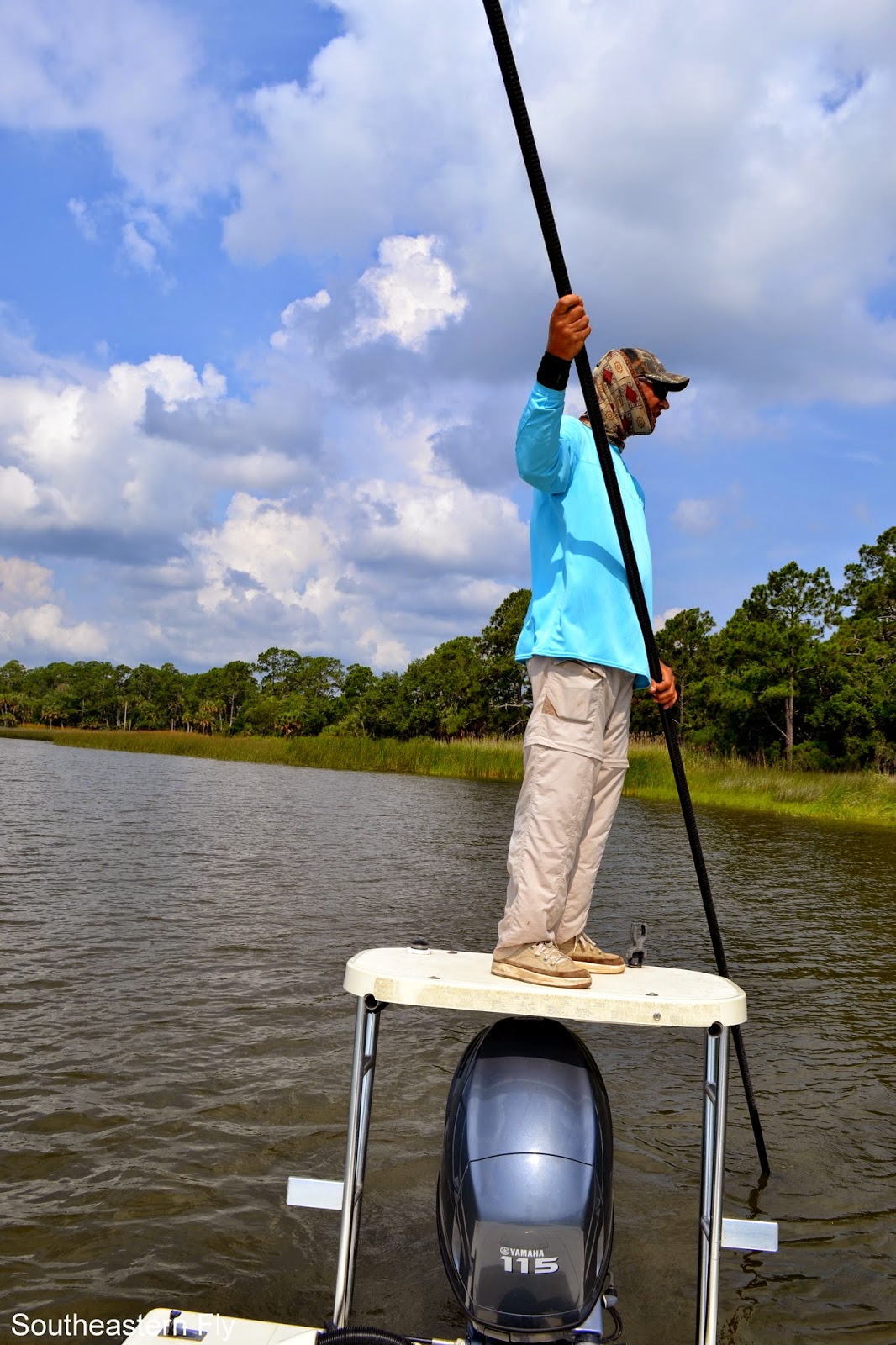 The day ended with us chasing sharks and then getting chased by a frightening storm, as we rushed across the bay for the safety of the harbor.  With my 4th state behind me and we spent the rest of the week on the beach and eating oysters along the coast. But as all good things go there is a time to point the car North and we were headed home. This time we were getting home a bit early to spend a day with anglers from the TN Project Healing Waters event on the Caney Fork. The quick drive back to Middle Tennessee was worth it and I spent the next day on the water with Bill and Jim, then Jim and Jim catching our share of fish. What happened next? Click Here.